There have been increasing calls in Egypt to censor certain Netflix content, while art critics believe it would be difficult to censor the work of the global network. 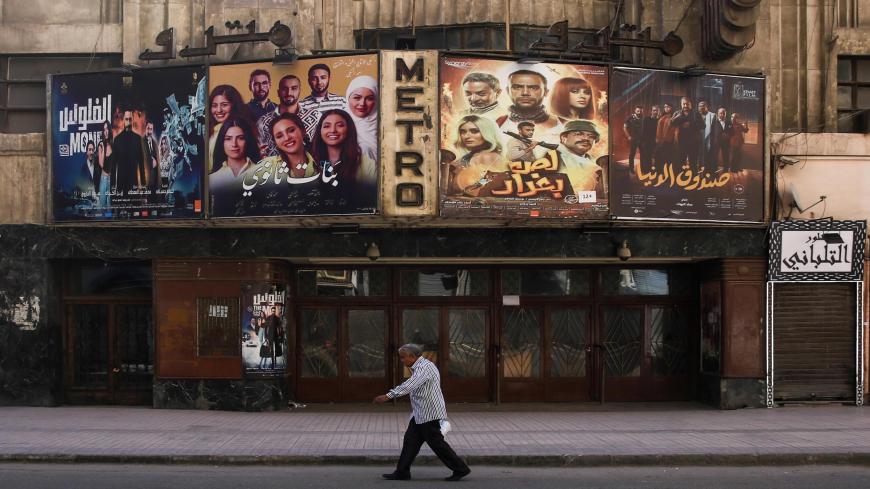 The historic Metro cinema theater is seen as a man walks past, along the commercial Talaat Harb Street in the almost deserted city center of Cairo, on the first day of Eid al-Fitr, Cairo, Egypt, May 24, 2020. - SAMER ABDALLAH/AFP via Getty Images

CAIRO — Egyptian member of parliament John Talaat submitted Sept. 5 a parliamentary question to Minister of Culture Inas Abdel Dayem in regard to the role of the Censorship of Works of Art (CACWA) in the content broadcast on Netflix.

“Some of these works carry transgressions and abuses that the Egyptian society does not accept, and the censorship standards must be strictly applied to any artwork that is allowed to be broadcast in Egypt,” Talaat said in a Sept. 5 statement.

In an Aug. 25 article in Al-Masry Al-Youm, journalist Suleiman Joudeh called on the Ministry of Culture and official bodies to review the works broadcast on Netflix.

Netflix's works have sparked controversy time and again, the latest of which was the film "Cuties" that topped Egypt’s Google search list on Sept. 13, after it arrived at the platform and was criticized for depicting children in a sexual and inappropriate way.

Talaat told Al-Monitor over the phone, “It is our [the Egyptian authorities] right to monitor the content that is broadcast inside the country, especially if it affects the principles and values of Egyptian families. This further coincides with the controversy over Netflix broadcasting content embodying the Divine Entity, and that is why we need to stop and reconsider this.”

Earlier in September, American actor Dennis Haysbert appeared as “God” in season five of the series "Lucifer," sparking controversy over this role.

Speaking about the possibility of the Egyptian authorities interfering to ban the Netflix application or some of its content, Talaat said, "I am waiting for a response from the Ministry of Culture to my parliamentary question. In general, any artwork broadcast in Egypt must be subject to censorship — no transgressions or abuses are allowed. Even if it is broadcast on an online application, it does not mean that the content is exempt from censorship. Insulting religious sanctities is a red line for the Egyptian people.”

Art critic Nader Adly told Al-Monitor that it is difficult to censor Netflix content, saying, “This matter [censoring Netflix content] is very difficult. It was easy to censor many artworks broadcast by Egyptian and sometimes Arab stations, but to censor an application of this importance is not easy at all and will not be allowed, especially since it is based on subscriptions with the full consent of the subscriber.”

He added, “Confronting what some describe as transgressions cannot be through blocking and banning [the application]. Those who do not want Netflix's work can simply choose not to subscribe and pay money for it, but it is illogical to impose censorship on global works that are not broadcast in Egypt alone. We suffer from such interventions in Egypt.”

Adly noted that freedom of art is still a subject of debate in Egyptian society, adding, “Some see freedom as an essential element, while others call for censorship. The authorities and society should be more understanding and refrain from banning artworks. This issue will always occupy a number of Egyptian parliamentarians who want complete control over culture, art and thought.”

Art critic Mahmoud Qassem told Al-Monitor over the phone, “Netflix always sparks controversy in its artwork, especially when it released the film "The Angel" [in September 2018], which tells the story of Ashraf Marwan. The film illustrated him as being a spy for the Israeli Mossad against his country, Egypt.”

The trailer of "The Angel" promoted in August 2018 caused an angry reaction from Egyptians and Arabs who considered the film propaganda in favor of Israel. At the time, the Egyptian authorities did not take any action regarding broadcasting the film on Netflix.

Although Qassem criticizes some of the artwork on Netflix by describing them as “pouring poison in honey, as they have very attractive works that may pass some anomalous ideas about Arab societies within them, such as sexual freedom,” he does not stand with imposing government censorship on the network’s content, but rather by competing with it through similar platforms.

Nora Hamed, a Netflix subscriber, told Al-Monitor that she was shocked by the demands to impose censorship on the artistic content displayed on the network, saying, "The freedom of creativity must be guaranteed and individuals who are bothered by certain content should simply refrain from watching. Content creators want to serve the goals of the message to be conveyed to the public. So imposing censorship will scatter this message and empty the artwork of its content.”

Meanwhile, a source in the Egyptian Ministry of Culture told Al-Monitor on condition of anonymity, “The ministry does not have the power to block or censor works broadcast on Netflix. The platform does not even submit a request to obtain our approval for the content it broadcasts in the first place.”

The source added, “Basically the Ministry of Culture does not have control over any work on the internet. Its role is only limited to monitoring shows in cinemas, theaters and on Egyptian satellite channels.”