Egypt joins Saudi Arabia, Kuwait and Qatar in banning the movie "Eternals," raising questions about freedom of creativity and expression. 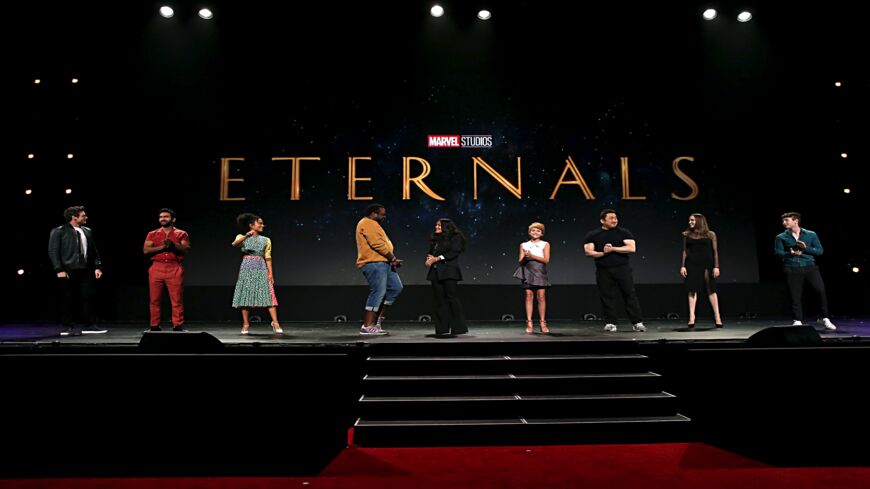 IMAX, one of the largest movie exhibitors in Egypt, shocked moviegoers on Nov. 9 by canceling the premiere of the movie "Eternals" one day before it was scheduled for nationwide release.

Ahmed Kalal, director of the development engineering department at Misr International Films, which owns IMAX theaters in Egypt, told Al-Monitor that the Central Authority for the Censorship of Works of Art (CACWA) first informed the company that the film would be suspended, and over the weekend CACWA decided to ban it permanently.

CACWA did not issue an official statement regarding the movie, and CACWA head Khaled Abdel Jalil refused to speak to Al-Monitor about the issue.

Egypt has thus joined other countries such as Saudi Arabia, Kuwait and Qatar in banning the movie.

The Hollywood Reporter quoted sources suggesting that the movie was banned because it contained two LGBTQ+ characters sharing a kiss, noting that Disney refused Saudi, Kuwaiti and Qatari requests to edit out such scenes.

"Eternals" star Angelina Jolie said at a press conference that she was sad for the audiences but proud of Marvel for refusing to cut the scenes that censorship authorities in Gulf countries objected to. “I still don’t understand how we live in a world today where there’s still [people who] would not see what the family Phastos has and the beauty of that relationship and that love. Anybody that is angry about it, threatened by it, doesn’t approve or appreciate it, is ignorant,” Jolie noted.

Oscar-winning director Chloe Zhao told Indie Wire that she expects censorship authorities in some countries to refuse to show LGBTQ+ scenes, noting, “There’s a big desire from Marvel and myself to not change the cut of the movie.”

Egyptians took to social media following the ban, some expressing frustration because they were looking forward to watching the movie, arguing that the ban decision is an interference in the free choice of viewers. Others supported the ban and wished that an official decision would be issued because the movie contains scenes that do not comply with the values of eastern, Arab society.

Film critic Tarek al-Shennawy told Al-Monitor that he was shocked to see the same movie showing in the United Arab Emirates and not in Egypt, since the latter is known for having a greater tolerance threshold when it comes to creative freedom.

"Eternals" has been showing since Nov. 10 in theaters throughout the UAE, Lebanon and Jordan.

“The problem is that we are not able to keep pace with the evolution. The movie may shock some but could raise questions that deserve answering for others,” Shennawy noted, adding that establishing a culture of freedom of choice gives societies protection and immunity, much like vaccines against diseases.

“Censorship authorities should only determine an age rating, not ban movies.”

Shennawy believes that the current cinematic climate in Egypt does not reflect any aspect of creative freedom, accusing CACWA’s decisions of aiming to please closed-minded people in society.

He attributed the ban or suspension decision to CACWA’s excessive fear of religious institutions such as Al-Azhar and the societal anger accompanying the screening of a movie that may shock some viewers.

Shennawy stressed that CACWA should not give in to everything that society wants since some groups have reservations about many issues, be it sexual, religious or political.

In 2014, Egypt banned the screening of the movie "Noah" after a fatwa by Al-Azhar prohibited “showing any works of art that embody prophets.”

Shennawy expressed concerns about the negative impact of such decisions on the film industry in Egypt as a whole, but at the same time he sought an excuse for those in charge of the censorship authorities, saying that they are state employees and cannot make decisions on their own. Rather, they are subject to institutional and societal pressure.

“The situation is very confusing and complicated, and no one can be happy with a ban.”

Ramses criticized what he described as the state of intellectual deterioration experienced by society, through which some of its groups exert pressure on censorship authorities.

He noted he does not agree with those claiming that "Eternals" promotes homosexuality, as it is impossible for a society to change its views on something just by watching a movie.

Ramses stressed that the world is moving toward accepting others regardless of their sexual orientation, and it is wrong to curtail creative freedom just because there are LGBTQ+ characters in a work of art.

He absolves state agencies, including CACWA, of what he called an exaggerated reaction to the movie. Rather, he believes that “the public's reaction to everything has become brutal.”

Ramses explained that some groups have become hostile and overly sensitive toward works of art, which made CACWA make such decisions for fear of any unexpected societal reactions.

He noted that online streaming platforms will enable the public to watch what they want in full despite any ban, which makes movie theaters the only losers in this equation. “CACWA is well aware that all types of content are available to the public online no matter what it decides,” Ramses pointed out, adding that filmmakers have begun to value the financial returns from online streaming platforms more than they do those from movie theaters.