The film "Stop Kissing Me" takes a satirical look at the romance scenes in Egyptian films, but risks getting the kiss of death from Egypt's censorship authority. 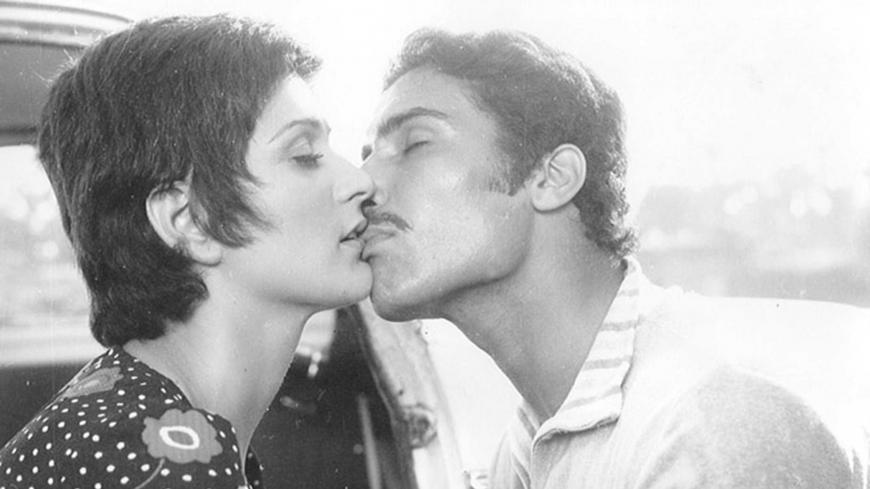 A still from director Youssef Chahine's 1972 film "The Sparrow." - ica.art

CAIRO — On the Egyptian screen, a kiss is not just a kiss, but a prelude to censorship. That's why many Egyptian directors limit kissing and sex scenes to a short peck on the lips before the lights dim, leaving the rest to the imagination of the viewers.

It is therefore no surprise that Ahmed Amer’s "Balash Tebosni" ("Stop Kissing Me"), a mockumentary that narrates the difficulties of a young director in shooting the perfect kissing scene, has been an adventure since 2014. The film had its debut at the Dubai International Film Festival on Dec. 7, but it remains unclear when or whether it will hit the Egyptian cinemas. Many critics expect the film to face difficulties from censorship authorities to get a permit for theatrical release in Egypt.

The film received an initial permit for its screenplay from the General Directorate for the Censorship of Artistic Works before shooting started in October 2014, despite the censorship authority’s earlier objections to the film’s name and to the kissing scenes. Amer stood firm against suggestions to reduce the kissing and the request to change the name to “Hikayat Qubla” ("Story of a Kiss"). Finally, the censorship authority gave its initial approval of the screenplay the same month and allowed the team to start shooting, postponing the discussion on the two issues until a copy of the film became available after completion.

After all the scenes were shot in March 2015, the immense task of obtaining copyrights started. The film had used clips from the most famous kisses in Egyptian films of the past and therefore permits were needed from the intellectual copyright owners. According to Amer, this process took quite some time.

The film takes a satirical look at the Egyptian cinema, particularly how it shoots kissing and sex scenes.The storyline includes a dispute between a young director, Timur, played by Mohamed Mahran, and one of the film's heroines, Fajr, played by Yasmine Raees, where Fajr chastely refuses to kiss the lead actor, although she has played in bold sex scenes in previous films.

Most of the Egyptian films of the 1950s, 1960s and 1970s included kissing scenes. Kissing on the big screen had begun by the 1970s, when the state-owned TV channels banned the 1969 film "My Father Is on The Tree," starring singer and actor Abdel Halim Hafez, because the film included too many kisses. Until this day, the film is known to Egyptian cinephiles as the film with the highest number of kisses — Hafez and the two heroines, Nadia Lutfi and Mervat Amin, kissed 42 times.

Tarek El-Shenawy, who teaches film criticism at the Cinematic Arts’ Institute, told Al-Monitor, “I expect 'Balash Tebosni' to face objections from the censorship authority before it is shown in theaters because censorship has become totally inflexible with kissing and sex scenes. [This marks] a sharp contrast to the old black-and-white films, where kissing and sex scenes were allowed by the censorship authorities in a time the society was more conservative, but [sexual] harassment was less widespread.”

He said, “In the old times, censorship authorities and society had a higher cultural level that allowed them to realize that sex was part of people’s lives and cinema had to show that aspect. Filmmakers made sure that romantic or sexual scenes were in the correct theatrical context — not just forced into the plot to attract attention as is the case in many films now that seek to attract young people. Filmmakers back then presented the movies in a refined way and portrayed romance with subtlety.”

When asked about the rules that should govern sex scenes, Shenawy said, “Censorship must respect the freedom of art and expression.” He said that removing or banning scenes is no longer useful in the internet era and that all banned films and deleted scenes are watched millions of times on YouTube. He said filmmakers must have a sense of "responsible freedom" in presenting the scenes in a way that is in line with the audience's culture and that does not manipulate the instincts and feelings of young people.

Art critic Nader Adly told Al-Monitor, “Egyptian cinema has presented several sex scenes in a symbolic way so that the audience understands that the characters in the film are having [intercourse] without [seeing too much detail]. This happens either through a classical kiss with dim lighting that does not show any details, through moving the camera far from the characters after the kiss happens under a red light or through the shadows of the characters on the walls during the [act]. All these are ways that reflect a sexual relationship without showing any details.”

Adly called on censorship authorities to give up their sensitivity toward sex scenes and to encourage works that tackle these scenes and relations in a refined manner, as occurred decades ago. He suggested that filmmakers relinquish explicit sex scenes as a way to promote their film among youths.

Rami al-Aqad, a cinema critic, told Al-Monitor that censorship authorities have the biggest responsibility when it comes to filmmakers using sex scenes to promote their work. “Censorship created a fertile ground for these scenes to lure teenagers and youths because the authorities took it too far in banning films or deleting scenes. Consequently, the scenes became more desired, because forbidden fruit is sweet. The more the censorship buzz about a film, the higher the ratings,” he said.

Aqad added, “Censorship banned the film '18 Days' and claimed that it uses indecent language. But it had high ratings online. 'Halawat Rouh' ['Rouh’s Beauty'] was also banned due to its sex scenes, but its internet ratings were high. The censorship authorities must realize that the audience goes to the movies and pays for a ticket to watch whatever they want — not what the authorities want.”

When asked about “Balash Tebosni,” he said, “The film was shown at the Dubai International Film Festival only, and I couldn't watch it. But I don’t think it will cause any problems with the censorship authorities. I hope the storyline will reveal the ugly face of censorship and its baseless stubbornness against some sex scenes as well as the true colors of some filmmakers who exploit sexual insinuations to promote their work. I think the rough patch the film hit with censorship was due to its name and some kissing scenes.”