A handful of Republicans are holding up a GOP resolution calling for a "gold standard" civil nuclear deal with Riyadh despite a Saudi lobbying blitz. 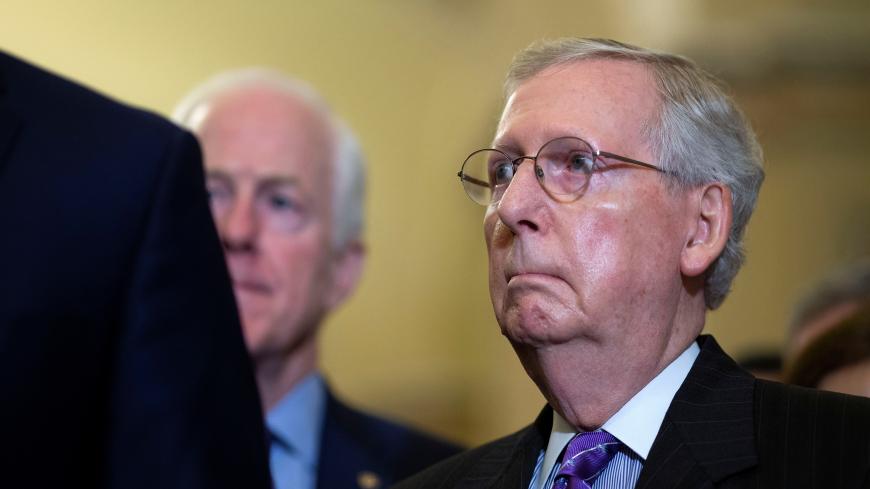 A handful of Senate Republicans are bucking their leadership by holding up a resolution calling on the Donald Trump administration to refrain from reaching a nuclear deal with Saudi Arabia that falls short of America's so-called gold standard.

Al-Monitor has learned from congressional sources that Senate Majority Leader Mitch McConnell, R-Ky., wants to unanimously pass a nonbinding resolution on the floor urging the Trump administration to “prohibit the Kingdom of Saudi Arabia from enriching uranium or separating plutonium on its own territory.” But several Republicans are objecting, casting doubt on Congress’ determination to weigh in on the Trump administration’s nuclear negotiations with the Saudis.

Because senators object to unanimous consent requests anonymously, it's not known who has concerns. McConnell’s office did not respond to inquiries about how many lawmakers have objected.

“This blocks both the plutonium and the uranium route to civilian nuclear energy being converted into a potential bomb,” the resolution's sponsor, Sen. Jeff Merkley, D-Ore., said at a July markup. “This is a standard that we are trying to establish everywhere in the world, and it is so important in the context of the Middle East and the dynamic in Saudi Arabia and Iran.”

Congress and the Barack Obama administration dubbed the domestic enrichment prohibition and other transparency measures as the “gold standard” in a civil nuclear agreement with the United Arab Emirates in 2009. But the Trump administration’s handling of the negotiations — and its rumored willingness to consider anything less than a gold standard agreement as it seeks to promote the US nuclear industry — have generated bipartisan concern in Congress.

“They’re keeping everything very close to their vest,” Sen. Ed Markey, D-Mass., told Al-Monitor. “In fact it’s like glued to their vest, so we have no ability to have any idea what’s going on.”

A week after Energy Secretary Rick Perry met with his Saudi counterpart Khalid al-Falih, Undersecretary of State for Arms Control Andrea Thompson told Congress that the Trump administration wants any agreement to adhere to “the strongest standard possible” and “ensure that the enrichment and reprocessing and those abilities do not get proliferated.” But lawmakers remain skeptical of Riyadh’s intentions.

March comments from Crown Prince Mohammed bin Salman, which indicated that Riyadh would seek a nuclear weapon if Iran did, have further stoked concerns that the Saudis could use US technology for such a program. Furthermore, Washington’s agreement with the UAE allows it to revisit the agreement if the United States secures a more favorable agreement with another country, potentially sparking a nuclear arms race in the region.

The Saudis have hired a small army of law firms this year to push the administration and Capitol Hill on the issue. The Saudi Energy Ministry directly hired four firms — Pillsbury Winthrop Shaw Pittman, King & Spalding, Gowling WLG and the office of David B. Kultgen, a former Saudi Aramco executive — in February and March.

Lobbying disclosure forms indicate that Pillsbury met with senior officials at the National Security Council, State Department and Energy Department in March. The firm also met with a staffer for Rep. Gregory Meeks, D-N.Y., who sits on the House Foreign Affairs Committee, in April. In July the firm spoke with another staffer on the House Energy and Commerce Committee about “a staff delegation visit to Saudi Arabia.”

Domestic interests are also weighing in.

According to lobbying disclosures reviewed by Al-Monitor, US-based Westinghouse has spent $540,000 this year lobbying Congress against both the Merkley resolution and a separate House bill — the Nuclear Cooperation Reform Act — that would force the administration to make prohibitions on a nuclear weapons program part of any agreement with Riyadh. The firm hopes that contracts for at least some of the 16 nuclear reactors Saudi Arabia wants to build will help it crawl out of bankruptcy.

The House bill, introduced earlier this year by Middle East panel chairwoman Ileana Ros-Lehtinen, R-Fla., would also require Saudi Arabia to sign on to an additional protocol on nonproliferation with the International Atomic Energy Agency, which Riyadh has not done.

Additionally, Al-Monitor has learned that the Nuclear Energy Institute, a trade association, unsuccessfully lobbied members of the Senate Foreign Relations Committee to go on record with a voice vote when it advanced the Merkley resolution in July. But Chairman Bob Corker, R-Tenn., convinced his committee to advance the resolution unanimously.

Corker told Al-Monitor that it’s unlikely the resolution can get a stand-alone vote on the floor by the end of the year. The Senate is busy with Trump's embattled nominee for the Supreme Court and myriad must-pass spending bills.

“But it could be attached to something else,” said Corker.

Both Corker and Ros-Lehtinen are retiring in January, leaving the future of both legislative items in doubt. The House Foreign Affairs Committee has not yet scheduled a markup on Ros-Lehtinen’s bill.

And Sen. James Risch, R-Idaho, who is likely to replace Corker as head of the Senate Foreign Relations Committee should Republicans hold the Senate in the midterm elections, has been less vocal on the issue. Risch’s home state hosts the Idaho National Laboratory, a nuclear research facility that hopes to build reactors for Saudi facilities.

In an emailed statement, Risch told Al-Monitor that he supports efforts to meet the gold standard with Saudi Arabia.

“However, it is not the only way to achieve the nonproliferation goals the United States advocates. Every [civil nuclear agreement] is different, but every [one] must, at a minimum, adhere to the same nonproliferation goals outlined in the Atomic Energy Act. I look forward to the congressional review a Saudi … agreement would require and ensuring US goals are being met.”