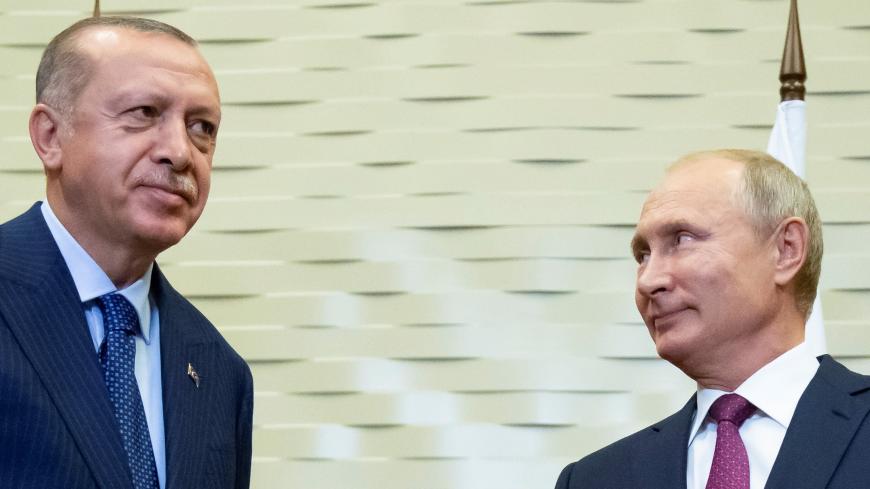 Last week in Sochi, Russian President Vladimir Putin backed off on his support for an all-out assault on Idlib in order to give Turkish President Recep Tayyip Erdogan one last chance to solve Idlib on Erdogan’s terms.

“The Sochi deal indicates that Putin considers it a priority to keep Erdogan on board in the Syrian theater,” writes Cengiz Candar. “The aim of such a strategy is to invest in the growing tensions between Turkey and the United States over the Kurdish presence to the east of the Euphrates. For Putin, not alienating Erdogan takes priority over launching an offensive to deliver Idlib to Assad. … Erdogan, during the joint press conference in Sochi, as if confirming Putin’s implicit game plan, drew attention to the areas east of the Euphrates and said terrorist activity is not confined to Idlib. The biggest threat to Syria's future lies in the nests of terror to the east of the Euphrates, he said, naming the Kurdish People's Protection Units (YPG) and the Democratic Union Party (PYD), both US allies in the fight against the Islamic State, as terrorist groups that must be brought down.”

Putin understood that Erdogan needed a win. At a summit in Tehran on Sept. 7, the Russian president sarcastically shot down Erdogan’s call for a cease-fire during a live press conference, an embarrassing loss of face for the Turkish leader. “In Sochi, Erdogan almost completely reversed the humiliation he experienced during the Tehran summit,” writes Candar. “Putin and Erdogan displayed an unusual warmth at the end of their two-hour meeting on Sept. 17 [in Sochi]. The two men smiled, and Erdogan affectionately squeezed Putin's right hand between his own. Following the meeting, Russian Defense Minister Sergei Shoigu announced there would be no new military operation against Idlib by Syrian government forces and their allies.”

The two agreed that a demilitarized buffer zone will be in place by Oct. 15. The arrangement in Sochi offers little new on how Erdogan — who has been trying, without success, to disarm and isolate the al-Qaeda-linked Hayat Tahrir al-Sham since the beginning of the Astana process in May 2017, when Idlib was designated as one of the four deconfliction zones — will be able to succeed this time.

Following his meeting with Putin, Erdogan said, “The opposition will remain where they are, but the [radical] groups that we will determine jointly with Russia won't be allowed to operate. The boundaries of the demilitarized zone will be supervised jointly."

“The question,” Metin Gurcan writes, “is how this comprehensive plan will be implemented in one month. Less than two weeks ago, at a meeting in Tehran, Putin had objected to Erdogan's call for a cease-fire, saying, ‘Hayat Tahrir al-Sham [HTS] and other radicals aren't at the [negotiating] table. We cannot give guarantees on their behalf.’… In return for the one month it gained at Sochi, Ankara is giving those guarantees on behalf of radical groups in Idlib. Perhaps Moscow has realized it couldn't cope with a humanitarian tragedy at Idlib and wants to guarantee the security of its military presence in northern Syria, notably Khmeimim air base, with Ankara’s assurances.”

“Now the most argued critical issue is, how can Ankara assure Moscow that Idlib radicals will agree to a demilitarized zone and removal of their heavy weapons?” adds Gurcan. “One likely answer is that Ankara will rely on its military power and its substantial influence on the armed opposition groups to convince them.”

As we have reported in this column the past two weeks, HTS and its Salafi brothers-in-arms, which control 60% of Idlib, have nowhere to go. Idlib is now a terrorist enclave on a par with Mosul or Raqqa prior to the US-led coalition operations that liberated those cities from the Islamic State. HTS is unlikely to disarm and demobilize to join the Turkish-backed National Liberation Front, except as a temporary tactic to live to fight another day for Islamic law in Syria. In the meantime, HTS and the Salafi armed gangs are already employing their tried and true tactics of using the people of Idlib as human shields, as well as detaining and torturing "traitors" to undermine accommodation by civilians and moderate opposition groups.

“There are also restraints on Ankara's military capabilities at Idlib, most notably the absence of air superiority,” writes Gurcan. “The Sochi summit didn't refer to air superiority, which shows the limits of Moscow’s confidence in Ankara. Moscow supports Ankara’s efforts for de-militarization, but doesn’t favor the idea of a no-fly zone and wants to hold on to Russia's dominance in the air over Idlib. Russia’s monopoly also means that, should clashes escalate around Idlib and Turkish troops are caught in the middle, Ankara will have to rely on Moscow for air evacuation and close-air support for those troops.”

“The Idlib operation, instead of being a high-paced, short-term operation, will drag on for eight to 10 months at a low tempo with occasional targeted attacks while negotiations continue,” Gurcan concludes. “Ankara now faces two important risks. The first risk is the security of Turkish troops serving around Idlib. The second, and probably more important, risk is the possibility that armed radical groups that resent Ankara’s mediation efforts will punish Turkey by launching terror attacks in Turkey. No doubt Ankara will be on high alert for such an eventuality.”

Fehim Tastekin speculates that “amid the military buildup at the Syrian border, the resurfacing of the Reyhanli file makes one question whether the Turkish people are being psychologically prepared for a possible ‘adventure’ in Idlib.”

“While moving military reinforcements to the Syrian border amid lingering tensions over Idlib, Turkey conducted an intriguing intelligence operation,” Tastekin reports. “On Sept. 12, Ankara announced that Yusuf Nazik, the accused mastermind of a 2013 twin car bombing in Reyhanli that claimed 53 lives, had been captured in the Syrian province of Latakia and brought to Turkey by the National Intelligence Organization (MIT). Public broadcaster TRT initially claimed that Nazik, a Turkish national, had been captured in a joint operation with Syrian intelligence. The channel removed the claim from its ensuing bulletins, while the state-run Anatolia news agency emphasized that the operation was accomplished entirely with national resources.”

Does Erdogan have Ocalan option in Syria?

“Syria,” writes Zaman, is the “immediate incentive for the [Turkish] government to seek Ocalan’s cooperation. With a showdown looming in Idlib … might Turkey feel compelled to co-opt the Kurds before the Syrian strongman does? The YPG has hinted that it might help the regime tackle al-Qaeda-backed militants in Idlib in exchange for the regime helping it drive Turkey and its Free Syrian Army [FSA] allies out of Afrin.”

“Turkey captured the Kurdish-dominated enclave of Afrin with Russia’s blessings in March,” Zaman explains, “dealing a severe blow to the retreating YPG’s morale and prestige. The group is waging a low-intensity counter-insurgency in Afrin amid allegations that the Turkish army is overseeing ethnic cleansing and abuse of local Kurds by its proxies. The YPG’s victims are mainly FSA rebels, however, which can only sharpen the Kurdish-Arab divide. As ever, the Syrian regime benefits the most.”

“Turkey gains as well, and pressure remains its favored approach,” Zaman continues. “It may be no coincidence that Erdogan is threatening to revive the death penalty, which was slapped on Ocalan at the end of his courtroom trial but later commuted in line with Turkey’s now-stalled bid to join the European Union. Some wonder whether the intent is to strong-arm Ocalan and the PKK into getting the YPG to submit to Turkey’s will, a tactic attempted (unsuccessfully) during the last round of peace talks. In practice, this means a full withdrawal of all PKK fighters from Turkey and leaving their weapons behind. The other Turkish hope is for the YPG to disavow the PKK — even as Ankara insists, with some merit, that they are one and the same — and to share power with Turkey-backed Syrian Kurds in the Iraqi Kurdistan-based Kurdistan National Council.”