Fourteen judges from the Supreme Court of Palestine announced their collective resignations Sept. 5 in protest against amendments to the Judicial Authority Law that would pave the way for the executive branch’s interference in the judicial sector. 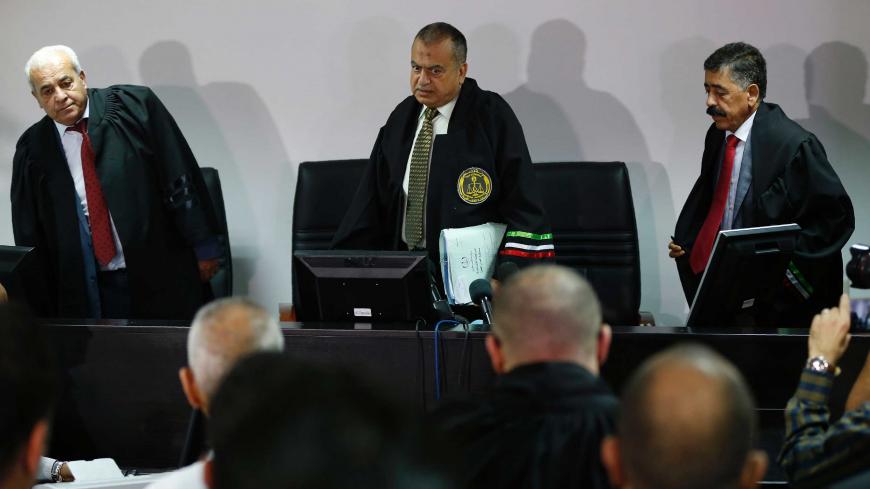 GAZA CITY, Gaza Strip — Judges from the Supreme Court of Palestine announced Sept. 5 their collective resignations in protest against amendments to the Judicial Authority Law. The amendments were suggested by the Justice Sector Development Committee, whose members are appointed by Palestinian President Mahmoud Abbas.

Abbas had issued a decree on Sept. 6, 2017, to establish the Justice Sector Development Committee in order for it to discuss ways and mechanisms for the development of the Palestinian judiciary.

The committee consists of nine people: the president of the Supreme Judicial Council, the minister of justice, the attorney general, the legal adviser to the president, the director general of the Independent Commission for Human Rights, the head of the Palestinian Bar Association and the deans of the faculties of law at the universities of Birzeit, An-Najah and Al-Quds.

The resignations were announced in a statement published Sept. 5 by the Palestinian Judges Association on its Facebook page.

“The recommendations of the Justice Sector Development Committee and the amendments to the Judicial Authority Law will only result in tightened control over the Palestinian judiciary,” the statement said.

The association called on Abbas “not to heed the recommendations of the committee as they undermine the independence of the judiciary and the principle of separation of powers and provide an easy tool for the executive authority to tighten its control over the judiciary.”

Osama al-Kilani, the chairman of the Palestinian Judges Association, told Al-Monitor that 14 Supreme Court judges had resigned in protest against the committee's recommendations. He said that the judges protested against the proposed amendments to the Judicial Authority Law. Chief among these amendments, he noted, is lowering the retirement age and forming a committee to evaluate the judges.

The Ramallah-based Supreme Court of Palestine is the highest judicial authority and is comprised of 27 judges.

Kilani pointed out that there have been no attempts to have the different points of view converge, and that they had not been contacted by any Palestinian officials to find out the reasons behind the resignations. He said the Palestinian Judges Association is likely to take escalatory measures in the event the mentioned amendments were approved, but expressed hope that this problem will be solved in due course.

“We cannot announce such measures before the Justice Sector Development Committee’s recommendations are officially and finally declared,” he added.

The committee's recommendations, published by the Ramallah-based Al-Haq human rights center, included an amendment to the retirement age of Palestinian judges from 70 to 65. According to Kilani, this recommendation has raised the ire of judges, who deemed it “a kind of exclusion” and “an attempt to exclude them from the judiciary in a legal way.”

Article 34 of the 2002 Judicial Authority Law No. 1 states that “judges over the age of 70 shall retire and those aged over 70 cannot be appointed as judges.”

Ammar al-Dweik, the director general of the Independent Commission for Human Rights and a member of the committee, told Al-Monitor that the Palestinian judiciary suffers from “very serious problems."

He said, "There is a significant decline in the Palestinian citizens’ confidence in the judiciary given its ineffectiveness and very slow work.”

Dweik said that the committee has completed its work and is in the process of drafting a final report that will be handed over to Abbas at the end of this week.

He pointed out that some judges had protested against some of the recommendations of the committee, especially regarding lowering of the retirement age, “because such an amendment would affect the judges of the Supreme Court and would lead to the retirement of a number of them.”

He noted that the Supreme Court judges are afraid of the Judicial Purge Commission, whose formation was recommended by the committee, saying, “Some of them fear that this committee will control the judiciary. This is a legitimate concern in light of the current political environment and the lack of confidence in Palestinian institutions."

Dweik, however, added that “the idea of the committee is good and we must be careful when choosing its members.”

Majed Arouri, the executive director of the Civil Commission for the Independence of the Judiciary and the Rule of Law, told Al-Monitor that the judiciary in Palestine is facing a specific problem. According to Palestinian human rights organizations, he said, this judiciary has failed to defend rights and freedoms.

“The judiciary has also failed to deal with the crimes that have spread in the West Bank. The executive branch deems this matter as a serious failure of the Palestinian judiciary, and it wants it to play a more effective role in dealing with issues that have a security dimension,” he added.

Arouri stressed that due to this failure the Palestinian judiciary needs to be reformed, and he said that there are serious attempts to do so.

He noted that the resignation crisis can be solved by forming an independent and impartial committee capable of “freeing the Justice Sector Development Committee’s recommendations from the amendments that worry the judges.”

He added, however, that “proposals and recommendations cannot be dealt with as a single package,” and called for the gradual implementation of these recommendations “in a way that reassures judges that the goal is to rebuild the judiciary, not to get rid of judges.”

In the event the amendments to the Judicial Authority Law would be approved, Palestinians of the West Bank would witness a “struggle” between the judiciary and the executive branch, putting the judicial sector in Palestine at stake and creating yet another crisis for Palestinians.