While IDF Chief of Staff Gadi Eizenkot warns of a new wave of terrorism in the West Bank, the Security Cabinet prefers to cheer President Donald Trump on his decisions against the Palestinians. 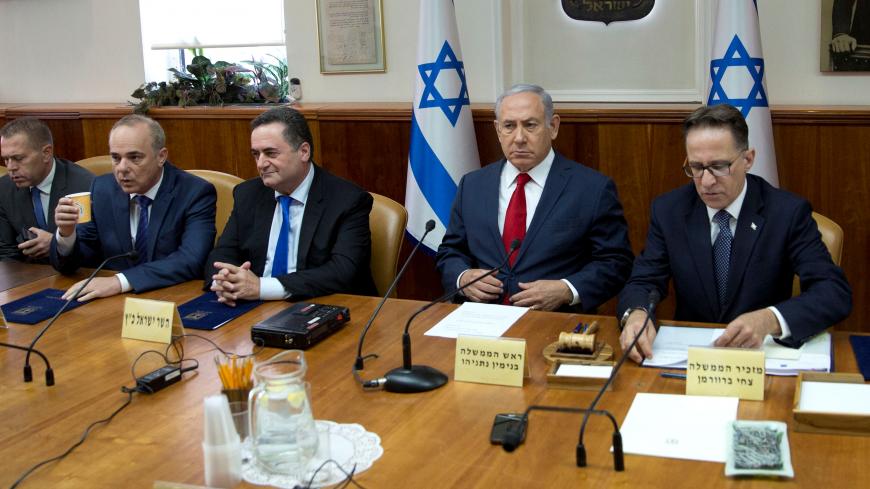 At a meeting of the Security Cabinet on Sept. 16, the chief of staff, Lt. Gen. Gadi Eizenkot, warned that the chances of a violent confrontation in the West Bank now stand at anywhere from 60% to 80%. He did not use the term “intifada,” but everybody knew exactly what he meant. This warning, which was apparently based on an assessment by the Research Division of Military Intelligence, should have set red lights flashing for all the ministers. After all, the chief of staff was telling them as clearly as possible that a new wave of terrorism could break out in the West Bank at any given moment. Yet they chose to cast aspersions on his assessment, apparently for the very reasons he said could lead to an eruption of violence.

IDF officials believe the main factor that could spark the violence is the punitive measures that the Trump administration has been taking against the Palestinian Authority.

Eizenkot also cited the failure of the contacts between the Palestinian Authority and Hamas, Palestinian President Mahmoud Abbas’ unstable relationship with the Arab world and his poor health as factors that could generate an escalation in the West Bank. That was relatively easy for the Cabinet to digest.

On the other hand, Cabinet members could not imagine that steps taken by President Donald Trump, which they consider positive, are considered dangerous by the IDF. These include such measures as relocating the US Embassy to Jerusalem, cutting off funding for the United Nations Relief and Works Agency (UNRWA), closing the PLO representative’s office in Washington and depicting Abbas as being opposed to peace.

On more than one occasion, the Cabinet and its individual members have congratulated Trump for his “courage” and for being a true friend of Israel. They are not really capable of admitting that the US president and his team know nothing about the tangled complexities of Middle East policy in general and the Palestinian-Israeli conflict in particular.

Trump has said of the Jerusalem issue, “We took it off the table,” claiming that progress in negotiations could now be made. But just about anyone who has taken “Palestinian-Israeli Conflict 101” knows that he didn’t solve anything. All he did is create a problem.

The Trump administration had announced that it is halting aid to UNRWA, which has long been the lifeline keeping Gaza from total collapse, without searching for any alternative to that aid. But failure to see the inherent risks of such a move is tantamount to shutting one’s eyes when faced with an obvious danger. Every single minister should have understood what would happen when Palestinians already living in abysmal poverty in Gaza are pushed up against the wall. They should not need to wait for Eizenkot to state forthright that the emperor has no clothes, that the president’s actions toward the Palestinians are dangerous and that Israelis will end up paying the price for Trump's reckless decisions.

At that Security Cabinet meeting, Eizenkot offered his assessment that if there is a conflagration in the West Bank, the IDF would be forced to increase its forces there significantly. In other words, it is not enough that the IDF is dealing with an escalation of violence on the southern front (Gaza). It will also be expected to pour forces into the West Bank, where friction with the Palestinians is exponentially more complicated than it is along the Gaza border. Added to this, of course, is the cost of a heating up of the northern border.

Even after the chief of staff’s chilling prognosis, the members of the Security Cabinet were silent. How could they possibly criticize a US president who fulfills their every wish and who lashes out weekly at Abbas, whom they loathe? It seems easier for them to sit in Jerusalem and cheer decisions made by the Oval Office in the White House than to actually make complicated choices.

This was not the first time that Cabinet members did not like what Eizenkot had to say and did nothing to forestall his chilling prognosis. In early February, Eizenkot warned the government that the humanitarian crisis in the Gaza Strip could lead to a military clash with Hamas over the next year. It took just days to see that his prognosis was accurate. Did the government respond to his warnings in real time? Did it take steps to ease the crisis in Gaza? The answer to both these questions is no.

Defense Minister Avigdor Liberman even contradicted the chief of staff soon after that meeting. At a gathering of his Yisrael Beitenu faction, Liberman said of Gaza, “There is no humanitarian crisis.” He added, “As long as there's no progress regarding the [Israeli] captives and missing persons, we can't move forward with all sorts of initiatives for [helping] the Strip. As far as its rehabilitation, it can only be on one condition — demilitarization [of Gaza].”

In June, some four months after Eizenkot warned the government about the situation in Gaza, he told the Security Cabinet yet again that it is was necessary to take steps to improve the humanitarian situation in the Gaza Strip so as to prevent an armed conflict with Hamas. This time, he made his remarks at the height of the very demonstrations along the border fence that confirmed his earlier warning. At the same Cabinet meeting, Eizenkot also presented various immediate solutions, such as the easing of restrictions on the border crossings and the development of various projects involving water, electricity, health and employment.

But the significance of what he was saying fell on deaf ears, and his remarks led to yet another clash between him and the minister of defense. Liberman opposed easing restrictions on Gaza, claiming that, “Hamas wants the siege lifted. It needs the siege lifted, not to develop the economy, but to smuggle in arms, smuggle in information, smuggle in all sorts of emissaries from Iran and Hezbollah.”

In the end, indirect talks between Israel and Hamas over a possible arrangement and easing the closure only began after a conflict erupted with Hamas, demonstrations broke out along the border fence, the Palestinians suffered a high number of casualties and the international community applied pressure on Israel.

Now, the same chief of staff is warning of a new intifada in the West Bank. Based on Cabinet officials’ past behavior, they are likely to reject his warnings. As far as they are concerned, there is no way that the fulfillment of their dream, that is, seeing Abbas humiliated and ground into the dust, could turn out to be a nightmare.