Prime Minister Benjamin Netanyahu would typically convene his Security Cabinet and security chiefs to avoid violence with the Palestinians, but this election season has altered business as usual. 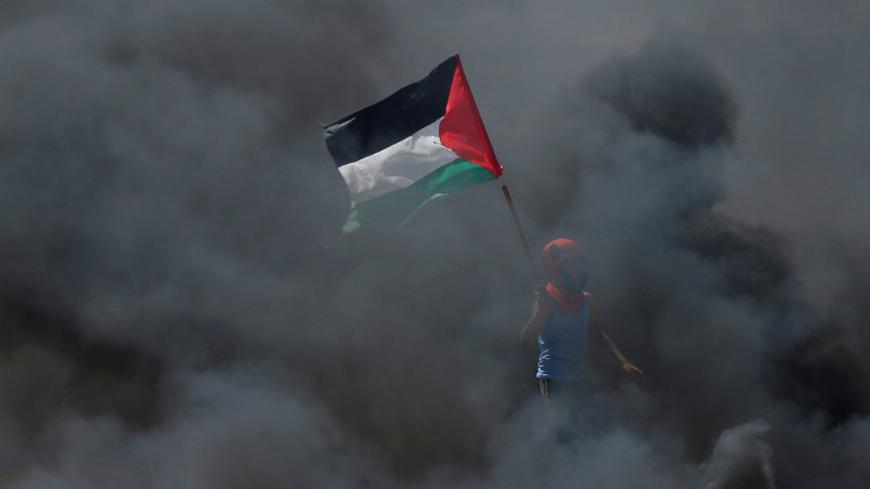 A boy holds a Palestinian flag amid smoke during a protest against moving the US Embassy to Jerusalem and ahead of the 70th anniversary of the Nakba (Catastrophe), at the Israel-Gaza border, east of Gaza City, May 14, 2018. - REUTERS/Mohammed Salem

A consensus continues to grow in Israel that another round of violence with the Palestinians is in the offing. The signs are evident in a series of events and escalations on all fronts. Despite this evidence and warnings by professionals and the heads of Israel’s security agencies, no one is lifting a finger to prevent a conflagration despite the potential for heavy losses on both sides. Why? Israel’s April 9 elections.

At any other time, Prime Minister Benjamin Netanyahu — a generally responsible leader with an aversion to adventurism — would have convened the Security Cabinet and security chiefs and attempted to douse the flames. These, however, are not normal times.

Netanyahu is in the throes of a desperate battle for political and personal survival that leaves him disinclined to extinguish such fires. In this fight, Netanyahu is competing for the support of right-wing voters against the likes of the New Right's Naftali Bennett, HaBayit HaYehudi's Bezalel Smotrich and Yisrael Beitenu's Avigdor Liberman. Any move on his part signaling hesitancy or moderation could harm his prospects for victory.

In recent weeks, Bennett, Liberman, Smotrich and Netanyahu have been going at each other with combative declarations, vehemently right-wing positions and blatant contempt for the Palestinians even as tensions with the Palestinians increase. All that remains is to pray that the explosion can somehow be staved off until April 10 and hope that after election day someone somewhere will come to his or her senses and try to restore calm. For now, only the Egyptians are attempting to do so.

The storm clouds are gathering. In recent days, Palestinians in Gaza have been launching explosives-bearing balloons toward Israeli border communities. These are different from the “incendiary” ballons and kites set on fire that caused numerous wildfires for almost a year but did not result in casualties. At the same time, the Israel Defense Forces (IDF) have intensified their retaliation, with tanks shelling Hamas positions every time a balloon explodes in Israeli territory.

Violent protests and nightly clashes between Palestinians and Israeli troops along the Gaza border fence are escalating. A delegation of Egyptian intelligence officials visited Israel and Gaza March 5 in an attempt to mediate, but without apparent success. Financial pressure on Gaza is also increasing, mostly at the instigation of Palestinian President Mahmoud Abbas, who is also under financial pressure and is repeatedly slashing Palestinian Authority (PA) funding to officials in Gaza. This month, the PA refused to accept the tax revenues that Israel collects on its behalf to protest Israel’s decision to deduct an amount equivalent to what the Palestinians pay the families of inmates in Israeli jails, including those convicted of terrorism. The productive cooperation between Israeli and Palestinian security agencies is also at risk.

Two other events also threaten the relative stability in the West Bank. One is the decision by Israeli prison authorities, under the direction of Public Security Minister Gilad Erdan, to install jamming equipment in security prisons to prevent Palestinian inmates from using cell phones smuggled in to them. The move has set off widespread unrest among prisoners and is spreading beyond the prison walls to the West Bank.

Of even more potential to cause volatility is the decision by the Islamic Waqf to reopen the Bab al-Rahma building, which Israel shut down in 2003. An improvised mosque has been set up on the site, next to the Gate of Mercy in Jerusalem’s Old City. On March 4, the Jerusalem Magistrate Court ordered the site cleared within a week. The Netanyahu government cannot afford to back down. In ordinary times, Netanyahu would have rolled up his sleeves, called Jordan’s King Abdullah and other influential Muslims and ordered Israeli security forces to do their best to ease tensions. This being an election season, however, the two sides keep thumbing their noses at each other.

The Temple Mount and Jerusalem are at the core of the Israeli-Palestinian conflict and are two of its most cogent symbols. The Israeli political right, like the Palestinians, will not consider any concessions on this issue. With Netanyahu fighting for every vote on the right to avoid losing to the rival Blue and White alliance, caution is not an option. Faced with the prospect of a defeat at the ballot box that could hasten his indictment on corruption charges and send him to jail, Netanyahu appears to be losing control. It is unclear whether he will step on the brakes before it’s too late.

The IDF’s latest annual threat assessment, issued at the beginning of 2019, warns of the increased prospect of Palestinian violence. Nonetheless, steps have not been taken to prevent such an outcome. Lt. Gen. (res.) Gadi Eizenkot, former IDF chief of staff, warned last September that a conflagration in the Palestinian arena was a far greater risk for Israel than any other threat. The way he saw it, a bloody conflict with the Palestinians could last for years — like the first (1997-2003) and second (2000-2005) intifadas — and be far harder to end than short-lived wars on other fronts — for instance the 34-day Second Lebanon War (2006).

Eizenkot had been successful during his 2015-19 term in containing an outbreak of knife attacks against Israelis. He prevented its escalation into widespread violence, at a relatively low cost, thanks to a policy of containment and restraint and differentiating between the assailants and the broader Palestinian society. There is no certainty that Israel would today be able to contain a similar outbreak to the same extent. On March 4, three Palestinians on the West Bank threw firebombs at an IDF post and then drove their car into a group of Israeli soldiers. Experts have described the car-ramming as “unusual” in the perpetrators first hurling the firebombs at targets.

Another key question is how long Abbas will continue to restrain Palestinian security forces and direct them to prevent clashes with Israelis. The recent loss of US financial support for the security forces, to the tune of tens of millions of dollars a year, has created an unprecedented economic crisis for the PA, and that does not bode well.

At 83, Abbas is a sick man facing the toughest decision of his life: What legacy does he want to leave? Will he decide, in the twilight of his tenure, to make a U-turn and let his people launch another confrontation with Israel or will he stick to his long-standing stance against terror and his conviction that it harms the Palestinian cause? Either way, with or without Abbas, Israel and the Palestinians are careening toward a point of no return at which a clash appears to be inevitable.