Can this Egyptian actor's photo in bed with another man send him to prison?

Egyptian actor Khaled Abol Naga posted an artistic photo of himself in bed with another man, and he may now face a ban from the Cinematic Syndicate and time in prison. 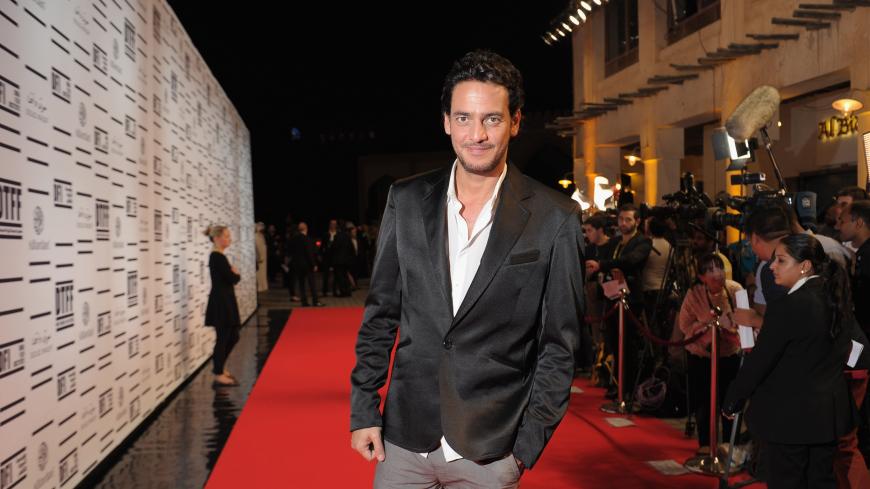 CAIRO — A photo and a gay pride flag on a T-shirt has spurred controversy and eventually a legal case in Egypt last month, targeting actor Khaled Abol Naga and the international clothing brand Bershka.

Lawyer Ahmed al-Ganzouri told Al-Monitor that both Abol Naga and Bershka risk facing legal charges under Article 294 of the Egyptian Penal Code. The article stipulates six months to three years of imprisonment for inciting adultery, immorality and prostitution, verbally, by implication, by signs or any similar means.

The Egyptian law does not explicitly criminalize homosexual relationships, but prosecutors often use the terms "debauchery” or “adultery” to bring up cases against homosexuality. Advocacy of gay rights are often taken under “incitation for adultery” by Egyptian courts. This includes carrying gay pride flags or logos in public spaces, as had been the case when a group of Egyptians waved a rainbow flag at a concert of Lebanese rock group Mashrou' Leila last year.

In the case of Abol Naga, the whole controversy started with a photo posted on Instagram Aug. 10 by the actor himself. The photo showed Abol Naga lying in bed, next to Egyptian actor Tamer Hagras. Faced with accusations that he was “gay” and “abnormal,” Abol Naga wrote that this was an old photo taken by his photographer friend Youssef Nabil. He praised the photo as "one that told a story, even if some people saw in the photo a 'batihka'" — a word that means watermelon in Arabic but is also slang to describe gays.

The actor tweeted the next day that the photo proved to be “the perfect opportunity to spread false rumors,” implying that he was not gay. However, he went on to defend gay rights against the homophobic statements he faced. He tweeted Aug. 13, “Discrimination against homosexuality is similar to race discrimination against people born with a dark skin. Gay people are born with an attraction toward the same sex, which is scientifically proven.”

In reply to a Twitter user who attacked him for his support for the gay community, on the basis that homosexuality is not in human nature, Abol Naga tweeted Aug. 25, “Sadly, this nature you are talking about … is the source of their sufferings. Homosexuality is not a choice. They are born with an attraction to the same sex instead of the opposite sex. For God’s sake, what else would ever make someone choose to become something that causes them pain, suffering and discrimination?”

Samir Sabry, a prominent lawyer in Egypt, filed a complaint against Abol Naga Aug. 14, before the Public Prosecutor. “It is clear that the defendant is promoting immorality, adultery and prostitution,” the complaint read. The Public Prosecutor had not yet responded whether the case would be pursued when this article was published.

A source in Egypt's Cinematic Syndicate, who preferred not to be named, told Al-Monitor that several members of the syndicate called for a petition against Abol Naga because of his tweets. The source said that although he personally did not approve the statements posted by Abol Naga, he did not see how he could be expelled from the syndicate or be punished because there were no regulations in the charter against “sharing posts of that kind.” But, for many members, the artist should be a good example and a role model for young people who look up to him, he said.

A source close to Abol Naga, who also spoke on condition of anonymity, told Al-Monitor that the posts on social media by the actor would not incite anyone to homosexuality — they merely aimed to support the gay community, which is persecuted and discriminated against in the country. The source stressed this discrimination is unacceptable in any society, even in a conservative society such as Egypt.

The source also noted that the Egyptian society has become more open to those who advocate for gay rights, but the “old guard” was ready to punish anyone who spoke out on homosexuality. He noted that the "systematic campaign" against the actor on social media was led by the "digital battalions of the Egyptian regime.”

Also in August, Bershka, the fashion store for women and men, which owns several branches in Egypt, faced a public reaction because of a T-shirt in its collection, after several social media users said that the T-shirt carried the rainbow flag.

The campaign against the brand started when Omar Gunz, the host of comedy programs on social networking sites, posted on Facebook a video from a Bershka branch in Cairo showing a T-shirt with the gay pride flag, the universal symbol of LGBTQ rights. Gunz accused the brand of promoting homosexuality. This video was removed by the Facebook management on the grounds of "promoting hate speech," but Gunz posted another video Aug. 13 explaining why the first video was removed and reiterating his demand for a boycott of the brand.

This prompted many Facebook users in Egypt and across the region to voice their anger on the official Bershka Facebook page. Bershka did not reply to any of the public comments.

Speaking to Al-Monitor through Facebook Messenger, a Bershka representative said the company had no comment on the issue of the "rainbow flag," and that the T-shirt was no longer available in any Bershka branch in Egypt.

Al-Monitor visited the two branches of Bershka in Cairo, to verify that the gay pride flag T-shirt was no longer sold. A manager at one of the branches, who spoke to Al-Monitor on condition of anonymity, said that the management of Bershka Egypt decided to remove the T-shirt from the stores in Egypt "out of respect for the feelings of Egyptian customers and to avoid losses."

The source in the store pointed out that the international management of the Bershka brand is responsible for designing and exporting clothing to its branches worldwide. He noted that the Egyptian management wasn't aware of the significance of the flag.