This is not the first time the LGBT pride flag has proven controversial in the Middle East. 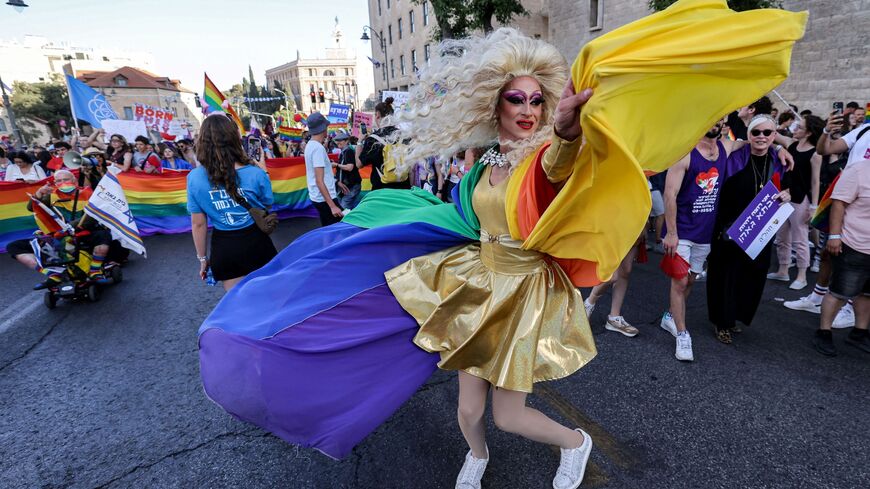 A drag queen dances with a rainbow-colored dress during the annual Jerusalem Pride Parade in the city center on June 2, 2022. - AHMAD GHARABLI/AFP via Getty Images

The rainbow flag representing pride for lesbian, gay, bisexual and transgender (LGBT) people has recently been the center of controversy in two Gulf states.

On June 14, the Saudi state-owned television station Al Ekhbariya ran a report on rainbow-colored toys and their supposed connection to homosexuality. In the video, the presenter interviewed a Ministry of Commerce official in a children’s toy store in Riyadh. Speaking before a pile of toys featuring rainbow colors, the official said the toys “promote homosexuality in an indirect way.”

The report then read, “Gay people flood global markets with toys carrying their colors and slogans.”

A similar development occurred in Kuwait soon thereafter. Yesterday, the Kuwaiti Ministry of Commerce and Industry published an image of the rainbow flag, saying it “violates morals.” They asked the public to report any uses of the flag.

Both events coincided with Pride month, which LGBT, queer and other people celebrate around the world in June.

Many countries in the Middle East and North Africa criminalize same-sex activity, including Saudi Arabia and Kuwait. Lebanon and Tunisia do as well, despite being known for their relatively liberal societal norms. Turkey, Israel and Jordan notably do not criminalize being gay.

The LGBT pride flag has been the source of controversy in the Midd le East before. Last year, some social media users in Egypt reacted with outrage when the Central Bank printed a multicolored 20-pound note that somewhat resembled the rainbow flag.

In 2020, the European Union, the United Kingdom and other embassies in Iraq hoisted a rainbow flag for International Day against Homophobia, Transphobia and Biphobia and posted a picture on Twitter. After receiving backlash from some Iraqis, the European Union deleted the tweet.

In 2017, some concert-goers in Egypt waived the rainbow flag at a show performed by the Lebanese rock band Mashrou’ Leila, whose singer is openly gay. Several people were arrested as a result, including Sarah Hegazi, an Egyptian lesbian woman. She was tortured in jail and eventually committed suicide in 2020.