The Central Bank of Egypt shared its initial designs for the new Egyptian banknotes, but was heavily criticized when many Egyptians took the reflective watermark for an LGBT pride flag. 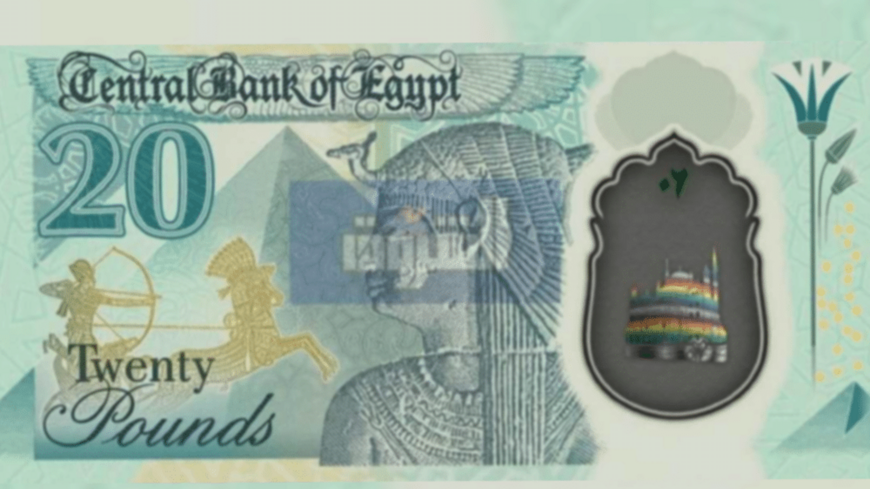 CAIRO — The first pictures of Egypt's new banknotes, known as the “plastic banknotes,” were published online Aug. 1. The images went viral as many viewers were offended by the 20-pound note's watermark of the Great Mosque of Muhammad Ali, which appears rainbow colored in pictures some said resembles the LGBT pride flag.

In July, the Egyptian government announced plans to change some of its traditional banknotes to polymer bills with new designs, starting with the 10- and 20-pound notes. The Central Bank of Egypt plans to launch the new banknotes at the beginning of November.

These notes will have a longer life span than paper notes with their durability and resistance to moisture. They are also made of recyclable materials.

Some believe the rainbow-colored historic mosque is a desecration of an Islamic symbol. They say it's not appropriate for the currency of an Arab Islamic country and demand a change.

Others said that the colors of the rainbow are often used for aesthetic purposes and should not be considered controversial, stressing that the 20-pound note appears rainbow-colored in pictures because the watermark is reflective, a property that protects against counterfeiting.

Others objected to the design itself, saying that it does not reflect Egyptian civilization and identity. They criticized the image of Al-Fattah Al-Aleem Mosque depicted on the 10-pound note, saying it was inaugurated only two years ago and ancient mosques in Egypt ought to be used in the design.

Some activists shared banknote designs created by Egyptian artists, saying that they are much better than those published.

The Central Bank of Egypt issued a statement Aug. 3 in response to the controversy, saying that the published designs have not been approved definitively and are still subject to modification.

Speaking about the watermark on the 20-pound note, the statement explained that a rainbow is not part of the design and does not look like one in person. It is a modern technology recognized globally for securing printed banknotes. When the new banknotes catch the sunlight, the watermark flashes only one or two colors at a time.

Rashad Abdo, an economist and head of the Egyptian Forum for Economic and Strategic Studies, told Al-Monitor that the designs put forward by the Central Bank of Egypt are only a draft. If the Egyptian public is not pleased they can be modified, so there really is no crisis, he said.

Abdo expects the Central Bank to convene a committee to review the public's opinions and reach a final design.

Lawyer and human rights activist Negad el-Borai told Al-Monitor that the LGBTQ community is slowly growing in Egypt but society still strongly rejects it. He explained that the LGBT community was rejected in Europe and the United States until recently. The United States prevented members of the community from serving in the military, but it now grants them rights. “Egyptian society is still in the rejection stage.”

From a legal perspective, Borai noted that the word “homosexuality” is not mentioned in Egyptian law, but the law imposes penalties for "immorality." Homosexuality is usually treated as debauchery, he said, explaining that this phenomenon is not singled out by the law because it has not been common in Egypt.

In 2017, the Lebanese band Mashrou’ Leila played a concert in Cairo during which rainbow flags symbolizing the LGBT community were raised. Egyptian authorities arrested a large number of people who organized and attended the concert and charged them with immorality. Many Egyptian news outlets criticized the LGBT community, describing its members as deviants and sick. In January 2018, the Criminal Court decided to release the detainees.