Qatar’s human rights record is under scrutiny in the lead-up to the World Cup, particularly regarding the treatment of LGBTQ people and laborers. 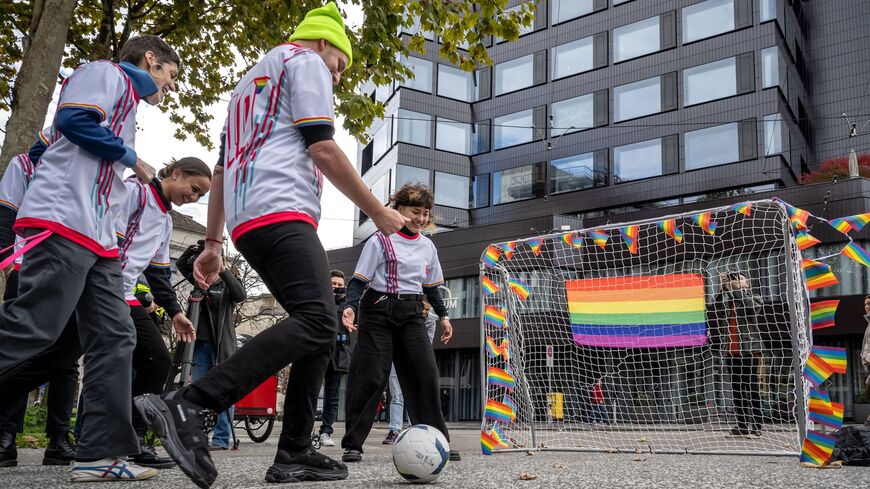 Activists play football during a symbolic action by LGBT+ associations in front of the FIFA museum in Zurich on Nov. 8, 2022, to call FIFA to defend the rights of the LGBT+ community ahead of the Qatar 2022 FIFA World Cup football tournament that will start on Nov. 20. - FABRICE COFFRINI/AFP via Getty Images

Qatar’s public relations issues ahead of the 2022 World Cup continued today when comments made by a Qatari official on homosexuality surfaced.

What happened: The German news outlet ZDF broadcast an interview with Qatar’s World Cup ambassador Khalid Salman today. Salman, a former player for Qatar’s national team, referred to homosexuality as “damage of the mind” and “haram” — an Arabic-language term that refers to prohibited acts in Islam — during the interview.

Homosexual acts have traditionally been forbidden in Islamic law, though a small number of clergy have become more accepting of LGBTQ people in recent years. Same-sex sexual activity is illegal in Qatar, as it is in many other Muslim-majority countries.

Why it matters: Qatar has received a large amount of international criticism in the lead-up to the World Cup, which begins Nov. 20. Qatar will be the first country in the Middle East and the Muslim world to host the soccer (association football) tournament. Since being awarded the hosting rights in 2011, Qatar has been scrutinized over the treatment of foreign workers, repression of LGBTQ people and more.

The Guardian reported last year that 37 workers have died in direct relation to building World Cup stadiums. The largely South Asian men working to prepare for the tournament often contend with difficult working conditions and many of their deaths remain unexplained. On the other hand, the International Labor Organization said Qatar has made some improvements regarding working conditions in a September report.

The criticism has picked up recently. In October, Germany’s interior minister criticized the awarding of the tournament to Qatar, which prompted the Qatari government to summon the German ambassador. Days earlier, Human Rights Watch released a report alleging that Qatari police were abusing LGBT people. British journalist Patrick Strudwick, who reports on LGBT issues, released a particularly harrowing report in October alleging that Qatari officials gang-raped a man “for being gay.”

The criticism prompted the Emir of Qatar, Sheikh Tamim bin Hamad Al Thani, to lash out in late October against what he described as an “unprecedented campaign” against Qatar.

“I think there are some people who don’t accept that a small country in the Middle East is hosting such a global event,” said Thani.

Know more: Other Gulf states have been embroiled in similar controversies related to LGBTQ people this year. In June, Saudi state media aired a report tying rainbow-colored toys to homosexuality. The Kuwaiti government also asked the public to report images of the LGBTQ pride flag, which has rainbow colors on it. In September, several Gulf states warned Netflix over LGBTQ content.