Is 'The Wedding' new beginning for LGBTQ cinema in Egypt?

Film director Sam Abbas' "The Wedding," which tells the story of a gay man forced into a heterosexual marriage, will be screened privately and by invitation only in the Middle East, making the already controversial movie even more controversial. 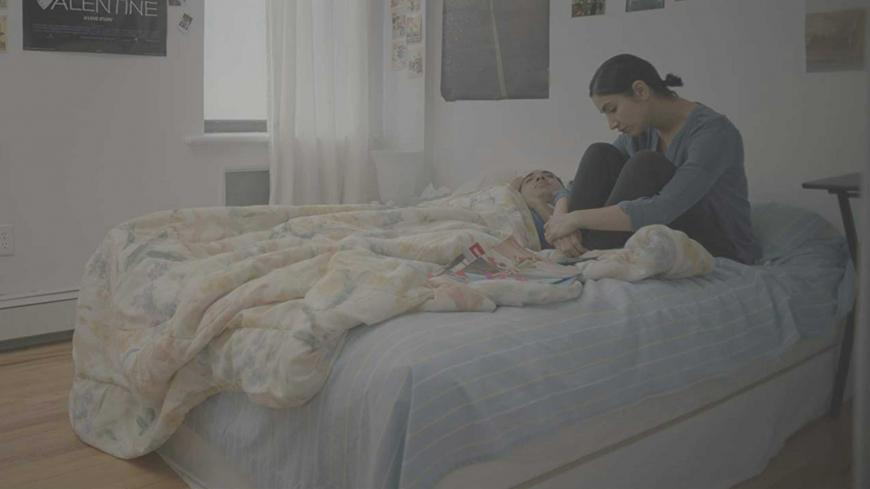 A man and a woman are together in bed in a dimly lit bedroom. He remains motionless and distant, engrossed by something on his laptop, as she snuggles against him, trying to attract his attention. This is the opening scene of the trailer of “The Wedding,” the forthcoming movie by the Egyptian American director Sam Abbas. It foreshadows the marital disaster to come.

Abbas' film features the story of Rami, a homosexual Egyptian Muslim played by Abbas, who is forced to marry Sara, played by Nikohl Boosheri. The movie is scheduled for a November release, but the trailer, posted Aug. 23 on various movie sites, has already caused a stir. “The Wedding” has also made international headlines in various industry magazines as the first Egyptian queer movie, although a number of other Egyptian films have addressed homosexuality since the 1970s.

Abbas, who also wrote the screenplay, told Al-Monitor that the film is meant to lend support to homosexuals living in conservative societies, sending the message that they are not alone. “I would really hope that people who have watched the film walk away with the understanding that life is too short to have a double life,” Abbas said. “That's how I felt, and that’s why I made this movie.”

“The Wedding” is the first movie produced by ArabQ, the newly established Alexandria-based film company dedicated to supporting LGBTQ rights. Abbas and an Egyptian producer who has chosen to remain anonymous co-own the company, which they are positioning as producing feature films as well as documentaries focusing on the LGBTQ community. It is required that all projects have a self-identified queer, gay, lesbian, bisexual or transgender director or lead producer.

Locating ArabQ in Egypt is likely to pose some challenges because of the country's conservatism and opposition to homosexuality. A 2013 survey by the Pew Research Center showed that 95% of Egyptians believe that society should not be accepting of homosexuality. This attitude also prevailed among overwhelming majorities in other predominantly Muslim countries, including 97% in Jordan, 94% in Tunisia and 93% in the Palestinian territories.

The Egyptian government has periodically cracked down on homosexuals as well as people advocating gay rights. In 2017, authorities arrested seven people on charges of debauchery after they raised a rainbow flag during a performance by the Lebanese rock group Mashrou’ Leila. Earlier this year in Alexandria, police arrested 10 other people for alleged “debauchery,” a term used to describe gay and transgender people or anyone suspected of homosexuality.

Abbas decided nonetheless to base his company in Alexandria, announcing this decision at the 2018 Berlin International Film Festival in February. “I was born in Alexandria!,” Abbas exclaimed. “I guess we’ll see if the company will face challenges, but following the launch we received many unsolicited scripts.”

Abbas told Al-Monitor that screenings of “The Wedding” in the Middle East will be private and by invitation only. The countries where the screenings will be held won’t be announced until after the film’s official release. Some critics have suggested that the private screenings give the impression of confirming that the movie contravenes social norms. Very few have seen the actual movie.

“Promoting freedom is a good idea to be adopted by a film production company, but promoting only ‘homosexual cinema’ is something weird,” the critic Tarek el-Shennawy said to Al-Monitor. According to Shennawy, ArabQ will not only face religious, ethical and social opposition but also legal challenges.

“There is a difference between ‘discussing’ and ‘promoting’ LGTBQ cinema,” Shennawy told Al-Monitor. “Egyptian society is very conservative, and promoting [gay] cinema won’t be accepted by society. Various Egyptian films have taken up the question of same-sex relationships, but in different ways. I’m against closing the door and saying that society won’t accept [any discussion of] the topic. Homosexuality exists in the entire world, and everybody knows about it. The question is how to discuss it.”

As noted, Egyptian film directors have addressed the issue of homosexuality since the 1970s. The post-1973 period was an era of greater ideological and artistic freedoms under President Anwar Sadat, as he wanted to open Egypt's doors to private investment following the 1973 war with Israel.

Despite the relative permissiveness of the era, however, most filmmakers only dealt with homosexuality gingerly or briefly or presented it as a “disease” or a mental illness to be treated. Only a few films showed homosexuals as ordinary members of society.

Among them, 1973's “Hamam el-Malatily” (The Malatily Bathhouse), directed by Salah Abou Seif, the pioneer of realism in Egyptian cinema, is one of the few to daringly discuss homosexuality without judgment. Its sexually explicit scenes caused the film to be banned throughout the late 1970s and 1980s. It was finally screened in cinemas with the sex scenes and nudity removed. It is still banned from Egyptian TV.

In Samir Seif’s 1977 “Cat on Fire” — an adaptation of the Tennessee Williams play “Cat on a Hot Tin Roof” — homosexuality is one of the issues contributing to the unhappy household depicted, but there are no overt scenes of the gay relationship. In "Alexandria ... Why?" (1978), Egypt’s legendary director Youssef Chahine briefly focuses on a rich Egyptian man who has an affair with a British soldier.

In the 2000s, same-sex relationships became more openly discussed in Egyptian cinema. The 2006 “Yacoubian Building,” directed by Marawan Hamed and based on Alaa el-Aswani's novel of the same name, features a journalist, played by Khaled el-Sawy, who is ultimately killed by his gay lover. The movie was not only controversial, but also a box office success.

Hany Fawzi’s 2013 “Asrar A’elya” (Family Secrets) also sparked controversy. Based on a true story, it deals with an 18-year-old who was sexually abused by his older brother throughout childhood. The main character refuses to accept his homosexuality and seeks “normalcy” throughout the film.