Millennials and post-millennials read differently than their elders, as they are faster in skimming, better in sharing and interested in interactive literary works. 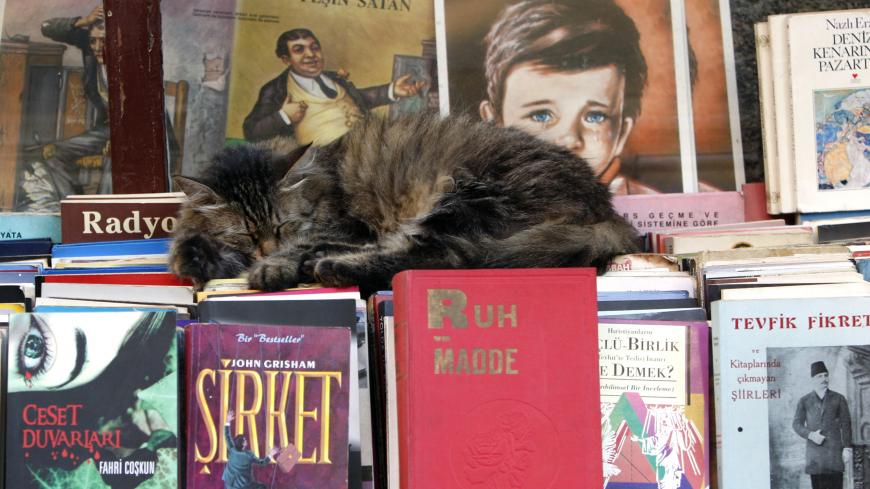 A cat sleeps on books at a secondhand bookstore in downtown Istanbul, Turkey, June 26, 2009. - REUTERS/Murad Sezer

They skim texts faster, love sharing punchlines and prefer interactive literary works. Although some Turkish millennials say they have no time to read, others claim to have a wide interest that stretches from Turkish classics to new-generation idols, such as Emrah Serbes and Murat Mentes.

“Young readers are interested in popular science, personal development books, aphorism collections, action, love stories, science fiction novels and poetry,” Nazli Berivan Ak, an author and editor at April Publishers, told Al-Monitor. Ak said that millennials and post-millennials attend book fairs, authors’ readings and book-signing sessions. “They also follow interactive literature quite closely,” she added, referring to April’s book series called “Perfect Mistakes,” which has been on the bestseller list ever since its launch in 2011. The first book of the series was Heather McElhatton’s “Pretty Little Mistakes,” described as an “interactive hyper fiction” where the reader can direct where the story will go and finish off with one of the 150 possible endings.

“In this series, readers get to choose their own adventure and reach different conclusions based on their choices. Young readers in Turkey love being part of the story,” she said.

She emphasized that sometimes an old classic becomes popular in the new generation. For example, “Madonna in a Fur Coat,” by Sabahattin Ali and published in 1943, has gained unexpected fame after 2009. Since then it has been on the bestseller list.

Salih, a 16-year-old high school junior from the central Anatolian city of Afyon, told Al-Monitor, “I bought the book to impress the girl I liked, but once I started reading it, I saw that it is quite enjoyable. It is not just sensational romance but deals with social issues. It was the first literary work I read from Sabahattin Ali.”

Indeed, Ali’s work came from the dustbin of history and gained a popularity surpassing any other contemporary fictional work because it resonates with today’s conditions: loneliness, corruption and government pressure against individual liberties in the name of national security. Talking to millennials and post-millennials (age group 15-24) from Ankara, Istanbul, Diyarbakir, Afyon and Trabzon, every person Al-Monitor interviewed had heard about the book. Some of the familiarity is because lines from the romantic novel are often quoted in social media.

Social media plays a strong role in reading choices for Turkish millennials and post-millennials. Zeynep, a 21-year-old born and raised in Ankara and currently studying in the United States, told Al-Monitor, “If I can follow the author on social media, I am more interested in reading their books. Instagram is particularly important because it is like a treasure hunt that we see the impact of their life on their writing. Also, the comments about the book are valuable for me.”

She continued, “If someone I respect endorses the book, then I will reach for it. My library is not big. I try to also buy e-books whenever possible.”

According to a 2011 survey by the Ministry of Culture and Tourism, possibly one of the most detailed studies on Turkish reading habits, women read more than men — 7.3 books annually compared to men’s 7.1. Speaking to its small survey group, Al-Monitor also found that the girls interviewed read more than the boys. Yet reading is not among the top recreational activities for either gender. According to a 2016 survey by the Turkish Statistics Institute (TUIK), Turks on average watch six hours of television, surf the internet for three hours and spend merely one minute reading books daily. Perhaps President Recep Tayyip Erdogan had a valid point when he proposed library-equipped coffeehouses that would offer free tea and cake in his last election campaign.

Young female readers have their own heroines. One of them is Ipek Ongun, the author of the series “The Secret Diary of a Young Girl.” Ongun has been writing the series since the 1990s. The original character now has a daughter who has become one of the key characters. Although these books are quite popular among middle school and high school girls, their appeal decreases as the readers grow up. Azra, an 18-year-old college sophomore from Istanbul, told Al-Monitor, “My older sister and I read all the books upon our teacher’s recommendation. For many public schools, Ongun’s books are approved because they are so square. I think I read through them because there was nothing else available. But let’s face it, they fail to handle real female problems. I would rather have my daughters read something higher quality.”

Some millennials are more attracted to popular fictional characters than the authors who write them. These characters creep into conversations and social media. Hakan, a freshman from the northern city of Trabzon studying engineering, told Al-Monitor, “I think in our times it is the characters rather than books or authors that stick with us and dominate our conversations. For example, I started reading Alper Caniguz because I kept hearing about the character named Alper Kamu.”

Alper Kamu, whose name often pops up in social media and hashtags, is the main character in Caniguz’s detective novel “Sons and Suffering Souls.” He defines himself as “the little existentialist” and speaks in punchy and highly quotable one-liners, such as “Five is the ultimate age of maturity, then rotting sets in.”

“I saw a slogan on social media from Caniguz: ‘People are born, then they die, then they grow up.’ It resonated with me,” said Hakan.

Ayca, a 20-year-old high school graduate who works as a cashier, named Murat Mentes as her favorite author. Although she had a hard time recalling the author’s name, she knew the characters in his novels particularly well. “The characters are super cool. I read ‘Dilemma of the Stuntman’ [‘Dublorun Dilemmasi’], as the main character was named Noah Storm. Noah [Nuh] is the name of my boyfriend. It is a fun and courageous character, so I started reading detective novels now and I enjoy it. It also has a lot of sentences I can share with my boyfriend,” she said.

Some of Mentes’ books were translated into English, along with other millennials’ idols such as Caniguz and Emrah Serbes, whose satirical short story “The Terrorist Upstairs” mocks Turkey’s ultranationalists and was adapted for the stage.

Several millennials and post-millennials also emphasized an online platform called Wattpad, where users write and read each other’s stories. There are more than 3.5 million registered users in Turkey, and 5% of these are authors.

Ziya, a 22-year-old from Diyarbakir who works at his father’s coffeehouse, told Al-Monitor, “I learned about Wattpad when I was in Istanbul during my military service. It was difficult to buy or carry books around, but Wattpad is right there on your phone or the iPad. I got hooked on different authors; it is a free platform. It is not edited, so you get to read people writing as if they are speaking. It is not pretentious. If there are grammar mistakes or other sort of stuff, who cares? What I like is the story and interaction with others.”