Has Egypt's Nobel laureate lost his appeal among country's youth?

Naguib Mahfouz's books have sold less than 1 million copies over the last 12 years. Are Egyptian youth indifferent to the country's Nobel laureate or can they simply not find a copy to buy? 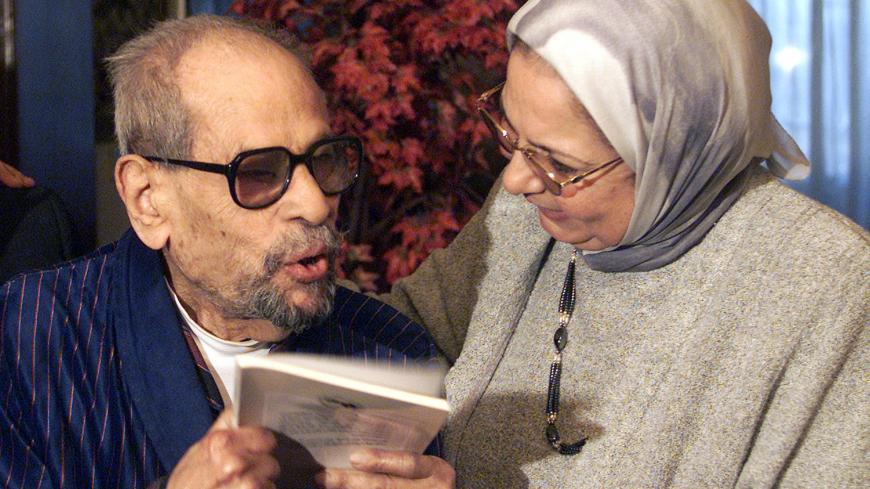 Egypt's Nobel Prize in Literature laureate Naguib Mahfouz (L) talks with Salwa al-Aanani, the author of his latest biography, after receiving the book a day before his 90th birthday in his home in Cairo, Egypt, Dec. 10, 2001. - REUTERS

CAIRO — Over a period of 12 years, 650,000 copies of Egyptian novelist Naguib Mahfouz’s books have been sold — a figure that has spurred a heated debate whether this signifies a commercial success or a failure to promote the country’s Nobel Prize in Literature laureate, particularly among the youth.

According to Dar El-Shorouk, the publishing house that owns the exclusive publishing rights to Mahfouz’s works in Arabic, the number of books sold is a success. The publisher said in a March 15 statement that the works of Mahfouz have been published “in unprecedented numbers” and “in several editions for each book.”

It continued, “Some books had more than 16 editions, and we published around 650,000 copies in 12 years. We hope we will reach 1 million [sold copies] of Mahfouz’s books in the coming months due to the interest of our readers. This is a unique achievement for Arabic-language literature.”

Egyptian novelist Hassan Abdel-Mawgoud believes just the opposite. “The number of books sold is dissatisfactory and it does not match Mahfouz’s status [as one of Egypt's best-known authors]. Mahfouz’s 54 novels and short story collections were printed in 54,000 copies per year, which means 1,000 copies for each book, in a country with a population of more than 100 million people, 74 million of whom can read. These low rates are not due to Mahfouz’s books or classics in general,” he told Al-Monitor.

For Abdel-Mawgoud, the “crisis of reading classics” is simply caused by the policies of the publishing houses that have obtained the sole publishing rights of Egypt’s classics writers such as Yusuf Sibai, Ihsan Abdel Quddus, Yusuf Idris and Tawfiq al-Hakim. He attributed the decline to the publishers’ failure to develop policies that would enable those writers’ works to reach a larger audience, either through making more copies available or lowering prices. On the contrary, he pointed out, the publishing houses stop printing copies of a book altogether if they think the profit margins are low.

Abdel-Mawgoud's opinion triggered a debate when he posted some of his views on the monopoly of publishing houses on his Facebook page March 12, accusing Dar El-Shorouk of maintaining a monopoly over Mahfouz’s books.

The post, which many novelists and authors supported by likes, said, “We, the Egyptian intellectuals, call on the Ministry of Culture to take action against Dar El-Shorouk publishing house to take away their rights to publish Mahfouz’s books … given [Mahfouz’s works] international importance, Egyptians have the right to strip the [company] of this monopoly.”

Novelist Ashraf El Sabbagh agreed with Abdel-Mawgoud that there is a problem of distribution and availability of classics in Egypt. He told Al-Monitor that many literature students, who head to the branches of the Dar El-Shorouk publishing house to buy classics, often return empty-handed as the books are not available.

Youssef al-Kaeed, another Egyptian novelist and currently a member of parliament, believes that it is not the publishing houses but the changing reading habits of the new generation that causes the fall in the sales of classic novels.

Most readers in Egypt are young and prefer to read Ahmed Mourad, Ahmed Khaled Tawfik and other novelists who focus on writing youth stories, he told Al-Monitor. "Each generation has its own best-selling novelists. In the 1960s and 1970s, the young generation preferred to buy and read the novels of Mahfouz and Sibai, thus causing the distribution of older, more classic books like those of Taha Hussein, Zaki Naguib Mahmoud and Mahmoud Taymour to drop."

Mohammad al-Chahat, a professor of literary criticism at the University of Cairo, told Al-Monitor, “Although many people can read and write, the market of modern and classic novels has witnessed a decline,” putting this down to the increased time young people spend in front of a screen. “After the January 25 Revolution, the attention of the youth shifted back to the importance of reading and its value in spreading awareness and social and political culture. Perhaps the distribution of printed classics dropped because they were available online."

For Mohammad Khedr, the director of distribution at Dar El-Shorouk, cinema and TV may serve to rekindle interest in the classics. He told Al-Monitor that the distribution of Mahfouz's novel “Afrah al-Qobba” ("Wedding Song") soared after a TV series based on the book was produced and broadcast in 2016. Khedr noted that those accusing Dar El-Shorouk of slackening in promoting Mahfouz’s work and that of other classics novelists overlook the fact that the publishing house contributed to producing several successful series based on novels, mainly “Afrah al-Qobba.”

Amira Abu al-Majd, the director of publications at Dar El-Shorouk, agreed that the January 25 Revolution contributed to increasing readership in Egypt in general and specifically in classical literature. She told Al-Monitor, “The declining rates of distribution were common during the political recession when young people were not interested in culture. Publishing houses cannot control this aspect, and they suffer losses."

She added, "Currently the publishing houses are benefitting from young people’s interest in reading, and the proof is that the people working in cinema and TV production are realizing the value of classics. Some productions such as 'Afrah al-Qobba' were created by young drama producers.”