Egyptian screenwriters are revisiting the practice of turning novels into films and TV series — and perhaps reviving an interest in literature in the process. 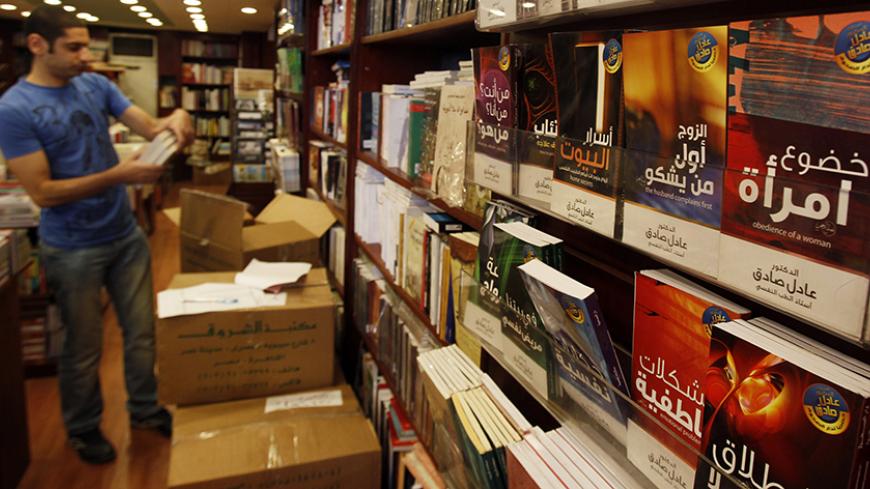 A man browses in a bookshop in downtown Cairo, Oct. 13, 2010. - REUTERS/Amr Abdallah Dalsh

In the 1950s, '60s and '70s, the literary works of leading Egyptian authors brought glory to the big screen when their novels were made into films. This year, the Egyptian novel took to the small screen when Nobel Prize-winning author Naguib Mahfouz’s "Afrah al-Qubbah" ("Wedding Song") was made into a TV series broadcast during Ramadan.

Similar literary works are expected to be broadcast on TV in the next few years, as Egyptian production company El Adl Group announced Sept. 13 that it has finished the main set for the TV series "Wahat al-Ghurub" ("The Sunset Oasis"), which is based on Bahaa Tahir’s novel of the same name. The series is to be filmed at the Siwa Oasis by the end of October or the beginning of November, to be broadcast during Ramadan in 2017.

Writers and producers recently revived the idea of turning widely read and best-selling novels into screenplays. This phenomenon was evidently embraced when scriptwriter Wahid Hamid turned Alaa al-Aswani’s best-selling "The Yacoubian Building" into a 2006 film directed by a young Marwan Hamid. The story is about an old apartment building in downtown Cairo occupied by Egyptians representing different economic, social and cultural castes. The film and the novel alike depict the suffering and transformation of every social caste in Egypt since the movement of July 23, 1952, until 2005, a period which included the overthrow of the monarchy and political parties and the military taking the reins of power.

Since "The Yacoubian Building," the idea of turning novels into screenplays has become more common. For instance, "The Blue Elephant," "Hepta: The Last Lecture" and "The Price" are films adapted from novels written respectively by novelists Ahmad Murad, Muhammad Sadiq and Amal Afifi. However, critic Mahmoud Abd al-Shakur told Al-Monitor that "Wedding Song" marks a turning point in “the relationship between the novel and the screenplay.”

Mustafa al-Faramawi, the manager of Dar El Shorouk bookstores, told Al-Monitor, “The series’ excellent script and exceptional production, and the distinguished performance of its crew, have placed the novel on the bestseller list and this [speaks to] the importance of cinema and TV in bringing the audience back to reading.” (It is worth mentioning that Dar El Shorouk owns the copyright and distribution rights of Mahfouz’s novels in Egypt.)

Faramawi said, “Turning a novel into a film usually increases sales of the latter at screening time, as was the case with 'The Blue Elephant' or 'Hepta.' Moreover, the films’ posters are sometimes used as covers for the novels’ next editions, as a sort of advertisement. Unlike 'Wedding Song,' most of these novels were attracting youth in the first place and achieved considerable sales before they were made into films. However, sales of Naguib Mahfouz’s novels have been decreasing for years and 'Wedding Song' is one of his rich intellectual and political literary works, due to its symbolism. Therefore, being placed again on the bestseller list is proof of the novel’s greatness and success, let alone the deep influence of the series, as well as audiences’ ability to value such exceptional literary work.”

"Wedding Song" relates the story of the murder of a young actress, Tahiyya Abdo. The novel narrates her murder from the different perspectives of people she knew through working in the theater, which is owned and managed by Sarhan al-Hilali. Hilali decides to make his group perform a play portraying Abdo's murder, to uncover any corruption among the theater's staff, including Hilali himself. Every character in the drama symbolizes a certain social, political or economic stratum. Critic Muhammad Abd al-Shakur indicates that the novel exposes all aspects of corruption that led to the defeat of Egypt in the 1967 war against Israel, and tackles the roots of that corruption from the 1952 movement until after Egypt’s victory in the 1973 war.

Abd al-Shakur said, “'Wedding Song' has all the elements of success. The rich literary work has been turned into an attractive series with the assistance of a large number of popular drama stars, despite the simple roles that some of them perform. In addition, the mystery that cast its shadow over all the series’ episodes is another element of success, as everyone was eagerly waiting to know the circumstances of [Abdo's] murder and her relationship with her colleagues.”

When asked about his expectations for the upcoming series, he said, "'The Sunset Oasis' is a rich, philosophical novel that needs special scriptwriting skills to be made into a drama that attracts and holds the audience so they can understand the meanings and purposes of the novel."

He added, "This, certainly, is a considerable challenge for the work team."

The novel, published by Dar El Shorouk, is set in the 19th century at the beginning of Britain's occupation of Egypt. Police officer Mahmoud Abd al-Zahir is transferred to Siwa Oasis when Egyptian authorities suspect him of sympathizing with the revolutionary anti-colonization stance of Jamal al-Din al-Afghani and Ahmad ‘Urabi. Abd al-Zahir’s Irish wife — who is fond of archaeology and was in pursuit of Alexander the Great's tomb — accompanies him to the oasis. The novel is based on Abd al-Zahir’s inner struggle, as he is caught between either accepting the new circumstances — his transfer, the British defeat of ‘Urabi, the oasis people and his wife's attitude — or rejecting the whole situation.

“The distribution of 'The Sunset Oasis' was considerably good. The novel won the International Prize for Arabic Fiction (Booker), yet it is not as popular as 'The Blue Elephant' or 'Hepta.' Therefore, the series staff is facing a big challenge similar to the challenge of 'Wedding Song.' I hope they will succeed in their experience so that there will be a mutual benefit between the novels on one side and the cinema and drama on the other," Faramawi said.

He added, "Some works benefit from the popularity and distribution of certain novels such as 'The Blue Elephant' and 'Hepta,' and some novels benefit from drama and cinema for simplifying the literary works and portraying them in an appealing and attractive way despite their rich content, as is the case with 'Wedding Song.' Therefore, I hope the same methodology will be adopted with 'The Sunset Oasis.'"