During the current row with the United States, Turkish leaders have rediscovered their love for the European Union, particularly Germany, but the illegal activities of the Osmanen Germania Biker Club in Germany and its ties to the Ankara government could complicate efforts to improve relations. 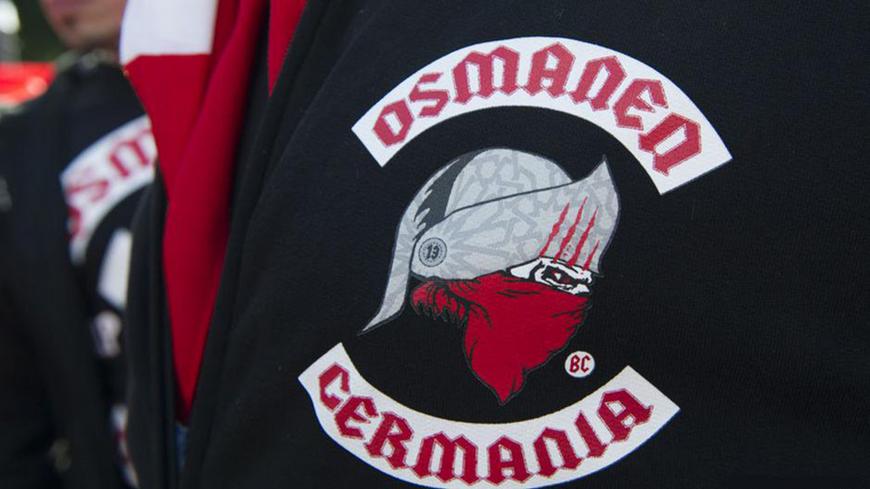 Mainstream, pro-government Turkish media have recently discovered the existence of a strong alliance between Germany and Turkey, loudly proclaiming that Germany stands with Turkey against the “economic coup” by the United States. They failed, however, to mention that German Chancellor Angela Merkel has also advocated measures to ensure the independence of the Central Bank in Turkey.

It was only a year ago, in August 2017, during the campaign leading up to German nation elections, that Turkish President Recep Tayyip Erdogan feverishly called on the 1.2 million eligible voters of Turkish descent living in Germany to vote against the enemies of Islam and Turkey, by which he meant Merkel and her party. Fast forward one year, and the Turkish media, guided by the palace, is trumpeting bragging rights for an official Erdogan visit to Germany scheduled for Sept. 28-29.

Turkish-German relations are important for Ankara at a time when Erdogan is looking for allies against the Donald Trump-led United States. In addition, Germany is home to the largest Turkish population outside Turkey, and it ranks as Turkey’s number one trading partner. Yet, several thorny issues require attention before Erdogan's September visit.

One of them involves the July 10 announcement by German Interior Minister Horst Seehofer banning the Osmanen Germania Biker Club (OGBC), calling the group a “grave threat to public safety.” A statement on the ministry's website read, “Once again, the federal government and the federal states have shown that they are resolutely fighting all manifestations of organized crime in Germany, including rocker-like groups such as OGBC, whose members commit serious crimes. Those who reject the rule of law cannot expect any kind of leniency from us.”

The charges leveled against the club were backed up by phone records between OGBC members and close Erdogan associates, including Metin Kulunk, a former lawmaker for the Justice and Development Party (AKP) who keeps popping up as a liaison between Erdogan and the OGBC.

During the early stages of an Al-Monitor investigation into the OGBC begun July 10, a prominent journalist covering international criminal organizations told Al-Monitor, “OGBC is known to torture prospective members for days if they break the rules.”

Those courageous enough to meet with Al-Monitor in Germany and in Turkey about the group included scholars, family members of prospective and current OGBC members among others. Although willing to speak out, their names are being withheld, as they all fear for their lives.

A scholar conducting research on immigrant groups in Germany explained to Al-Monitor, “The gang, OGBC has been active since 2014. They have a membership estimated between 300 and 3,500, and they are like the biker gangs, all inspired and designed on the model of the California-based Hells Angels. They have at least 22 chapters all around the EU.”

The scholar also said that the OGBC had been formed as a boxing club, because they don’t bike. That said, however, the founder is the only known boxer among its members. They are all required to work out regularly. Indeed, the recruitment videos posted on YouTube include men with Hells Angels-like leather jackets displaying symbols of brotherhood.

“They do not speak much Turkish,” one person who knows some members revealed to Al-Monitor. “They are German-born yet marginalized, because they failed to get a decent education or a legitimate trade to earn a living. In order to make money, they needed to resort to other ways and means.”

Like other such gangs, the OGBC is known to be involved in prostitution and sexual slavery, extortion, drugs and blackmail. There is also the matter of attempted murder. The group's official video boldly proclaims, “We are coming to take over the entire country.”

The club claims the Ottomans are coming, and they also assert that it was established to promote social welfare, by working with youths, providing them with a setting for boxing, lifting weights and so on. Along the way, it apparently became involved in criminal activity. There are a number of rocker, biker or boxer groups in Germany, so why did the government single out the OGBC?

A senior bureaucrat in Ankara told Al-Monitor, “We strongly believe Kulunk messed up. He was reckless and did not understand what it means to get tangled up with armed non-state entities in a European state. This is not Africa, or Syria or Iraq. No proper state would allow international espionage on its territory. They would catch and punish drug dealers, and other sorts of crimes, but they would not ban a group as a whole. OGBC was banned due to their links to Turkey.”

Indeed, on June 1, 2016, Kulunk called Erdogan directly on his phone from Germany to inform him about efforts to work with the OGBC to organize protests against a bill to recognize the Armenian genocide. The taped conversations of Kulunk reporting directly to Erdogan have cast a cloud over the Turkish National Intelligence Organization, the AKP’s European lobby and Erdogan.

In December 2017, Kulunk, after learning that his phone conversations had been recorded, didn't deny them, but instead charged, “No one has security in communication or travel in Germany.” He was particularly peeved that the German government would, in his eyes, make life easy for the Kurdistan Workers Party, Greeks, Armenians and Gulenists, but erect hurdles for Turks, with various investigations and regulations. After Germany banned the OGBC, Kulunk changed his tune, saying he could not believe the German government would take fake news seriously and act on it.

Kulunk is not the only name linking the OGBC to the Turkish government. Indeed, photos have emerged of Erdogan senior adviser Ilnur Cevik hosting group members and happily posing with them in an OGBC T-shirt. The group proudly posted the photo on its social media site and asserted in broken Turkish that Cevik stands with them as they battle terrorist groups. Among Kurds, liberal Turks and alleged Gulenists in Europe, the OGBC is known as “Erdogan's pit bulls.”

German authorities characterize the group as Turkish nationalists with suspected ties to the Turkish government. One source told Al-Monitor, “There is no way they would have become so strong in two to three years without a solid source of funding to acquire arms. The turf wars among different gangs are rather intense. The OGBC grew exponentially, and they were going beyond just petty criminal activity. Their links to the Turkish government must involve funding, money laundering and expansion of legal protection.”

Some members' relatives allege that the group is rewarded by Turkey with whatever they want in return for intimidating Ankara's opponents in Europe. One of them said, “The group was particularly active for the April 16 referendum [in 2017 to switch Turkey to a presidential governing system]. They organized several neighborhoods all around Europe. They have Schengen passports, which means they can travel at ease and under the radar. They also intimidated those who were not going to vote yes from going to the ballot box at the consulates and embassies.”

The club has chapters in other European countries, along with serious allegations against them. In January 2017, Danish authorities uncovered a plot to assassinate Gulenists.

One scholar remarked to Al-Monitor, “Whether or not Kulunk and Celik still hold official positions or have been tossed aside does not matter. They have been long-time associates of Erdogan, and he is still in power. How long can Erdogan wash his hands of all these affiliations?”

For now, Erdogan is hoping to form an anti-Trump alliance with anyone willing, including in the EU. Is anti-Trump sentiment strong enough for Erdogan, Merkel and others to join forces on the basis of the enemy of my enemy is my friend?