How clipping Turkey's religious reach has boosted Erdogan in Europe 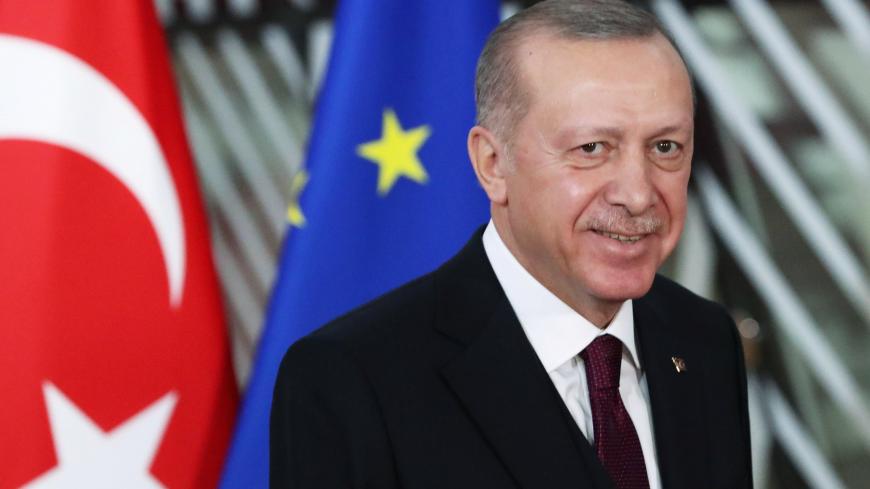 In late April, the German state of Hessen announced it will end its eight-year cooperation with the Turkish-Islamic Union for Religious Affairs (DITIB) for religion classes at schools. The official reason for ending the partnership is that the DITIB is not seen as independent from the Turkish state.

The DITIB is a branch of the Turkish Religious Affairs Directorate, or Diyanet. It has offices all around the world, including the United States, with hundreds of mosques and thousands of imams and teachers. But its stronghold is Europe due to the large Turkish diaspora the continent hosts. At least 5.5 million Turkish citizens reside in Western Europe.

Kemal Bozay, a professor of social and political sciences in Dusseldorf, explained to Al-Monitor, “After the 1990s, Islamic education entered the schools. In states where there was a sizable Turkish population, the DITIB has been active in designing curricula for such classes and partnering with educational agencies. The most important criticism against the DITIB is not about its religious practices but its identity as a representative of the Turkish state and religious policies.” Bozay added that although Hessen is the first to end such cooperation, it may easily set a precedent for other states.

Indeed, Hessen is only one of many European states that have taken steps to manage DITIB and Muslim Brotherhood activities. In June 2018, Austria announced the closure of seven mosques and expelled imams who were paid by Turkey. France decided in February to stop allowing the foreign funding of imams, mosques and teachers for religion classes. Germany has started training its own imams.

The director of the program on extremism at George Washington University, Lorenzo Vidino, elaborated further on how the DITIB has changed over the years. “In substance, the German authorities see it as de facto the same as organizations that the security services monitor, namely Milli Gorus [National View, a political association that President Recep Tayyip Erdogan belongs to] and the MB (and, unsurprisingly, the DITIB has gone from opposing those two groups to working closely with them),” he wrote in an email.

This transformation is exemplified in how the DITIB approached issues in 2004 vs 2017. In 2004, the DITIB organized Germany’s first Muslim anti-terror march, while in 2017 the same organization refused to join a popular Muslim march against terrorism.

Erdogan’s outreach to Western Europe has been multipronged, from organized crime by biker gangs to alleged espionage and using refugees as leverage. Once the vote share of the diaspora became a significant factor in Turkey's elections, Erdogan’s party intensified its efforts to expand its base in Europe.

Turkey's DITIB has edged closer to the Brotherhood as Europe's appreciation for moderate Islam has faded. The line between Brotherhood and Salafist movements has almost disappeared.

A Turkish-German scholar activist whose connections with LGBTQ community have risked his life several times spoke to Al-Monitor on condition of anonymity. He said, “Not all but most the DITIB officials encourage anti-Semitism, hatred against gays, ridicule Christian values and spy on their neighbors who don’t observe Islamic practices or are critical of Erdogan. The DITIB itself announced in 2018 it would start anew but it didn’t work, and will not as long as they are taking direct orders from Ankara. Even if their Turkish funding is stopped, their allegiance won't.”

The scholar referred to the recent #YallahHollandaya or “Go to Holland” insult for LGBTQI populations that has trended in Turkey.

Are these decisions effective in shortening Erdogan’s long arm in Europe? Vidino explained, “The pattern has been this: German authorities express their concerns about the DITIB and/or take decisions to stop their partnership with it; the Erdogan government lashes out with very virulent rhetoric, including very sensitive accusations (for a German audience) of Nazism and fascism; it creates discomfort among German authorities and public, although not much backtracking. The assessment in Germany is this: The DITIB and the various Turkish government-related entities are a) Islamist in nature and working closely with other entities that are problematic and monitored such as MB and National View, and b) spreading a worldview among German Muslims that is highly problematic, as it counters integration at best and at worst favors radicalization.”

Vidino said what to do about it is a difficult question. “Tolerate (giving them space and ignoring a dangerous dynamic)? Cut ties and undermine (at the cost of nasty retaliations from Ankara, if not just in playing the Islamophobia card)? Not easy.”

Al-Monitor inquired with senior bureaucrats about how these kinds of decisions from Europe were taken in Ankara. One said, “We just learned that two DITIB mosques were attacked [May 9] in Cologne, Germany. Is this the new normal? They fail to control discrimination, violence and injustice toward immigrants of all sorts, first generation or third generation. Is the barrier to integration the DITIB or is it the marginalization due to systemic discrimination?"

Officials in Ankara argue that if the DITIB is not allowed to be part of the education system, the families will find other ways for their children to learn Islam. “Islam cannot be Germanized or Europeanized,” one official told Al-Monitor on condition of anonymity. The oft-repeated view among Ankara’s policy elite is that the diaspora's love for Erdogan is organic, and providing state-funded Muslim-only services marginalize the diaspora further. These restrictions will strengthen their affection toward Erdogan. German-trained imams will find it difficult to sustain a crowd if they fail to respect Islam’s real values, those that Erdogan represents.

The issue is complex. Saudi Arabia and the UAE’s relentless war on the Muslim Brotherhood is effective in Europe — with Riyadh and Abu Dhabi competing with Ankara and Doha to reach a wider European Islamic audience — but has compelled further cooperation between Qatar and Turkey. In recent years, Qatar expanded its funding of the Brotherhood in Europe. Together, they reach out to refugees and a wider net of Muslims.

A Turkish scholar studying refugees from a university in Istanbul told Al-Monitor, “Since the New Zealand mosque shooting, Ankara has been rigorously working on white supremacist networks. Their goal is to expose them abroad and prevent their infiltration and possible attacks inside Turkey. This in turn will increase Erdogan’s popularity among Muslims, especially those who live in non-Muslim worlds.”