Because of accusations of espionage, Turkey had to recall religious attaches and official imams from several European countries. 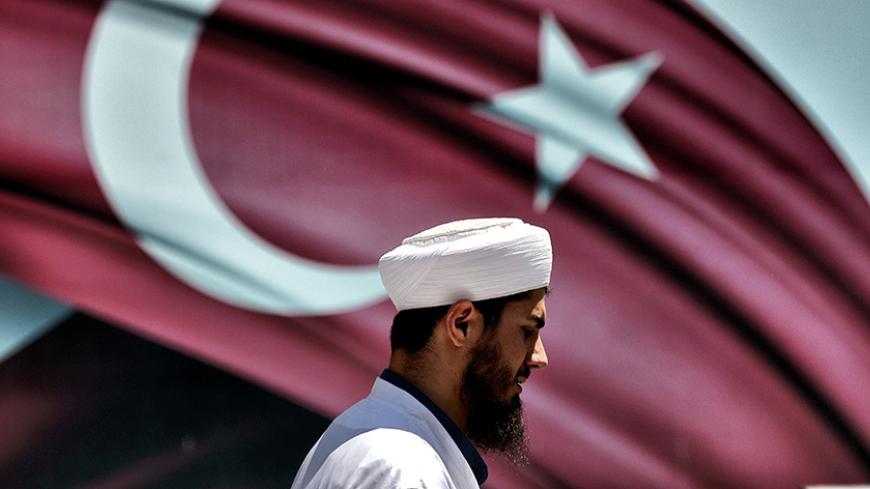 An imam passes the Turkish flag during a demonstration in support of Turkey's President Recep Tayyip Erdogan at Sarachane Park in Istanbul, July 19, 2016. - ARIS MESSINIS/AFP/Getty Images

Under the ruling Justice and Development Party (AKP), budget allotment for the Religious Affairs Department (Diyanet) — Turkey's official religious body — has increased every year. In 2017, the Diyanet had more money than 11 ministries.

According to Diyanet statistics, today there are 86,760 mosques in Turkey, all under its jurisdiction. With the number of its personnel reaching 117,000, the Diyanet, which is endowed with ample financial resources and has educational and publishing bodies, is like a state within a state.

During the coup attempt of July 15, 2016, on instructions from the Diyanet, state-employed imams (prayer leaders) called upon the people to come out to the streets and resist the coup plotters. Now, the Diyanet is on the agenda with something completely different: spying imams.

The issue of spying imams led to diplomatic tensions first between Turkey and the Netherlands, and then with Germany and Austria. The crisis escalated when the German police searched the residences of four Turkish imams on Feb. 15.

In a report submitted to the Parliamentary Inquiry Commission investigating the coup attempt, there were references to intelligence information provided by imams posted abroad. Diyanet-appointed imams collected intelligence from 38 countries, primarily about the Gulen movement.

Reports submitted by the spying imams covered all Gulenist activities, the names of their adherents and their photos in European, Central Asian and African countries. After the Diyanet reports to the parliamentary inquiry were leaked to the media in December 2016, the first reaction came from the Netherlands. Diyanet reports revealed that official Turkish religious personnel were collecting intelligence about Turkish expatriates praying in 145 mosques in that country. Yusuf Acar, the religious affairs attache of the Turkish Embassy in The Hague, was accused of guiding local imams. The Turkish government was asked to recall Acar, and it did.

But then the crisis extended into Germany, which has the largest Turkish community in Europe. The Turkish-Islamic Union for Religious Affairs (DITIB), a nongovernmental organization set up in 1984, became the focal point of espionage allegations. Allegations emerged in the German media and parliament that imams assigned to more than 900 mosques were sending intelligence reports to Ankara.

Volker Beck, a deputy for Germany's Green Party, filed a complaint with the federal prosecutor that DITIB imams were engaged in espionage. An investigation was launched on Jan. 18 under the provisions of Article 99 of the German penal code that covers "spying for a foreign country." DITIB and more than 900 imams linked to it were investigated. Some German states suspended their cooperation with DITIB on religious education in schools. German Justice Minister Heiko Maas said if it is verified that DITIB, which is subject to German legislation on civil society, was engaged in intelligence activity, then it would be established that this organization was actually an extension of the Turkish state.

German Interior Minister Thomas de Maiziere said they will not tolerate the spillover into Germany of the domestic strife between the Turkish government and the Gulen movement. According to German laws, as a civil society organization, the DITIB must remain independent, though the Diyanet is allowed to assign its imams to DITIB-associated mosques as part of its assistance program to meet the religious needs of the Turkish expatriates.

On Dec. 19, DITIB Secretary-General Bekir Alboga acknowledged that "some imams had exceeded their authority and were engaged in collecting information." He apologized, saying his organization was against such practices.

With the expansion of the investigations by German security services and prosecutors following the raids on residences, the arrest and deportation of Diyanet imams became likely. German Chancellor Angela Merkel asked for these imams to be recalled during her visit to Ankara Feb. 2. Immediately after her visit, six imams were recalled to Turkey.

Diyanet Director Mehmet Gormez said some imams may have exceeded their duties but he would not accept that they were involved in espionage. Gormez said they had recalled the six imams not to damage the 40-year friendship between Germany and Turkey. He said the Diyanet and the DITIB were above politics and the state never interfered in the operations of the DITIB.

Meanwhile, Turkey's Minister of Justice Bekir Bozdag argued that the search of the imams' residences violated German law and could not be reconciled with human rights and freedom of faith.

It appears that Diyanet imams gave the most fervent support to President Recep Tayyip Erdogan's call on Turkish ambassadors to struggle against the Gulen movement in the countries they work.

Media organs close to the government said the spying imam crisis was a ploy of Western countries to support and protect the Gulen movement.

Never mind that the Diyanet director said that they don't mix religion with politics. It seems the Diyanet and its imams are already lined up behind Erdogan and the AKP.