Russia plans to lift visa requirements for some Turks and to begin delivery of the S-400 missile-defense system to Turkey next year in an attempt to further sway Ankara away from the United States. 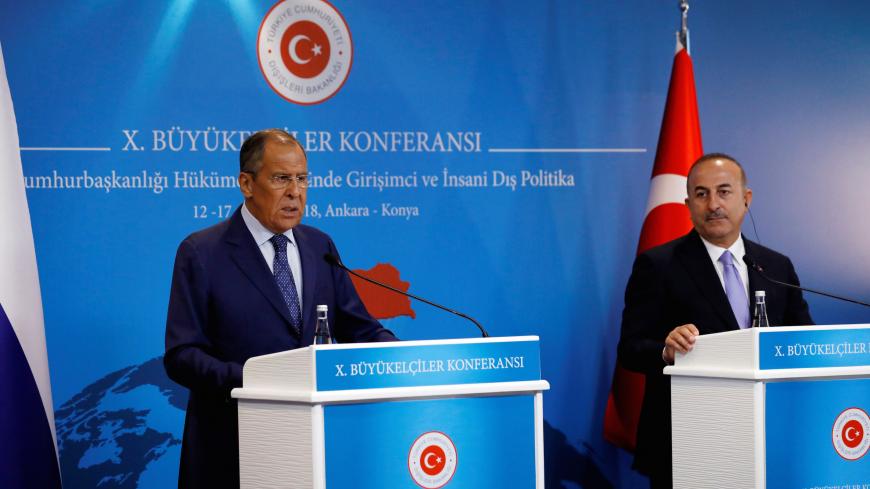 On Aug. 14, Russian Foreign Minister Sergey Lavrov visited Turkey. At a joint press conference with his Turkish counterpart Mevlut Cavusoglu in Ankara, Lavrov said the United States is abandoning diplomacy in favor of “sanctions and blackmail.”

“Sanctions, threats, blackmail, and diktat are being used. In these conditions, it even feels that some of our Western partners have lost the culture of diplomacy,” Lavrov said. His words were warmly welcomed in Turkey.

Since the collapse of Soviet Union, Russia has promoted the idea of a multipolar world without the dominance of any single power state. The idea is well-received by many countries, including Turkey, which has been backing UN Security Council reform for many years. At the moment, Turkey and Russia are facing similar economic problems, as both are suffering from US sanctions. Moreover, the so-called “anti-Americanism” among ordinary people and state-controlled media seems to be at its highest level both in Russia and Turkey.

“We are at a turning point, without exaggeration, in world history, from dominance by a single power toward a multipolar environment and we talked about this a lot,” Lavrov said. Turkey’s foreign minister, in turn, reminded his colleague that Turkey has never supported sanctions against Russia and has no intention to support sanctions against Iran.

Both ministers also discussed the visa regime abolishment for some categories of Turkish citizens. “We reached agreements with Russia to abolish visas for businessmen and holders of official passports,” Cavusoglu said.

The Turkish foreign minister will arrive in Moscow on Aug. 24 to discuss these matters as well as the situation in Idlib. Beginning in 2010, Turkish citizens had become able to go to Russia without visas for a term of up to 30 days. However, on Jan. 1, 2016, after Turkey shot down a Russian jet in Syria, Moscow suspended operation of a visa-free regime. Russians, however, have still been able to stay in Turkey up to 60 days without visas.

On Aug. 18, a Russian delegation headed by State Duma Speaker Vyacheslav Volodin took part in the sixth general congress of the Justice and Development Party, where Erdogan was re-elected as party leader.

“Russia, Turkey and Iran have joined efforts on combating terrorism and helped the Syrian government to fight against the terrorist state,” Volodin said during a meeting with Turkish parliament Speaker Binali Yildirim.

Yildirim replied, “Yes, I agree. In these difficult times, we need to strengthen our solidarity.”

Volodin also met with Erdogan; however, there were no official statements following the meeting.

Russia’s state-run new agency Sputnik commented on the event: “It is obvious that showing any kind of solidarity with Russia on Syria is not going to please anyone in Washington, so it can be argued that the Turkish leadership is more predisposed to defiance than to surrender.”

While Ankara and Moscow are closely cooperating in finding a peaceful solution to the Syrian crisis, they are also both developing mega energy projects — the construction of the Akkuyu Nuclear Power Plant in Turkey and the Turkish Stream natural gas pipeline project. Turkey also has agreed to a deal to purchase Russia’s S-400 missile-defense system. Recently, Turkey’s Daily Sabah reported that Moscow would begin implementing the deal with deliveries to Turkey in 2019.

“The contract is being implemented on the dates previously agreed. In 2019, we will begin to implement the contract,” the head of Rosoboronexport, Alexandr Mikheyev, said.

Rosoboronexport, the only state organization in Russia for exporting the entire range of military, dual-use products and services and technologies, also said it would switch to using local currencies in deals with foreign trade partners, instead of using the US dollar.

Earlier, on Aug. 14, Lavrov had said that Moscow had for some time been considering settling trade matters with Turkey, Iran and China in national currencies rather than the dollar.

“The use of national currencies in mutual trade has been one of the tasks undertaken by the presidents of Russia and Turkey for several years already. In our relations with Iran, the same processes have taken place, and not only with Turkey and Iran, but also with the People’s Republic of China we agreed and we have already realized payments and settlements in national currencies.”

However, Kerim Has, a Turkish professor at Moscow State University who specializes in Turkish and Russian politics, said in an interview that trading in national currencies will not be a reality in the near future because it is such a complicated issue.

“It has also been discussed for more than a year between the two countries, but on the other hand this balance in trade relations is quite important, in this case. For example, Turkey exports approximately $25 billion to Russia while Russian exports to Turkey exceed $18 billion, so Russia would have a Turkish lira surplus in its trade with Turkey if the national currencies are taken into account.”

Also, despite the closer economic ties and mutual interests in Syria, the current Moscow-Ankara rapprochement is viewed with some skepticism by Russian experts.

“Russia should watch the US-Turkey conflict closely, but w/o illusions. Trump will probably win this time, given Turkey’s econ vulnerabilities. Erdogan won’t leave NATO. However, Trump’s ham-fisted approach to allies will have major consequences in reshaping world order,” Dmitri Trenin, director of the Carnegie Moscow Center, wrote on Twitter.

Semyon Bagdasarov, a Russian Middle East expert, believes that Erdogan will not exchange NATO for any pro-Russian military alliance.

“Turkey will not leave NATO. However, Erdogan’s Turkey remains a problematic member of the bloc,” Bagdasarov said.

Yevgeny Satanovsky of the Institute of the Middle East, a Moscow-based think-tank, said one must be extremely cautious in describing current relations with Turkey. “These relations are changing very quickly, and coming up with long-term forecasts about the rapprochement between Moscow and Ankara is a thankless task,” he said.