Israel recently allowed Palestinian security forces to deploy in Hebron's old town in a show of control and cooperation, but it has not committed to any ongoing coordination for future patrols. 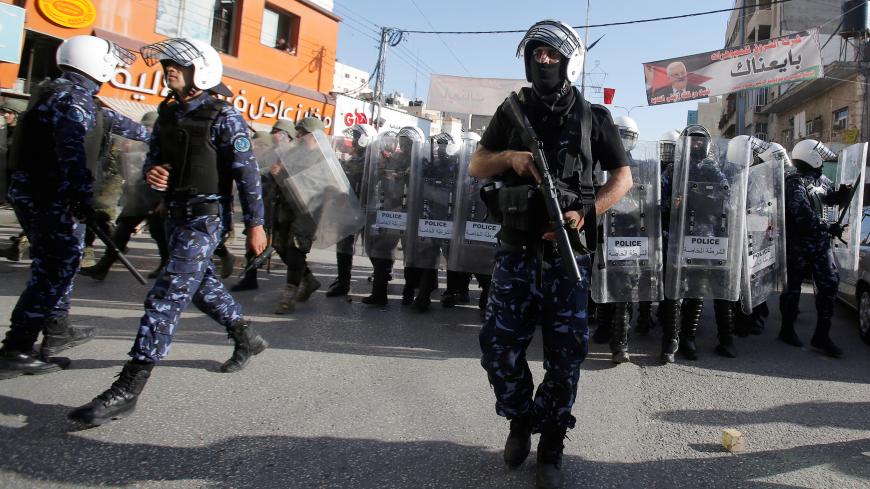 RAMALLAH, West Bank — Palestinians in the old town of Hebron were recently surprised to see armed and uniformed officers of the Palestinian security forces patrolling the town for the first time since 1997.

The city in the southern West Bank is divided into two parts under the Hebron Protocol signed in 1997 between Israel and the PLO. Area H1 covers 80% of the city and is under Palestinian control. Area H2 includes the old town, the Ibrahimi Mosque and some neighborhoods and is under both Israeli security control and Palestinian civilian control.

The pact followed bilateral agreements between Israel and the Palestinian Authority (PA) for the redeployment of Israeli military forces in Hebron based on the Oslo Accord.

Col. Ahmed Abu al-Rab, the director general of the Palestinian police in Hebron, told Al-Monitor the security delegation entered the old town on July 31 “in coordination with the Israeli authorities to reach out to the residents and show them that Palestinian security, although not [permanently] deployed in the area, is there to protect and assist them. This also conveys a message to lawbreakers that security forces can get to them no matter where they try to hide.”

Abu Rab added, “The old town of Hebron and the areas under Israeli security control have turned into a hideout for lawbreakers, drug traffickers and fugitives, as they believe Palestinian security won't be able to reach them there.”

Although the Palestinian security services won't be able to stay in the area permanently or carry out security operations without coordinating with the Israeli side, they have devised a plan to help residents.

“We formed a security committee with locals and we have officers already residing in these areas. We keep in touch with residents to solve outstanding problems such as arresting outlaws and drug traffickers,” Abu Rab said. "This committee and these officers will coordinate with the Hebron governorate, which has 150 inspectors working around the clock in the area.”

Abu Rab explained that the Palestinian security services has a list of wanted individuals accused of intimidating residents and promoting drugs who will be pursued in cooperation with locals.

Israel agreed to this patrol following a request submitted by the Palestinian Liaison Office in Hebron and not in response to a specific security incident, according to Abu Rab. He added that Palestinians have been submitting such requests for years, and now the patrol can respond to residents' complaints.

Hebron Gov. Kamel Hamid told Al-Monitor, “The Palestinian side has never stopped demanding that Israel allow the Palestinian security services to deploy officers in these areas to impose security through liaison offices and direct Palestinian-Israeli coordination or through international parties such as European ambassadors and consuls, and even through the Red Cross and the Temporary International Presence in Hebron. Yet Israel refused.”

Hamid explained, “The Palestinian side insisted that security officers patrol the old town wearing their uniforms and carrying their weapons to show lawbreakers that we are able to get to them and that we are ready to deploy our officers in the area whenever we get the chance and Israel allows it. We will be present, be it permanently or temporarily, in official military uniforms or civilian wear.” Today, thanks to the efforts of the Palestinian Liaison Office, the Israeli authorities have finally agreed, he said.

The day after the patrol, when Palestinian Prime Minister Rami Hamdallah inaugurated the new ophthalmology and pediatrics departments at Mohammed Ali al-Muhtasib Hospital in the old town, he allowed his bodyguards and armed Palestinian security forces to spread out and secure the area.

More than 40,000 Palestinians live in Area H2 alongside about 800 Jewish settlers. The Hebron municipality provides services to the Palestinians.

“The PA and its institutions are responsible for providing services to locals. Israel does not offer a single thing. Instead, it imposes strict measures on a daily basis, such as erecting military checkpoints, raiding homes and arresting locals, in an attempt to force them out of the area,” Hamid added.

The absence of Palestinian security in the old town has contributed to its economic deterioration, he said, explaining, “Commerce is completely halted. Back in the day, the old town was an economic hub for the entire West Bank, with hundreds of shops to serve pilgrims visiting the Ibrahimi Mosque.”

Tariq al-Tamimi, the president of the Hebron Chamber of Commerce, said citizens and shop owners were pleased to see the Palestinian security forces came through. He told Al-Monitor he hopes it will reassure shop owners to reopen their businesses.

He explained that the Israeli army had ordered 512 shops to close in the name of protecting settlers, particularly since the second intifada, which broke out in 2000. More than 1,300 shops followed suit due to the lack of business and security, as thieves and drug traffickers increasingly threatened shops.

Tamimi said the Palestinian security services promised shop owners that this visit was just the first of many, and that they should expect a larger presence in the future through continuous coordination with Israel. But these promises need the approval of Israeli authorities, who have yet to comment on the possibility of allowing more patrols, even for a few hours.

As the PA attempts to address the security issue in the old town, businesses are trying to revive commerce and tourism. Tamimi said that within a couple of months, the Chamber of Commerce will open a large consumer institution in the old town to sell goods to shops at wholesale prices. “We want to strengthen the resilience of shop owners and encourage those who closed their businesses to reopen them, as well as urge residents to hit the shops again,” he added.

Abu Rab noted that the Hebron Rehabilitation Committee, whose mission is to preserve Hebron's cultural heritage while reviving the area, is collaborating with the Ministry of Tourism and the Palestinian police to reopen the old town tourist route that passes through lanes and alleys to reach the Ibrahimi Mosque.

He added that police patrols and private security already mind the entrances of Hebron to guide tourist buses coming from inside the Green Line to visit the old town.

Still, the PA’s efforts to strengthen security and provide services will depend on Israel as long as it controls the area.