Traffic policewomen, a first for Bethlehem

Women participated for the first time in organizing traffic in Bethlehem, as part of a police program aimed at promoting women’s role in the force. 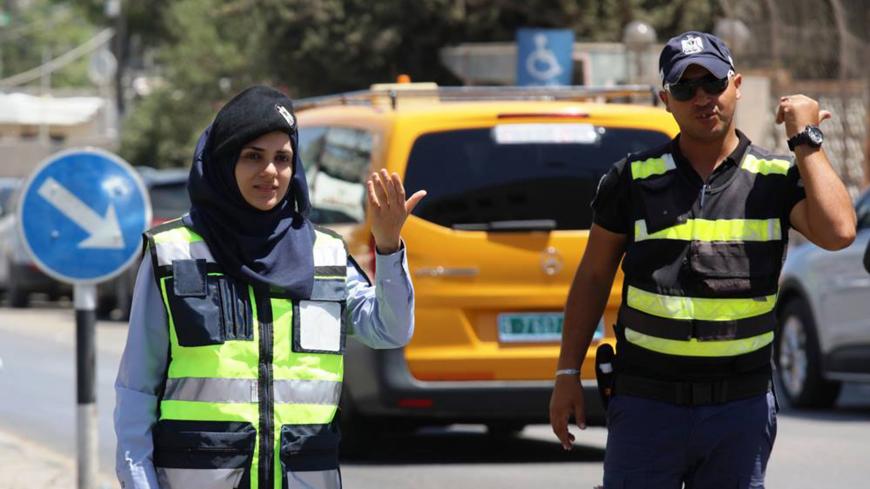 GAZA CITY, Gaza Strip — Female police officers participated Aug. 5 for the first time in organizing traffic in the streets of Bethlehem in the southern West Bank alongside their male peers, to facilitate citizens’ movement.

This move comes as part of a program the West Bank police had launched earlier this year to promote women’s participation in the traffic police force and help ease the workload of traffic policemen. Women’s participation in managing traffic on the streets of Bethlehem confirms Palestinian women’s ability to work and confront male social perspective undermining them and prohibiting them from taking positions that men monopolize.

Maaram Abu Obeid, 22, a policewoman who joined the traffic police in Bethlehem, told Al-Monitor, “I graduated from the Faculty of Police Sciences and Law at Al-Istiqlal University in April, and I immediately started working at the police directorate in the governorate. I was later chosen to be part of the women’s traffic police force.”

Abu Obeid noted that, during her university studies, she took part in several trainings that increased her skills and gave her sufficient knowledge in police work, including traffic control. She added that being in the field was challenging at first, especially as it involves direct contact with the public, unlike her traditional police work that involved just working from the office.

Since Palestinian society is not used to women in the traffic police force, she receives on occasion negative reactions, especially from male drivers. But Abu Obeid pays no attention and continues her work.

However, Abu Obeid also receives positive feedback from many citizens who praise her work, especially female drivers. She noted that the presence of policewomen in the traffic police force — so far eight only — has become crucial amid the increasing number of female drivers in the governorate.

Regarding the nature of the job, she said, “I stand at the junction with my colleague and we organize traffic, issue fines and mind the traffic lights. This has boosted my self-confidence.”

Abu Obeid said that her parents supported and encouraged her, and she hopes other women would deploy in all Palestinian governorates and participate in other kinds of police work. She noted that women should no longer be deprived of certain positions based on their gender.

Ayman Abdel Qader, a lieutenant in the traffic directorate in Bethlehem, told Al-Monitor that the participation of policewomen in organizing traffic in Bethlehem was part of a new initiative the directorate launched to deploy women in the field to support the traffic police.

He said that the eight policewomen were deployed on the main busy junctions in Bethlehem and that their number would increase in the near future to position them at all junctions.

Policewomen are chosen based on certain standards such as their age, height and health. New graduates were picked because they also took part in training sessions prepared by the police academy, including personal skills, weapons training and specialized lectures in traffic control.

Abdel Qader said that this step is long overdue in the Palestinian territories, as most countries already employ women in the traffic police force. He noted, “Citizens are generally comfortable with the female presence in the police force, but still there are critics. Each field has advocates and opponents. The law has guaranteed the right to work based on competence, not gender.”

Abdel Qader noted, “Policewomen are currently working alongside traffic policemen, and they take turns in organizing the traffic and benefit from their experience.”

Spokesman for the Palestinian police Louay Zreikat told Al-Monitor that Bethlehem was chosen as the first city to employ women as traffic police officers to show Palestinian women’s role in contributing to regulating traffic in a tourist city. In addition, Bethlehem has a traffic police shortage and it is in seventh place among the governorates with the highest accident rate.

Zreikat noted that the policewomen received intensive training in traffic control, traffic light management and writing fines, adding that they are still receiving training on how to deal with citizens on the streets.

He added that women make up around 3% of the police force, but that up until now they have been based in the office. He said policewomen will enter the traffic poilce force in all governorates in the near future.