The Egyptian Ministry of Youth and Sports, the Interior Ministry and Giza governorate are collaborating to recruit young women to help direct traffic. 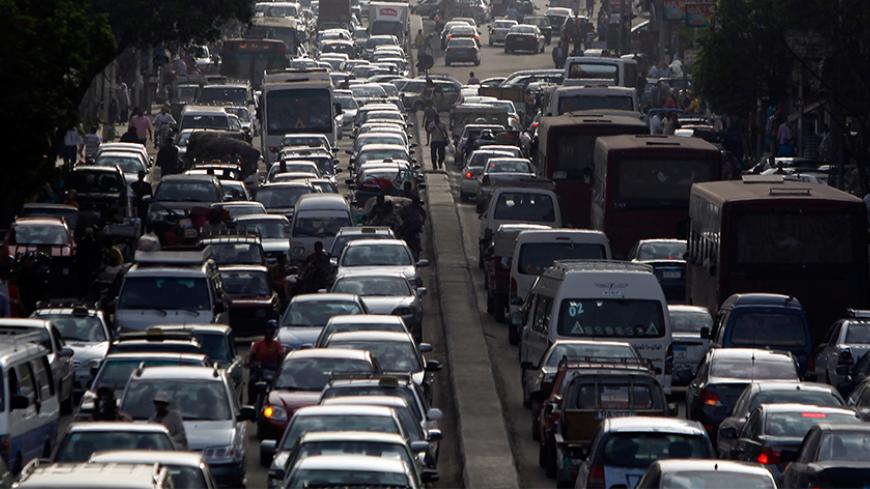 CAIRO — A new phenomenon is catching the attention of passersby in the streets of Giza: young women directing traffic.

In an experiment that began in early September, the Ministry of Youth and Sports, in collaboration with the Interior Ministry and Giza governorate, are turning to women ages 18-25 to direct traffic. If the program succeeds, authorities will consider implementing the same experiment in all Egyptian governorates, according to statements by Giza Gov. Khaled Zakaria al-Adly.

Fifteen young Egyptian women are taking part in the experiment to help traffic police at a number of traffic lights in Giza, in coordination with the General Directorate of Traffic. The women are dispatched at Giza Square, al-Nahda Square, Mostafa Mahmoud Square, Kit Kat Square, Orman Garden, at the intersection of Lebanon and Shehab streets, and in front of the Giza governorate council.

Traffic problems are significant and dangerous in Egypt. A 2012 World Health Organization report estimates some 8,000 people die in Egypt every year in car accidents, many of which result from traffic violations.

This prompted the Interior Ministry to seek help from women. The experiment is testing whether female traffic-control workers can handle the profession that for years has only been reserved for men. While they direct traffic, the women often are subjected to verbal harassment from passers-by and drivers.

Every day, Asma Ramadan, 20, stands at the Kit Kat Square traffic light, donning the gray uniform, amid the exhaust fumes and honking cars. She works from 9 a.m. to 2 p.m. Ramadan told Al-Monitor that she quit her job at a pharmacy and joined the traffic police assistance team. She said that although she receives a nominal salary of 20 Egyptian pounds ($2.55) per day, she is happy standing in the street in defiance of the prevailing attitude that directing traffic is a job only for men.

Ramadan enrolled in the program after seeing an ad that the Youth and Sports Directorate in Giza was recruiting females to direct traffic. She completed the required three-month training course on traffic rules and signs at the General Administration of Traffic, and she now receives on-site instruction.

She said that the experience is new for her and that the job requires concentration and agility. She resents the way some passers-by look at her and jeer. “Men and women harass us. A woman once told me after I helped her cross the street, 'Are there not enough men? This job does not do girls any good.'” However, Ramadan told Al-Monitor that the job is changing the way young women are perceived, and that it bridges the gap between citizens and the traffic police.

She believes there is no such thing as a job just for men, and she praised the committed performance of women in directing traffic. Being a traffic officer, she said, has turned her into a more serious and rigorous person, as she represents the Interior Ministry and the Giza governorate when she stands at traffic lights.

In her first month, she issued five tickets to drivers who ran red lights and verbally harassed her. She said she dislikes issuing tickets, and her goal is to help people abide by the traffic rules for their personal safety.

Nora Ibrahim told Al-Monitor that she not only directs traffic but also helps the elderly and people with special needs. She said that working as a traffic officer is hard, but it has helped her prove herself. And while some people harass her, others are encouraging her.

Ali Aboul Fotouh, deputy head of the Youth and Sports Directorate in Giza and one of the officials in charge of the experiment, told Al-Monitor the project is being implemented in phases. The first phase started in early September and will continue until the end of October. The second phase will start during the summer of 2016 and will run for five months in a more organized and expanded way. The number of participants will increase to 100, as opposed to the 15 women currently working, and the training period will be longer.

The women must meet height requirements and must have achieved above-average grades in secondary school. They must also know how to deal with the public. Aboul Fotouh stressed that the women who are part of the first phase have shown eligibility, endurance and enthusiasm and that some of them work for 10 hours, from 9 a.m. to 7 p.m.

Mona Ezzat, who directs the Women and Work program at the New Woman Foundation, said the women’s work in directing traffic is a very positive phenomenon and helps break gender stereotypes, so that women can be seen as qualified individuals who have the right to choose the job they want.

"The presence of girls in the public sector reduces the risk of harassment, because society will get used to the idea that women are present in the various industries, which I believe would reduce the rates of violence [against women],” she told Al-Monitor.

Ezzat added, “Morocco is also an Arab country with female traffic officers riding motorcycles, and they are not subjected to harassment because society has accepted them.” She expects the same to happen in Egypt with time.