The 2017 Women's Leadership Incubator project will empower a team of civil society organizations in the Gaza Strip to strengthen their staff’s sensitivity and response to the needs and rights of marginalized women. 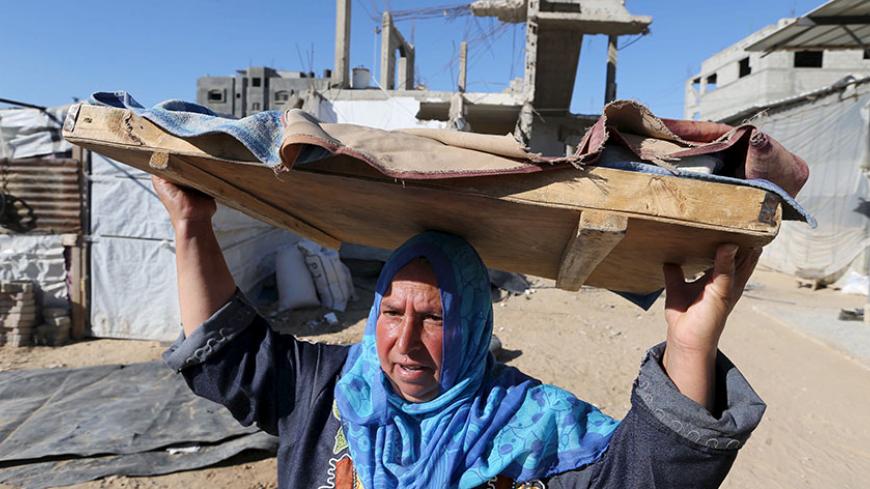 A Palestinian woman carries bread to be baked, near the wreckage of her house that witnesses said was destroyed by Israeli shelling during a 50-day war last summer, in Khan Yunis in the southern Gaza Strip, June 22, 2015. - REUTERS/Ibraheem Abu Mustafa 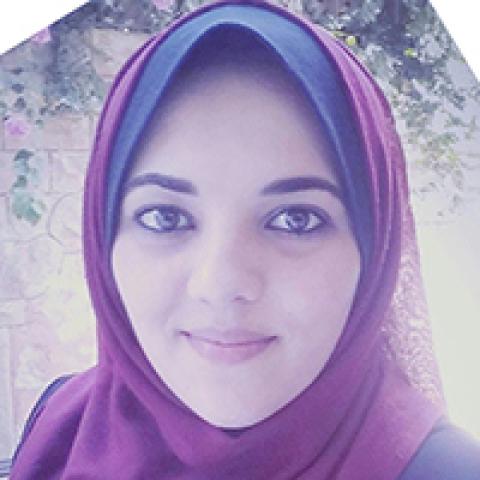 GAZA CITY, Gaza Strip — The ongoing Israeli siege imposed on the Gaza Strip enters its 11th year with Palestinians suffering the ensuing crises that have affected all aspects of life in the enclave. Because women are a vulnerable group in society, a pressing need has emerged to support Gazan women by empowering them to obtain their rights, promote their status and improve their financial situation.

Civil society organizations supporting marginalized groups in Gaza in general follow the policies of their financiers and the needs they identify, often disregarding the requirements of implemented projects or the needs of the targeted groups. However, the 2017 Women's Leadership Incubator (WLI) project is the first to allow women's support organizations in Gaza to identify their needs as an organization as well as the needs of the community they target.

The 2017 WLI project implemented by the Euro-Mediterranean Human Rights Monitor funds, trains and supports the staff of organizations that were chosen to participate in the project, to strengthen their staff’s sensitivity to marginalized women’s needs and rights, and implement projects to support them.

The difficult economic situation of women in the Gaza Strip was the main motivation behind the launch of the project. A March 7 press release by the Palestinian Central Bureau of Statistics stated, “The female participation rate in the labor force was 19.3% of the total female population of working age [15 years or older] in 2016 … while the male participation rate was 71.6% in 2016."

Six organizations from different areas in Gaza have been selected to join the project; staff members have received a number of initial training sessions and participated in workshops on gender-related and project management issues.

The projects of the six organizations funded by the WLI will be implemented over a five-month period starting in early August and running through January. Projects will mostly help the participating Gazan women to join the labor market and empower them economically by providing them with the required skills.

The first project aims to teach 30 Gazan female graduates the skills to obtain freelance online work and train them on the related mechanisms. The second project, implemented in the southern Gaza Strip, aims to train deaf women and girls on using social media, online marketing and content production. The third one targets young female graduates to train them on how to manage and market e-commerce projects.

The fourth project is related to community initiatives that seek to introduce change within the scope of a systematic approach to serve the population of the central Gaza Strip, amid the scarcity of community development and voluntary initiatives. The fifth project promotes the idea of using art and theater to discuss and highlight the difficult reality of marginalized women and girls in the city of Rafah in southern Gaza, through short comedy scenes and artistic performances. The final project aims to create a media dictionary that contains the terms required in the speeches and campaigns of the women's organizations.

Aya al-Zinati, the WLI’s public relations and communication coordinator, told Al-Monitor, “The challenges that the project aims to address are the status of marginalized women in Gaza and the ability of civil society organizations to meet these women’s rightful needs and address their concerns.”

She noted that the WLI female advisers specialized in gender equality and human rights will be providing continuous follow-up throughout the period of implementation of the projects, and will make sure during each meeting to highlight the Gazan women’s rights and teach the participants how to demand their rights.

She said, “By targeting these organizations, the WLI project aims to support and empower women in various fields. The project also aims to tackle women's exclusion from decision-making processes, leaving them constantly dependent on the support of men rather than becoming self-reliant and autonomous.”

Zinati added, “The project will be executed on two levels. The first is encouraging civil society organizations to engage female employees in decision-making processes. The second is encouraging them to push targeted women to participate in debates about the challenges they face and to decide on programs to address these challenges, including design, planning and implementation.”

She said that “the involvement of civil society organizations and women would make the implemented programs more efficient for targeted women and would allow such organizations, women and society in general to give women their rights and enable them to claim these rights — thereby improving the status of women.”

The WLI project directly targets female staff at civil society organizations and women in marginalized areas, while it indirectly focuses on other groups targeted by the selected organizations, such as women's families and society as a whole.

“The project relied in the selection of the participating organizations on two main criteria: The applying organizations should have already managed women-related projects and should include a female member of staff,” Zinati said.

Azza Kassem, the WLI gender expert and consultant for women affairs, told Al-Monitor, “We noticed during training sessions and field visits that the concept of gender equality is still unclear to some human rights workers in particular, and to those working in fields related to a societal change in general. This concept is generally understood as limited to women only.”

She argued that there is an urgent need to understand the tools of social change and to reshape the qualifications and skills of the participating civil society organizations' staff and decision-makers through an in-depth understanding of the Palestinian situation and the prevailing culture in society.

She stressed the need to work hard to transform the human rights culture into a social culture, inculcate the concepts of women's rights and gender equality in society, and adopt gender equality approaches in the programs, policies and objectives of women's organizations.

Kassem pointed out that the superficial understanding of the gender equality concept among most of the workers in the field of women’s rights and the prevalence of the male-dominant culture among political parties, as tools for social change, explain the low percentage of women in decision-making positions.

Wedad Sourani, the director of the Society of Women Graduates in the Gaza Strip, one of the six organizations participating in the WLI, told Al-Monitor, “Our participation in the WLI aims to empower female graduates to take a more efficient role in the Palestinian society by building their capacities.”

She said, “The funding that our proposed project will receive from the WLI will allow us to achieve our objectives, including to empower Gazan women economically and improve their living conditions. We are working with 30 female graduates, and we aim to provide them with the skills required to find work — whether through freelance online platforms or in the local labor markets.”

Sourani described her organization's participation in the WLI as a preliminary step toward reducing unemployment among female university graduates in Gaza, explaining that the project they proposed to the WLI not only aims to help women advance economically but also gives them an opportunity to play an important and efficient role in the Palestinian society.

May Abu Zayed, the vice chairman of the board of directors of the Women and Child Development Association — a civil society organization that provides care for women with special needs, orphans and widows, and combats child labor and violence against women — told Al-Monitor, “The financing by WLI of our proposed project will enable us to raise the awareness of 20 women who can't hear and speak about their legal rights through the efforts of an integrated female staff.”

She added, “Our project also aims to socially integrate 17 other women by familiarizing them with the use of social media, breaking societal alienation and improving their psychological well-being and interactivity. The WLI will allow us to build the capacities of the academic staff working within our civil society organizations.”