Although women have made increasing progress in entering Egypt’s police force, they still face many obstacles. 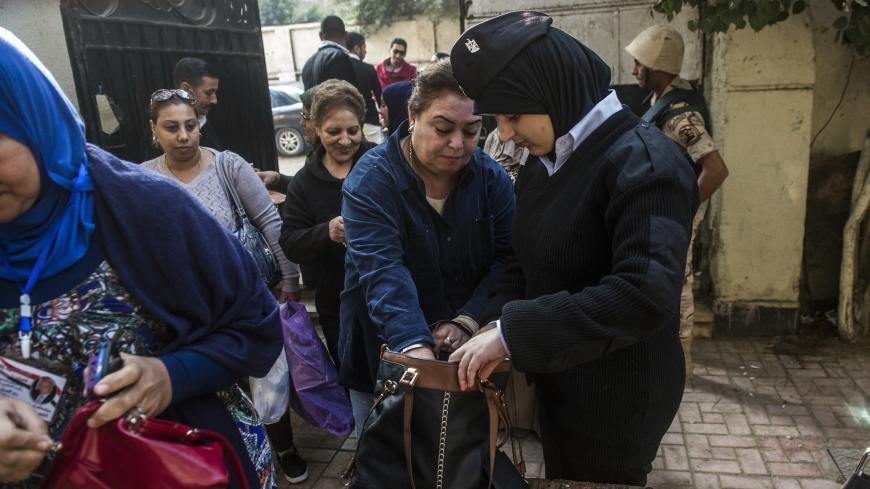 An Egyptian policewoman checks women's handbags outside a polling station in the capital, Cairo, on Nov. 22, 2015, on the first day of the second and final round of the country's parliamentary elections. - GETTY/Khaled Desouki

CAIRO — From June 15-17, Egypt’s Ministry of Interior deployed the largest number of female police cadres it had ever dispatched on Egyptian streets as well as around cinemas and parks in a bid to provide security for the Eid al-Fitr holiday celebrations. The task of these female police members was to ward off harassment of and violence against women, which are common during holidays and public events.

The beefed up and organized presence of trained female police officers drew the attention of several local and regional Arabic- and English-language newspapers — some even went so far as to praise the role of women at the Ministry of Interior.

Young women were first allowed to join the Egyptian Police College in 1984. Not many joined in the beginning, as many Egyptians believed that police work was not suitable for women. After female participation remained low for four consecutive years, the college stopped accepting young women in 1990.

However, the Faculty of Specialized Officers at the Police College opened its doors to female university graduates to join the Interior Ministry upon completion of four years of study in required disciplines such as medicine, public relations, social services and languages. This would allow women to work as specialized officers in the fields of medicine and public relations and as supervisors at prisons, penal institutions and airports.

Although non-specialized young women have not been admitted to the Police College since 1990, the Ministry of Interior began to increasingly deploy female officers around churches and schools in 2014.

Schools were used as polling stations in both the 2014 and 2017 presidential elections and the House of Representatives' 2015 elections. Women also worked on securing public parks and cinemas, where crimes of harassment tend to be common. Also, in 2014, the Ministry of Interior established a special department for female police tasked with supervising the training offered to female officers who showed interest and had the necessary skills in the fields of self-defense, security and combating violence against women.

Alaa Abdul Majeed, a former general and former police science professor at the Police College, told Al-Monitor, “The presence of female police members within the Ministry of Interior has significantly contributed to the achievement of great successes. The presence of women has become indispensable to ward off crimes of harassment. There are many figures and statistics that prove this. For instance, there has been a decline in harassment crimes during the holidays of Eid al-Fitr, Eid Al-Adha and Sham al-Nassim since 2014. What’s more, an Egyptian female police officer was martyred while on duty during the attack on the Alexandria Church in April 2017.”

He added, “Women’s work in the police is still partly frowned upon. Some people believe that security and police work is the preserve of men and that women’s participation in such fields is dangerous. However, the unfortunate terrorist events that have been taking place in Egypt since 2013 … made everyone feel that no one is safe and that there is no difference between men and women. This led more Egyptian families and young women to join the police, and I think the successes achieved by women police will serve as a source of motivation for more young women to join.”

Hamdi al-Batran, a retired general and a member of the Honest Officers Coalition, told Al-Monitor that he was satisfied with women’s experience in the police in Egypt, and while he hoped the experience would last, he did not seem optimistic.

“The predominance of male officers in power centers at the Ministry of Interior and the deliberate marginalization of women contribute to the rampant corruption in the ministry, so I do not expect women’s roles to expand. Female officers will only be securing celebrations and combating violence against women, which will decrease motivation in women and lead them to refrain from joining the police,” he said. He said many veteran leaders reject women’s empowerment and believe that females aren't efficient when it comes to this work.

Batran said that if the power centers predominated by men at the Ministry of Interior allow women to grow in their positions, then some women cadres could become security directors or assistants to the minister of interior, and this “would cause controversy at the ministry.”

While he pointed out that women’s status has improved under pressure from President Abdel Fattah al-Sisi, he ruled out that the Ministry of Interior would start relying on women as a general policy.

Hoda Badran, the head of the Egyptian Feminist Union, largely concurred, telling Al-Monitor, “Following the success of women's police in securing celebrations, churches and combating violence against women, it would only be natural for the Ministry of Interior to increase its reliance on women and allow them to carry out greater tasks, even if such an expansion included a limited number of female police cadres at first.”

She noted that failing to do so at a time when women are proving successful at the Ministry of Interior will only lead to decrease motivation in other young women.

Al-Monitor contacted a 19-year-old Egyptian woman, M. Khaled, through the Facebook group "Police Academy and Military College for Women" — an unofficial page that advises females who want to join the academy or the college. Khaled said, "I wanted to join the Police Academy or the Military College. It was my life dream, but I faced many obstacles after finishing secondary school — starting with my family who rejected my choice, considering it a risky field. The obstacles continued with an unpleasant surprise that both the academy and the college accept only men with secondary certificates. They accept only females who have graduated from certain colleges determined by the Ministry of Interior."

Ahlam Hanafi, a member of the National Council for Women, told Al-Monitor that increasing the reliance on women in all fields — be it inside or outside the Ministry of Interior — has become an official trend that all officials are aware of. This trend cannot be hindered by male officers who are in control of power centers within and outside the Ministry of Interior. This has been evidenced by the increase in the number of female ministers in the new Cabinet to eight, the number of female bank managers and the increasing number of female deputies at the Central Bank, among others.

This, she added, would prove that Egypt is a state of institutions that adopts a unified policy in empowering women regardless of the people in power.