For years, the Arab world and Israeli politicians have ignored the pain and rights of Jews expelled from Arab countries out of neglect or worry that it would muddy the debate on Palestinian refugees. 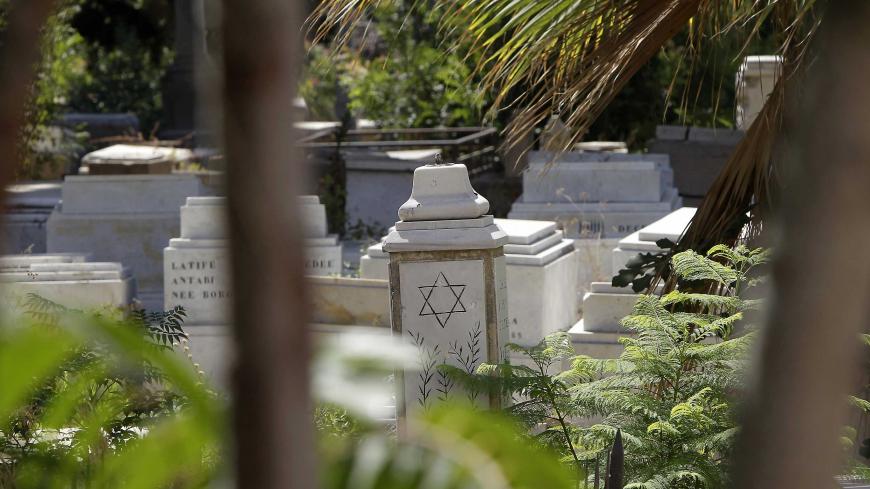 A tombstone bearing the Star of David is pictured at the abandoned Jewish cemetery in the Sodeco district of Beirut, Lebanon, Aug. 24, 2010. - JOSEPH EID/AFP/Getty Images

In January, the Trump administration informed the UN Relief and Works Agency (UNRWA) that it was cutting tens of millions of dollars in aid to the organization. Recently, the administration declared that UNRWA’s mandate must be changed.

The campaign launched by the Trump administration against the UNRWA has directed the spotlight once again at the issue of the Palestinian refugees who fled their homes or were expelled from them in Israel’s 1948 War of Independence, a tragedy they dubbed “Nakba,” Arabic for “catastrophe.” In emails he sent in January that were reported by Foreign Policy magazine, President Donald Trump’s son-in-law and senior adviser Jared Kushner suggested that the Arab states take in the Palestinian refugees and ensure their rehabilitation. Someone should remind Kushner that the Arab states did not expel the Palestinians and turn them into refugees, nor did they confiscate their property. On the other hand, Iraq, Iran, Egypt, Yemen, Syria, Lebanon, North Africa and the Gulf states did expel the Jews living there, confiscate their property and turn them into refugees.

What Trump calls the “ultimate deal” that presumes to find a regional solution to the Arab-Israeli conflict must also offer a practical resolution of the Palestinian refugee problem and at the same time seek to rectify the injustice to the Jews who were expelled from their homes in Arab countries and Iran or fled from them. The riots against Jews and the anti-Semitic incidents that followed the UN’s 1947 Partition Resolution and the declaration of Israel’s independence turned 865,000 Jews into refugees. In 1957, the UN High Commissioner for Refugees recognized them as refugees in accordance with the UN Convention on Refugees. Ambassador Zvi Gabbay, who died July 29, wrote in 2012 that while the UN has adopted dozens of resolutions in support of the Palestinian refugees, established the UNRWA to aid them and allocated huge budgets for its operation, the organization did nothing for the Jewish refugees. “This one-sided approach,” the Iraq-born diplomat said, “has not solved the problem and has exacerbated the Israeli-Palestinian conflict.”

In September 2012, Israel’s Foreign Ministry launched the “I am a refugee” campaign to promote international awareness of the issue of Jewish refugees from Arab states. A Facebook page highlighted the stories of Israelis who had fled Arab states or had been expelled from them. “For the sake of true reconciliation with our Palestinian neighbors,” wrote then-Deputy Foreign Minister Danny Ayalon of the Yisrael Beitenu party, “the issue of Jewish refugees must be resolved.” He took pride in the “storm” generated in the Arab world through the campaign he was spearheading.

Four years ago, the Knesset designated Nov. 30 as an annual commemoration of the Jews’ expulsion from the Arab world. The law tasks the minister of education with ensuring the issue is taught in schools and the foreign minister with raising international awareness of the existence of refugees from Arab states and Iran and their right to compensation for the personal and communal property confiscated by the countries where they lived. Nov. 30 was chosen as the closest date to the UN Partition Resolution of Nov. 29, 1947, that created the State of Israel and forced many Jewish communities in Arab countries and Iran to uproot virtually overnight for fear of the pressure their neighbors had begun to exert on them.

In 2014, at the first commemoration ceremony of the tragedy, President Reuven Rivlin remarked that over the years, the Israeli establishment had treated immigrants from the Arab world with arrogance and paternalism, blurring their footsteps on the pages of the country’s history. “Supposedly, they, immigrants from Arab countries, did not march proudly along the path of ‘the pillar of fire and smoke’ of our people’s annals,” Rivlin added, referring to the fact that Israel was for years controlled largely by Jews of European origin. Rivlin called to right the historic wrong perpetrated against these immigrants.

At the time, Secretary of State John Kerry suggested that a special section in his road map for Israeli-Palestinian peace refer to compensation for Jews from Arab lands. Special envoy Martin Indyk also spoke to Jewish leaders about the importance of recognizing the rights of those Jews who had been ignored for decades by the international community and Israeli society.

But Foreign Minister Tzipi Livni, who represented the government of Benjamin Netanyahu in negotiations with the Palestinians, gave Kerry’s proposal the cold shoulder. Israel’s peace camp views inclusion of the Jewish refugee issue in negotiations with the Palestinians as a right-wing ploy designed to forge a troubling link with resolution of the Palestinian refugee problem and thereby sink the peace process. Thus, for fear of undermining prospects of an agreement with the Palestinians, the Israeli left has ignored the pain and rights of Jews from the Arab world who, together with their descendants, constitute about one-half of Israel’s Jewish population, which means over 3 million people. Although the right wing has been in power longer than the left, this attitude has led to the left being solely blamed for “establishment” arrogance toward Israelis displaced from Arab lands.

A scathing special report issued in 2014 by the State Comptroller showed successive right-wing governments did not go out of their way, either, for these Israelis. Despite the “festive declarations” by Israeli governments about their commitment to act on behalf of these groups, the findings show “an unsatisfactory level of commitment by the government to carry out its decisions and very little work” to ensure that proper attention was given to the issue, according to the report.

The Palestinian refugees displaced by the creation of Israel are not responsible for the injustice perpetrated by Arab states against their Jewish communities. Nonetheless, promoting a solution to the Palestinian refugee issue is an excellent opportunity, if not a crucial condition, for realizing the rights of the Jewish refugees. The “Israeli Regional Initiative,” an organization dedicated to advancing regional peace based on the 2002 Arab Peace Initiative, has included compensation of Jews from Arab states in its blueprint. This section appears separately, deliberately so, from the chapter relating to a two-state Israeli-Palestinian solution, alongside other regional issues such as security, economic cooperation, environmental protection and more.

Arab states are highly unlikely to pick up the gauntlet thrown down by Trump, who has called for them to take in the Palestinian refugees, thereby freeing Israel and the international community from responsibility for them. Just as one cannot wave away the issue of Jerusalem from the Israeli-Palestinian negotiating table (on a final-status solution), Trump’s declaration to the contrary notwithstanding, shutting down the UNRWA will not wipe out the Palestinian refugee camps in Gaza, the West Bank and elsewhere. Either way, presenting the refugee issue in the context of a regional arrangement provides the Israeli left with an opportunity to wave the flag of regional peace with one hand and stretch out the other to Israelis whose mother tongue was Arabic, to recognize their narrative and to identify with them as equals. This may be the way to extricate them from the tentacles of the nationalist right and with them the entire state.