Should Jewish refugees from Arab countries be compensated?

An Israeli-government project estimates that Jews who fled Arab countries and immigrated to Israel left behind $150 billion in property, and the prime minister has been authorized by law to seek compensation for it in any peace deal. 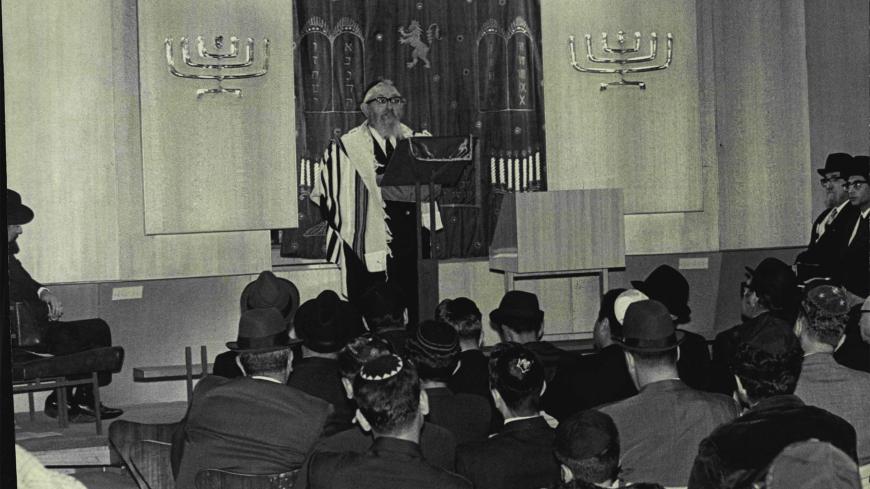 Geula Mualem lives in Jerusalem, but was born in northern Iraq. She was 12 years old during Israel’s War of Independence in 1948, when her extended family decided to leave the village where she was born and make the journey to the new Jewish state being established in the Land of Israel.

In a conversation with Al-Monitor, Geula explained that the motive behind the decision was, first and foremost, Zionism. In other words, her family wanted to immigrate to the Promised Land. At the same time, however, the environment in which they lived was becoming increasingly hostile to Jews as were the authorities. As Jews in Iraq suffered from repeated acts of violence and looting, the police did nothing to protect them, making their lives difficult.

As Geula tells it, one day the family patriarch left the keys to their home with a Muslim neighbor and asked him to continue to tend the family’s vineyards and orchards, where they grew grapes, peaches, and other fruits. The family then set off for Baghdad. Before leaving the country, they were forced to hand over all their remaining possessions, including cash and jewelry.

Geula remembers hearing people say, “Bring a bucket and demand that all the women of the family put their jewelry in it. If any of them takes their time about it, rip the earrings from their ears and the rings from their fingers.” She further remarked, “Then they put us in a room, ordered us to undress, and checked to make sure that we didn’t hide any money or jewelry in our clothes. We arrived in Israel with just the clothing on our backs. That’s all.”

Guela's story is illustrative of how many Jews immigrated to Israel from Arab lands, leaving all their property and possessions behind. In February 2010, the Knesset approved the Law for Preservation of the Rights to Compensation of Jewish Refugees from Arab Countries and Iran. Article 3 states, “Within the framework of negotiations to achieve peace in the Middle East, the government will include the issue of compensation for the lost property of Jewish refugees from Arab lands and Iran, including property owned by the Jewish communities of those lands.” The prime minister was made responsible for advancing the provisions of the law.

The legislation had two purposes: to ensure that Jews from Arab lands and Iran were compensated for the property they left behind and to counter demands by Palestinian refugees who left their homes in 1948 and 1967 to receive compensation for property that they left behind. Accordingly, in a conversation with Jewish leaders in the United States in January 2014, Martin Indyk, US envoy to peace talks between the Israelis and Palestinians, said that in addition to compensation for Palestinian refugees, any framework agreement would also include the right to compensation for Jews who left their homes in Arab lands.

There are no negotiations with the Palestinians at the moment, but Israel has been planning for some time for the possibility of a renewal of talks. Over the last two years, Social Equality Minister Gila Gamliel has been working with the National Security Council to put together an official estimate of the value of abandoned Jewish property in the Arab states. The conservative figure reported Dec. 16 is an estimated $150 billion. The amount is unadjusted and based on the value of the property in the 1950s. Researchers involved in calculating the losses based it on immigrant testimonies, studies of the Jewish communities and up-to-date classified information from Arab states.

“When I started dealing with this important issue, I was stunned to discover that there has been no dramatic progress on the issue for years,’’ Gamliel told Al-Monitor. “The current investigation is very important for the past, but also for the present, and especially for right now, particularly with diplomatic proposals such as President Donald Trump’s ‘deal of the century’ [potentially] on the table with all its implications.”

According to a study by the Museum of the Diaspora (Beit HaTefutzot), more than 700,000 Jews from Arab states and Iran migrated to Israel over the years, including some 400,000 from North Africa. The remainder arrived from Iraq, Yemen, and other countries.

Professor Esther Meir-Glitzenstein of the University of Beersheba told Al-Monitor that an Iraqi law passed in 1948 depriving Jews of most of their civil rights was intended to encourage them to leave. A group of several thousand Jews, mostly from wealthy families, immigrated to Great Britain after transferring at least part of their property there via banks. Most Jews, however, went to Israel and were not allowed to bring anything with them except for clothing and personal items. This was the case in other Arab countries as well.

Professor Yehuda Shenhav of the Department of Sociology and Anthropology at Tel Aviv University is not a proponent of the Israeli law on compensation or the comparison with Palestinian refugees. He argues that designating these Jews as refugees conflicts with the Zionist vision, which holds that Zionism motivated Jews to settle in Israel. “This is a problematic argument,” Shenhav said. “While there were Jews who fled the Arab states, like the Jews who fled Egypt in 1956, many other Jews came [to Israel] of their own volition.”

In contrast, Yael Ben Yefet, CEO of the Mizrahi Democratic Rainbow Coalition, which advocates for the economic rights of Jews from Arab lands, argues that even if Jews left Arab lands of their own volition, they were forced to leave their property behind in their countries of origin.

“This is recognition of the suffering and refugee status of Jews who left Arab states and the harsh treatment they faced in their countries of origin from the authorities and the local population,” Ben Yefet told Al-Monitor. “For years, the voices of Jews from Arab states have not been heard clearly. Apart from recognizing the suffering they endured, this also has economic implications. Financial compensation could improve their situation and amend various processes of discrimination and deprivation that lasted for years.”

The recent estimate and detailed findings on Jewish property losses have been presented to Gamliel and the National Security Council for assessment. Gamliel is expected to present Prime Minister Benjamin Netanyahu with the report in the next few weeks.

“This is nothing less than the beginning of a historical injustice being corrected,” said Gamliel. “Through it, the hundreds of thousands of Jewish refugees who lost their property will be able to receive what is owed them and see themselves restored to their rightful place in the historical narrative of the young state that had just come into being when they were refugees.”