A UN conference addresses the status of Jews from Arab states who were expelled from their homeland after the creation of the state of Israel. 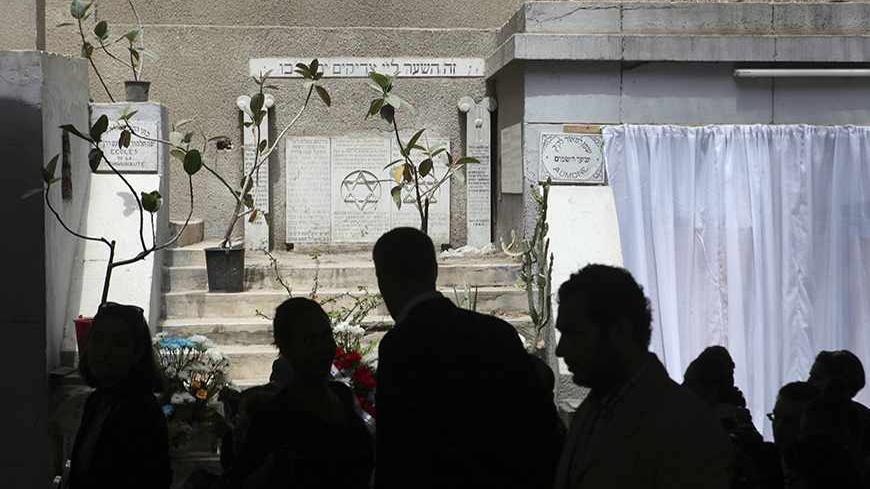 Diplomats from the United States and Israel are silhouetted at a ceremony, held in memory of Egyptian Jewish leader Carmen Weinstein, at Shaar Hashamayim (Gate of Heaven) synagogue in Cairo, April 18, 2013. - REUTERS/Asmaa Waguih

The second annual gathering of Jewish refugees from Arab countries was held on Thursday, Nov. 21,  in a conference room at UN headquarters in New York. The event was organized by the Israeli delegation to the UN, headed by Ambassador Ron Prosor, the World Jewish Congress and the World Organization of Jews from Arab Countries (WOJAC). The organization was established in 1975 in Paris by former Knesset member and minister Mordechai Ben-Porat and the late millionaire Leon Taman, who served as chairman of the Sephardi Federation of UK and was one of the leaders of Arab Jewry.

The mission of WOJAC was, and is, to “raise world consciousness to the story of some one million Jews from Arab and Muslim states, who were forced to flee persecution, imprisonment and pogroms.” The organization, with its slogan “The Forgotten Million,” seeks to obtain recognition of the existence of Jewish refugees from Arab countries and compensation for the property they left behind.

For all UN member states the combination of the words “Israel” and “refugees” is likely to immediately conjure up the issue of Palestinian refugees, one of the biggest stumbling blocks to resolution of the Israeli-Palestinian conflict. But this time they were invited to hear a different tune.

Tal Dror, a member of the Israeli delegation to the UN, told Al-Monitor that last year, when organizers were putting together the first conference, headed by then-Deputy Foreign Minister Danny Ayalon, representatives of the Arab states were vehemently opposed. They tried to find sections of the protocol which could be used to thwart it, but failed. This time, to everyone’s surprise, along with some 30 ambassadors and diplomats who attended the event, two representatives from the Egyptian delegation to the UN were also present. The organizers and Israeli representatives to the UN should have been pleased, because the issues raised at the event were meant especially for them.

The Jewish community in Egypt was one of the most prosperous communities in Arab countries in the 20th century. According to various estimates, it numbered at its peak almost 80,000 members, but most left or fled after the rise to power of late Egyptian President Gamal Abdel Nasser and the Sinai Campaign in 1956. The Egyptian UN representatives stayed in their seats even after the opening address by Prosor and stayed until the very end, even though the ambassador didn’t spare Israel’s neighbors.

“It has been 65 years and the Arab countries have never been held accountable for the crimes that they committed. In six and a half decades, they have never taken responsibility for creating the Jewish refugees.”

Linda Menuhin, who took part in a panel of testimonies by Jewish refugees, left her homeland in 1951 like most Iraqi Jews. I asked her about their demands and to whom they planned to present them.

“I’m not getting into such detail, but we are mostly demanding recognition — recognition of the fact that there is such a thing as Jewish refugees and they have rights that were taken from them.”

And indeed, WOJAC’s central demand is recognition of the fact that in the course of the wars between Jews and Arabs, two populations fled their homes — Arabs from the land of Israel/Mandatory Palestine and Jews from the Arab lands. Therefore, this mutual flight should be regarded as a de facto population exchange.

The second demand of those defining themselves as Jewish refugees, members of WOJAC, is compensation for the property that was abandoned or confiscated when they fled or left their countries. One of the speakers at the conference was Tawfiq Kasav, head of the Jewish community in Aleppo, Syria, until 1989. He told participants about the ordeals of the city’s Jewish community, the persecution it experienced until being wiped out and its property left behind, including works of art and Judaica.

“There’s a political concept that says that even within the framework of a peace process, one must discuss these issues,” says Tal Dror, “Many prominent Jews who were forced to escape left lots of property. That’s why it’s right to bring up this issue now.”

But it’s unlikely that any of the speakers and participants, or even the guests who arrived to listen to the testimonies of the Jews who fled Arab Countries, seriously entertains the idea that financial reparations are a realistic claim in today’s stormy Middle East. Most of the Jews came from President Bashar al-Assad’s Syria, from Egypt which is in economic collapse and Iraq, where an ongoing war between Sunni and Shia claims hundreds of lives each month. Jews also came from Morocco and from Tunisia, where the Arab Spring began. But Tunisia is also in the throes of a severe economic crisis and the last thing one can demand of its leaders is compensation for Jewish property left there.

Even if the demand for reparations is left hanging in the air, the Jews who emerged from Arab lands have much with which to console themselves. Today’s Israel, a gathering of exiles, is an advanced and developed country.

Silvan Shalom is Israel’s minister of infrastructure and development and development of the Negev and the Galilee, and a member of the diplomatic-security cabinet. Speaking at the conference, he told participants about the economic gap created between Israel and its neighbors. His parents immigrated to Israel from the Tunisian port city of Gabes. For years, the family heard stories about the beautiful town. While serving as foreign minister in 2005, Shalom organized an Israeli delegation to Tunisia and included his mother, a resident of the southern Israeli city of Beersheba, so that she could see for herself the place she left and misses.

When she got there, Shalom recounted, the disappointment was great. Gabes didn’t look anything like what she remembered and imagined. “Sixty years ago, Gabes was a beautiful city and Beersheba was a small, gray town erected in the desert sands,” she remarked. Today, summed up her son the minister, Beersheba is flourishing and Gabes is still trapped in the past.