Where Do Babylonian Jewry's Archives Belong?

The archives of Iraq's Jewish community should be returned to Baghdad and serve as the cornerstone for a historic reconciliation between Babylonian Jewry and their homeland. 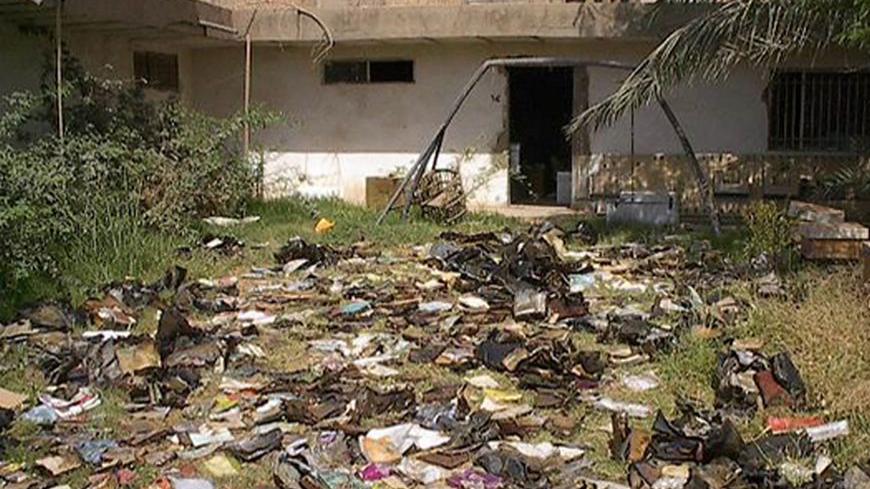 The archive materials in 2003 drying outside of Iraqi intelligence headquarters where they were found in a flooded basement, Baghdad, 2003. - National Archives

Tension has reigned in recent years between Washington and Baghdad regarding the future of a rare treasure trove: the archives of Iraq’s Jewish community. The collection includes about a thousand precious artifacts, mainly books of Jewish law and commentaries that served the Babylonian rabbinical colleges and its eminent rabbis since the 16th century.

For the last decade, the artifacts have been held at the US National Archives and Records Administration in Washington. Experts there have been restoring the archive collection after it was damaged in the American bombings of Baghdad in 2003. The Iraqi government views it as a national asset and demands that it be returned to its authority. In fact, the collection’s status was fixed in a written agreement between the two countries. But now a third party, which is not a party to the agreement, categorically demands ownership of the treasure. They are "the Jews of Babylonia." Are they truly entitled to it?

No one disagrees that the collection is important, even priceless. The Americans imposed a blackout on the collection’s contents as if it were a sensitive security secret. The collection, housed in sealed boxes, fell into the hands of George W. Bush’s army after the fall of Baghdad, and was then flown to the United States. However, we know from leaked information that it includes unique manuscripts: a copy of the Bible’s third section, or Ketuvim (Writings), printed in Venice in 1568; and a book of commentary called "Birkat Avraham" by Rabbi Avraham Ben Elijah Broda from Kushta, or today’s Istanbul, which was published in the same city in 1696. The collection also contains community records such as registration of deaths, births and marriages; ancient prayer books; and Hebrew-language instruction books. For dozens of years, this collection was ignored and left high and dry by Saddam Hussein. In the wake of the attack on the capital city, the basement of the Iraqi Intelligence Agency was flooded and most of the artifacts were severely damaged.

Uncle Sam destroys, Uncle Sam comes to the rescue and restores. In an arrangement signed between representatives of the Iraqi and American governments in August 2003, it was spelled out that the collection would be returned to its homeland after two years of restoration work. But the work was extensive and the fulfillment of the American promise was delayed. The agreement was extended, and the final date for returning the artifacts was set for summer 2014.

The ownership demand of Iraqi Jewry subverts the agreement between Baghdad and Washington. If the Americans decide to honor the Iraqi Jewry request, they will be forced to violate their former commitment. This is an emotionally charged conflict of interests involving moral, religious, cultural and political facets.

“The collection was, at the time, taken by force from the Jewish community in Baghdad and confiscated [by Saddam Hussein]. Therefore, it must return to its rightful owners,” argues Maurice Shohet, president of the World Organization of Jews from Iraq.

Shohet, 64, was born in Baghdad and lives in Washington. “Since the community is now dispersed in several centers around the world, the entity representing this [Iraqi Jewish] community is the one entitled to receive the collection.” Shohet notes that he and his colleagues discussed the issue with representatives of the Iraqi embassy in Washington, but refuses to disclose any details about the content of the talks. He bases his appeal on precedents, such as that of the German government, which returned assets to the Jews that were stolen by the Nazis. “A democratic government is supposed to take into account the circumstances under which the collection was taken in the past, and return it to its owners,” he says.

“I suggest to the Iraqis that they find another forum to demonstrate their fidelity to the homeland,” adds Linda Menuhin, a Baghdad-born Israeli. Menuhin’s father was abducted, by the command of Saddam Hussein, in 1972 and disappeared without a trace. She hopes that the documents will give a hint as to the mystery of her father’s disappearance. “If these documents are so important to the Iraqis, they should be happy to entrust them to loyal hands.”

While the efforts of the Jewish community to appropriate the books are, of course, understandable, it shows that they are ignoring a historic opportunity. As the Israeli expression goes, "Don’t be right, be smart." It behooves the people dealing with the issue to adopt another, harmonious approach and return the treasure to the place where it came into existence and emotionally moved tens of thousands of Torah scholars: the land of Babylonia.

The Iraqi Jews should give the collection, or the lion’s share of it, to the safekeeping of the Iraqi government. In exchange, the latter would recognize the intellectual property rights of the Jews to the collection. A special place in Iraq would be set aside or built for this collection, so that visitors from all over the world would be able to view it and take in its opulence and richness. Thus, a living monument would remain on the banks of the Euphrates and Tigris rivers, testimony to the existence of Jewish life there. Most Iraqi Jews are proud of their homeland and have great empathy for it. They do not turn their backs on their origins, and many of them long for those days. There is no more suitable way to commemorate their past Jewish life in Iraq.

Iraqi-born Jews will not be around in another generation or two, and the traces of the existence of the Jewish community in Mesopotamia will be found only in books. Therefore, the return of the collection to its place of origin should be as much of a Jewish interest as an Iraqi one.

Officially, Israel tends to distance itself from such issues, preferring to leave them to diaspora Jews. Its abstention from handling these issues is designed to remove any obstacles in the way of those who are involved with them — in a reality where Iraq and other Arab states still view Israel as an enemy, at least on paper. But in this case, it has a golden opportunity to breach the wall. This issue is cultural and humanitarian, not a political or diplomatic hot potato that could trip up proceedings before they even begin.

In a world of historic changes, the sacred book treasury can be the first step on the route to rapprochement — not only between Iraq and its Jews, but between the state of Israel and the Iraqi Republic.

David Sassoon, an Iraqi-born Jewish peace activist who lives in London, proposes to establish a museum for Iraqi Judaism in Erbil, the capital of the Kurdish region, and to house the collection there. “There is a conflict, and the way to solve it is through compromise,” Sassoon says. “There is still unrest in Baghdad, but the Kurdish region [in Iraq] is stable and secure, and Jews could visit there without fear. There is also historical logic to this. Jews lived in Kurdistan even before they went to Babylonia.”