An unidentified bride and groom in a photo displayed at an Iraqi Jewish exhibit has been identified by the couple's son, explaining how their wedding photo ended up in Saddam Hussein’s cellar in Baghdad. 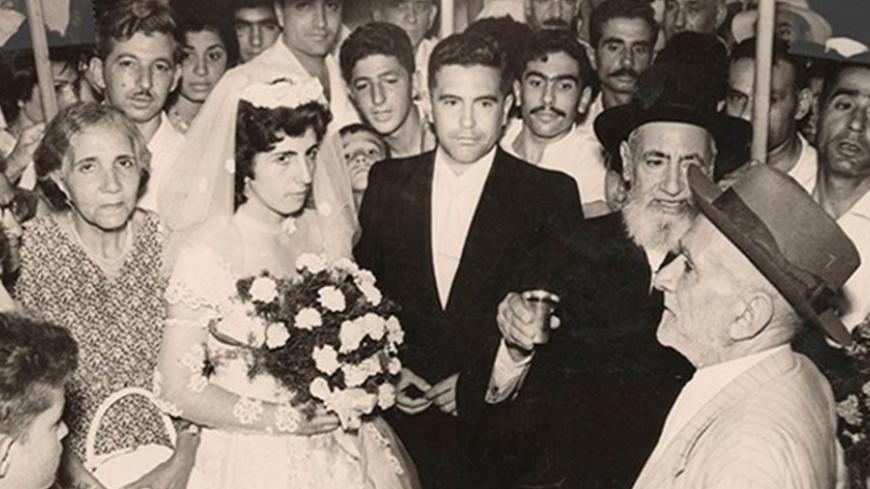 A few days ago, about a year and eight months after I wrote in Al-Monitor about an exhibition of Iraqi Jewish artifacts I had seen in New York, I received an email with information I had been seeking about a photograph that had been on display. “The photo of the couple, which you described so wonderfully, shows my parents, may they have a long life, back in 1959,” wrote Yair Dor from the village of Matan.

On May 6, 2003, US Marines found a hidden archive at the headquarters of Saddam Hussein’s General Intelligence Service. It included rare holy books, photos, documents and various Judaica (designed for the Jewish ritual) that once belonged to the ancient Jewish community of Iraq. This treasure, in an advanced stage of deterioration, had been stored in a moldy cellar.

One member of the Pentagon staff in Iraq was a yarmulke-wearing researcher of Islam named Harold Rhode. He immediately recognized the historical value of the find and how important it was to save it, so he contacted the White House and received permission from Vice President Dick Cheney to ship the items to the United States, to the National Archives. Once the artifacts were preserved, the decision was made to exhibit them. When I went to see the exhibition, the photo of the young couple at their wedding ceremony, surrounded by their excited family, immediately caught my eye.

This is how I described the photo: “A photo of a bride and groom at their wedding ceremony. The rabbi is holding the groom’s hand, and the bride is clutching a bouquet of white flowers. The excited guests, apparently family, can be seen behind them looking up. My parents have a picture exactly like this … Do any of the readers recognize the people in the photograph above?”

“It’s a picture of my parents,” Dor told Al-Monitor, “but its provenance might disappoint you. It wasn’t taken in Iraq. It was shot in Ramat Gan [Israel], at the Kehilat Yesharim synagogue in August 1959, eight years after my parents immigrated to Israel.”

Yair’s father, Moshe Dor (Shohet), now 87, arrived in Israel from Iraq as part of Operation Ezra and Nehemiah, an Israeli-organized airlift that brought many members of the Iraqi Jewish community to Israel during 1950-52. He enlisted in the army and served in the Communication Corps, first as a soldier and then as a civilian contractor, until he retired at age 65. His wife, Rina, nee Aziz, had immigrated to Israel before him. They met in Israel and settled in Ramat Gan, which absorbed more Iraqi immigrants than any other city in the country. Rina worked for years as the secretary of Na’amat, the women’s organization affiliated with the Histadrut, until she retired. The couple had two children. Yair, the eldest, was a career soldier in the Israel Defense Forces who retired from the army with the rank of lieutenant colonel.

“My father was the first member of my family’s second generation [those born in Israel] to get married,” Dor told Al-Monitor. “One of my grandmother’s sisters flew to Istanbul to meet my father’s uncle, who stayed in Iraq after almost all of the community had immigrated to Israel, in 1951. She brought him the photo from his nephew’s, my father’s, wedding. That uncle took the photo back to Baghdad with him. The picture must have made its way to Saddam’s cellars after the Iraqis seized all Jewish property. That is our theory.”

Dor said that neither he nor his family knows from which family member in Iraq the photo was taken. “This picture hangs in my parents’ house, but also in my house and in my sister’s house too. It is the icon on my cell phone, when my parents call. Of course, we were surprised to see what happened to it. It’s a strange story, ” he said. “We knew that the Iraqis seized all sorts of documents [belonging to Jews], but no one would ever have expected to find it among those documents. It has absolutely no value in terms of intelligence. Its only value is sentimental.”

The government of Iraq and the National Archives are still engaged in a heated debate over who actually owns the Jewish archive. The Iraqi government insists, through its ambassador in Washington, that the archive must be returned to Iraq. The Iraqis claim that an archive telling the story of a community that lived in Iraq for centuries should be in the land of the Tigris and Euphrates and displayed at the Iraqi Archives for the public’s benefit. There are, however, no Jews left in Iraq. The last members of the community to leave were Yair Dor’s relatives. One uncle, Elias, immigrated to England in the early 1970s. A second uncle arrived in Israel in 2000.

Maurice Shohet, son of Elias Shohet, now serves as president of the World Organization of Jews from Iraq, based in New York. Obviously, the Iraqi Jewish organization is opposed to returning the archive to Baghdad. In addition, Maurice Shohet contends that the wedding photo of Dor’s parents was exhibited by mistake. He claims it was part of a photo album of his childhood in Iraq, which he donated to the National Archives.

Dor, however, does not accept Shohet's version of events. He and his family are convinced that the account of the wedding photo that they heard from their father — that it went from Ramat Gan to Istanbul and from there to Baghdad and then the United States — is actually what happened. Either way, and even though the photo was not taken on the banks of the Tigris River, the image tells the story of the Jewish community that lived in Iraq for centuries until it finally immigrated to Israel.

At the end of our conversation, Dor directed me to an Israeli Facebook group for Jews of Iraqi descent, Keeping the Iraqi Language Alive. The younger generation of Iraqi Jewish descendants born in Israel speak nostalgically about the culture and traditions of their parents, who lived along the banks of the Tigris and Euphrates. Many of them are working to preserve whatever they can of their parents’ dim memories. The Iraqi Jewish archive found in Saddam’s cellar contains just the kind of memories they want so much to keep alive and preserve for posterity.

by Murielle KASPRZAK and Joseph SCHMID | AFP | May 26, 2022
END_OF_DOCUMENT_TOKEN_TO_BE_REPLACED