Exiled Iraqi Jews in Israel and elsewhere are convinced that the moment has come for Israel to build bridges to Iraq. 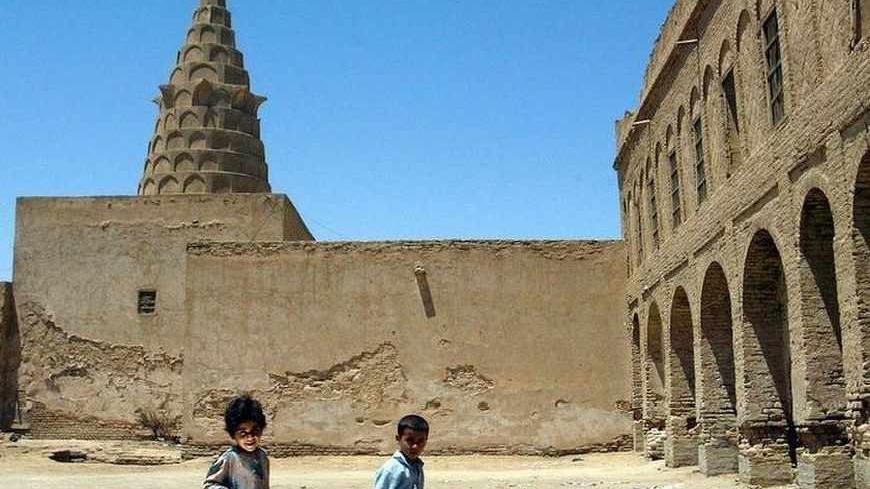 Two children carrying food and water walk in front of the shrine containing the tomb of Jewish Prophet Ezekiel in the Iraqi town of Kifl, 140 kilometers [87 miles] south of Baghdad, July 16, 2003. - REUTERS/Stefano Rellandini

Right before he boarded the plane that would take him to Jordan and from there to Baghdad, the Iraqi public figure swore that this would be his last visit to Israel. The guest, a well-known personality in his homeland, had spent a few days in Israel on a secret visit in fall 2009. Although the Israeli government knew about his trip, not a single government representative found the time to meet with him or even call him. He heard from no one at the Ministry of Defense, and no one from the Foreign Ministry either. His visit was a rare opportunity, but it was squandered. “Israel and Iraq are two key players in the Middle East,” he told an Israeli friend on his way to Ben Gurion Airport. “We have the capacity to benefit from each other. I reached out to you, but no one took my hand.”

The late Foreign Minister Abba Eban famously said that the Palestinians never miss an opportunity to miss an opportunity. It sometimes seems as if Israel has contracted the affliction from its neighbors. The upheaval being experienced by the Arab states offers Israel numerous opportunities, including a chance to make contact with individuals and groups that have been inaccessible until now. There is more than one such address in Iraq, but Israel is too self-involved right now and refuses to initiate anything or even accept an outstretched hand.

Linda Menuhin, an Israeli born in Iraq, is trying to bring these two poles together in her own backyard, so to speak. A journalist and commentator on Arab affairs, Menuhin has been hired as a digital consultant by Israel’s Foreign Ministry. In the past, she worked in radio and television for the Israel Broadcasting Authority’s Arabic-language division. Menuhin told Al-Monitor, “I am conducting a lively dialogue with Iraqi and Arab friends on Facebook, and I’m trying to use my status as an Iraqi to explain Israel’s positions.” She is not alone.

Over the past few years, Israel Prize recipient professor Shmuel Moreh (Muallem), who studies Arabic literature, has managed to develop close ties with Iraqi intellectuals in Iraq and elsewhere. The same is true of the poet Ronny Someck, who meets frequently with Iraqi artists in exile in Europe. Others, like the London-based peace activist David Sasson, maintain close ties with government representatives in Baghdad and Kurdistan.

“The state of Israel spends 24 hours a day worrying about how to keep its citizens safe, with the trauma of the Holocaust hovering all the while in the background,” says Menuhin. ''This burden prevents it from taking a closer look at what is happening in Iraq. It is a major country in the region, mainly because of its geographical location and its oil. Israel should think long term and jump at opportunities.”

And are the Iraqis ready for contact with Israel? Menuhin thinks so: “There’s an old Iraqi proverb that says, ‘In times of trouble, think about your wedding days.’ There is greater involvement with the Jewish question there. Many people recall our contribution to creating modern Iraq and have expressed longing for the days when Jews were a part of society. There are even those who have openly invited Jews to return home to help with the country’s reconstruction. There are also those who recognize the injustice that the Jews suffered when their citizenship was revoked and have expressed regret over it.”

Asked what kind of contacts she would suggest initiating, and through which channels, Menuhin replied, “Turkey is a good place to serve as a middleman. Iraqi Jews in Israel can also help in sending out overtures and establishing a surreptitious channel of communication. It can start with cultural ties involving Arabic music and literature. People in Iraq yearn for Arabic-language translations of Hebrew works. The Jews also left various musical legacies, which can be revived in contemporary Iraq. Efforts to preserve Jewish heritage can also serve as a first channel with which to stitch together an initial relationship. One example of this could be the renovation of Jewish holy sites in Iraq.”

In fact, Israeli artists of Iraqi descent are sometimes subjects of public interest. For example, the liberal Arab news site Elaph has featured translations of chapters on Iraq from Moreh's memoir. An anonymous publisher in Iraq translated and printed "The Dove Flyer," by Baghdad-born Israeli author Eli Amir. “The older generation has a deep-rooted belief that a blessing comes to wherever the Jews are. In the past, the Iraqis experienced this, and not just as some hollow saying either, but as a reality expressed in economic terms,” says Menuhin.

Born in Baghdad in 1950, Menuhin was 21 years old when she fled to Israel by way of Iran with her mother and two brothers. Her father remained behind. Two years after they arrived in Israel — on the eve of Yom Kippur, 5733 (1973) — her father, Yakub Abdel-Aziz, disappeared from Baghdad without so much as a trace. An attorney, her father was a familiar figure in the Jewish community. During those years, when the Baath Party was establishing its power base among the general public under the leadership of Vice President Saddam Hussein, Jews and communists and other opponents of the regime were executed on trumped-up charges in an effort to display the regime’s strength. The mystery behind her father’s disappearance is yet to be solved, but it is assumed that he was murdered at the government’s behest.

In September 2012, Menuhin published a very personal article in Arabic titled “Daddy, I Miss You Now More Than Ever.” Using her personal story, she wondered where the Arab world is headed today. The article appeared on an Iraqi website hosted in Denmark on the 40th anniversary of her father’s disappearance. It received hundreds of “shares” and warm responses. The trauma of what happened to her father continues to haunt her and casts a shadow over the Iraqi component of her identity.

“I adopt those Iraqi aspects as part of me, along with the Israeli components, to create an identity of coexistence,” Menuhin said. “I am at the stage where I come to terms with the conflicted parts within me and make peace with myself.” Her story will be told in the documentary "Shadow of Baghdad," which will soon be completed.

It is Menuhin's assessment that among Iraq’s diverse ethnic groups, it is the Sunnis and Kurds who want relations with Israel. The Shiites are still reluctant, for obvious reasons.

“With the conclusion of the open conflict between Turkey and the Kurds, it seems as if the political obstacle preventing Israel from establishing relations with them, if only on a low level, has been removed. If the Palestinians have a representative in Erbil, there is no reason why there shouldn’t be an Israeli representative there, too. I see this as a state of equilibrium.”

Sasson, the peace activist, believes that anyone who wants to speak to Baghdad today must get a green light from Tehran first. If there is anyone to speak to now, it would have to start with the Kurds, he told Al-Monitor. “They are building up their state and could well become the Hong Kong of the Middle East. In practical terms, they are the first stop for Israel, if it is interested in building a common future with Iraq.”

Menuhin had this to say in response: “Just as there is preventative medicine, there should be preventative diplomacy. The Iraqis, particularly the Sunnis, long to conduct initial talks with Israel to feel out the situation, because they regard Israel as a major technological power, which can help them develop their new state. The Iraqis’ experience with Jews across the generations enchants them.”