Compromise is possible on Palestinian right of return

There is room to negotiate between Israeli resistance and Palestinian insistence on the right of return: the monetary compensation that polls show most Palestinian refugees already favor. 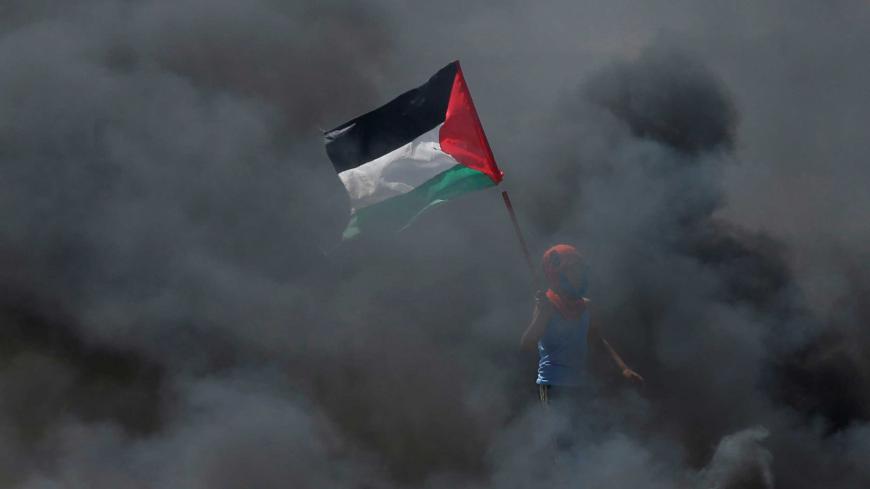 A boy holds a Palestinian flag as he stands amid smoke during a protest at the Israel-Gaza border, east of Gaza City, May 14, 2018. - REUTERS/Mohammed Salem

In his taped video message for the May 14 inauguration of the US Embassy in Jerusalem, President Donald Trump said, “The United States remains fully committed to facilitating a lasting peace agreement.” His declaration did not console members of the shrinking Israeli peace camp. Several days later, the Associated Press reported that the Trump administration plans to present its Israeli-Palestinian peace plan in June. The news did not generate much excitement among residents of the Palestinian refugee camps in the region.

The recent Palestinian protests along Gaza's border with Israel, dubbed the "Great Return March,” focused public attention once more on the seemingly intractable problem of the Palestinians uprooted by Israel’s founding in 1948. No plan purporting to resolve the Israeli-Palestinian conflict, and definitely not one Trump has hailed as the “ultimate deal,” can ignore the volatile issue. Other core divisions between the sides, such as the status of Jerusalem and of Israeli settlements, future borders and security arrangements can perhaps be bridged. The Palestinian demand of the right of return, however, is a non-starter — a red rag even for most of Israel's leftist Zionist Camp. Recent scenes of tens of thousands of Palestinians storming the Gaza fence clutching Palestinian flags appear to have confirmed the political right’s flagship argument that giving up the territories Israel captured in the 1967 Six-Day War would not resolve the conflict.

The following text posted in English by Gaza resident Rana Shubair on the website We Are Not Numbers, appears to buttress this view.

Shubair recounts how she set out with her family on March 30, the date Palestinians call Land Day to commemorate Israel’s 1976 confiscation of Arab lands in the Galilee, for the border with “occupied Palestine.” She vowed, “Each day until May 15, the anniversary of the Nakba [“catastrophe” when more than 750,000 Palestinians were forced from their homeland to create Israel] we will camp by the border to remind the world that we have a right to return home … Everyone there was united under one flag and one motto: We have a right to return to Palestinians’ historic homeland. This overwhelming feeling of unity long has been missing, especially in Gaza … None of us had anything more valuable to lose than what we already had: our home.”

Shubair laments the home that was lost and insistence on her right to “return home.” She is not asking to go back to the once predominantly Arab towns of Ashkelon or Jaffa, a demand that a priori nullifies the two-state solution to the conflict. Jews, on the other hand, are of course entitled to long to go back to their ancestors’ homes in the West Bank's Hebron and to receive compensation for these homes. But these rights do not justify the expulsion of Palestinians from the buildings where they have lived for several decades. Palestinian President Mahmoud Abbas also said in a 2012 interview on Israel’s Channel 2 that despite being a refugee from the Galilee town of Safed, he does not expect to return there. “Palestine now for me is the '67 borders — alongside the state of Israel,” he said.

Three comprehensive polls conducted in the first half of 2003 among 4,500 families living in refugee camps in Lebanon, Jordan and the Israeli-occupied West Bank and Gaza indicate that most refugees favor Abbas’ position. Only 10% want to return to Israel, compared with 72% who would rather live in a Palestinian state or receive monetary compensation. The results were met with harsh criticism by radical Palestinian factions opposed to any compromise on the right of return. They even threatened the head of the Palestinian Center for Policy and Survey Research, Khalil Shikaki, with violence.

After deliberating on a petition by Greek Cypriot refugees, the European Court of Human Rights ruled in March 2010 that claiming a certain land or property as “home” is insufficient to establish a right. An overwhelming majority of the 17 judges agreed that given that 35 years had passed since the petitioners lost their property when Turkey invaded northern Cyprus in 1974, and the local population had changed, the claimants were entitled to compensation in cash, but not necessarily in land. The judges warned that rectifying an old injustice could result in a new injustice. One can infer that UN Resolution 194 of 1948, stipulating that a refugee can choose between a return to Israel and compensation, does not grant every refugee a personal right to return. The 2002 Arab Peace Initiative referred to this resolution as the basis for a just and agreed-upon solution to the refugee problem.

Nonetheless, in a conversation with me at the time, Eyal Benbenisti, a world-renowned professor on international law, argued that there’s a difference between people taking over the homes of neighbors uprooted due to a conflict, as in the Cypriot case, and Israelis who knowingly settle on lands under disputed sovereignty that are subject to negotiations. In any case, the victim who prefers to wait forever and insist on his “right to the land” will one day wake up and realize that a statute of limitation has invalidated his rights.

The youngest refugees from 1948 celebrated their 70th birthdays this year. Their children, grandchildren, even great-grandchildren are languishing in refugee camps and handing down from generation to generation the keys to their homes in Galilee villages — homes in which three generations of Israelis have already been born. To surmount the barrier of the right of return, Israel must recognize the rights of the “original” refugees who wish to return to their villages. At the same time, it should work to establish an international fund that would pay the refugees and their descendants compensation for the property they left behind. Even the impact of taking in these “original” refugees on Israel’s demographic balance, meaning the ratio of Jewish to Arab citizens of Israel, would be negligible compared to the repercussions of continued Israeli rule over the West Bank and East Jerusalem.