Can Palestinian right of return issue be solved?

Palestinians are elaborating creative ideas to solve the complex issue of the right of return so that a two-state solution can be reached. 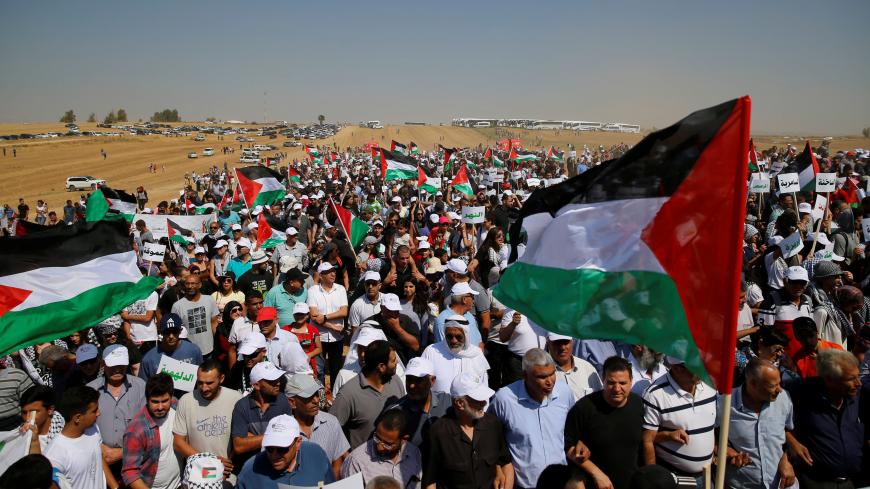 Israeli Arabs and other supporters wave Palestinian flags as they march during a protest seeking the right of return for refugees who fled their homes during the 1948 Arab-Israeli War, at a village near Rahat in southern Israel, May 12, 2016. - REUTERS/Ammar Awad

One of the main reasons for the emphasis on the 2002 Arab Peace Initiative as a basis for a future two-state peace process is that it also entails, in the view of the United States and the European Union, an expression of the Israeli position on the contentious issue of the Palestinian right of return. The initiative says on this point that a joint solution by the parties to the problem of Palestinian refugees should be “agreed upon in accordance with UN General Assembly Resolution 194.” While the initiative is based on a resolution that calls for the return and resettlement of Palestinian refugees to their pre-1948 homes, it still stipulates that the resolution of the issue be agreed upon with Israel.

For the Palestinian national leadership, this is the crux of the conflict. The return of the refugees is the heart of their historical narrative, namely, that Israel was established by robbing the Palestinian inhabitants of their land and homes. Peace and justice can only prevail in this with the return of Palestinian refugees from their diaspora. For Israel, this amounts to national suicide.

An influx of approximately 5 million Palestinian refugees — those who left and their descendants — into sovereign Israel would put an end to Israel as the national homeland of the Jewish people. Therefore, all Israeli governments have rejected the right of return and treated this demand as an existential danger. The issue has been brought up, although only marginally, in all previous peace negotiations between the parties, including in the Oslo talks.

The current Palestinian leadership is well aware that the issue is taboo to Israel. President Mahmoud Abbas, originally from Safed in northern Israel, alluded to this understanding when he told several Israeli journalists in a 2012 interview on Israel Channel 2 that while he wishes to visit his original house, he does not seek to return there.

Following up on the June 3 Paris conference, policy planners in the Palestine Liberation Organization (PLO) are working on creative solutions to all the permanent status issues while maintaining the principles of the Palestinian national position. A senior PLO official told Al-Monitor on condition of anonymity that Palestine will never give up on the principle of the right of return, saying, “This is our historical narrative and dream.” Yet, he added, in return for a two-state solution based on the 1967 lines, the PLO would be ready to discuss practical solutions in line with several important elements.

The first element is that the PLO’s main aim is the achievement, in the foreseeable future, of a Palestinian state based on the 1967 borders with agreed upon land swaps and East Jerusalem as its capital. He stressed that the issue of the Palestinian refugees is central to putting an end to the Israeli-Palestinian conflict.

Another central and essential element would be Israeli recognition of the injustice done by Israel to Palestinian Arabs in 1948 and international recognition of the principle of the right of return. In practical terms, this means that the PLO would be ready to explore the possibility of Israeli-controlled Area C in the West Bank (excluding minor settlement blocs) being designated land on which Palestinian refugees can be resettled in an international effort with Israeli economic contributions.

With that in view, a symbolic (agreed upon) number of the originally expelled Palestinians who are still alive (between 30,000 and 50,000) would be allowed to settle in sovereign Israel within the context of family reunion. All other refugees would be entitled to international compensation to be decided by a multilateral committee headed by Canada and the United Nations. The PLO official added that Palestine would see in such a solution the implementation of UN General Assembly Resolution 194.

Undeniably, this issue is probably the most difficult decision that a Palestinian leader would have to face, and indeed, negotiation should take place on the practical elements of the refugee problem. A senior Israeli Foreign Ministry official who worked on the issue in past multilateral talks told Al-Monitor on condition of anonymity that although these ideas were interestingly creative, there was no chance that Israel would accept them.

In the meantime, the Israeli government would do well to reflect also on creative practical solutions to this critical narrative-based issue. Yet, for that to happen, Israel needs a government that is interested in a two-state solution.