After 67 years, the best way to deal with the Palestinian refugee issue is to allow Palestinians to have their own independent state. 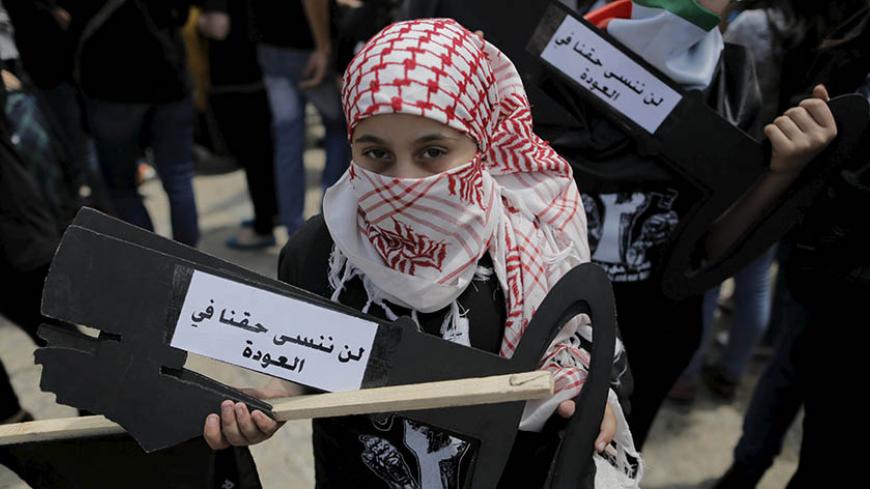 A Palestinian girl holds a cut-out of a key during a rally ahead of Nakba Day in the West Bank city of Bethlehem, May 14, 2015. On May 15, Palestinians commemorate the "nakba" (catastrophe): the expulsion of some 700,000 Palestinians from their homes in the war of 1948, which resulted in the founding of Israel. The Arabic writing reads, "We will not forget our right of return.” - REUTERS/Ammar Awad

Visualizing Palestine, a Lebanese-based nongovernmental organization, created an interactive map that shows the shrinking Palestinian population in Palestine between 1918 and 2015. The graphic, “Palestine Shrinking, Israel Expanding,” demonstrates in a clear and simple way the catastrophe that has befallen the Palestinians as a result of Zionist immigration to Palestine and their (direct and indirect) expulsion.

The Zionist narrative falsely claims that Palestine is a “land without a people for a people without a land.” In the process of colonization and settlement by Jewish immigrants, Palestinians were dispossessed and made stateless. They have remained stateless for 67 years.

Palestinians have repeatedly said that the right of return enshrined in various United Nations resolutions is non-negotiable and does not have an expiry date. Palestinians want Israel to recognize its legal and historic responsibility for the refugee crisis, but they have also said that while this right is inalienable, its implementation is subject to negotiation. Palestinian President Mahmoud Abbas went even further in 2012 and said on Israel TV that he no longer has any desire to live in the city in which he was born and raised, Safad, but would not mind visiting it. In February 2014 in Ramallah, he also told a group of 300 visiting Israelis that Palestinians are not interested in “flooding Israel with Palestinian refugees.”

Resolution of the Palestinian refugee problem was taken up in Resolution 194, passed by the UN General Assembly in December 1948. It is also addressed in the Arab Peace Initiative. Unlike various attempts by Israel and its apologists who insist the problem is insoluble, the Arab plan approaches the refugees' case as something that can be accomplished by consensus rather than clashes. The text on refugees in the Arab peace plan reads, “Achievement of a just solution to the Palestinian refugee problem to be agreed upon in accordance with UN General Assembly Resolution 194.”

The Palestinian and Arab flexibility in regard to implementation of the right of return does not apply to the two-state solution. The 1967 borders continue to be an acceptable reference point to any permanent peace solution. For Palestinians, the creation of a truly independent and contiguous state is the most logical point of entry to finding a long-term solution to the Arab-Israeli conflict, including the refugee issue.

The refugee problem, caused by the violence described by Israeli professor Ilane Pappe as “ethnic cleansing,” is called the “nakba” (catastrophe) by Palestinians. This catastrophe has caused extreme pain and wounds among Palestinians. Unlike the expectations of many Israelis that new generations of Palestinians will forget about Palestine, the right of return continues to take center stage at Nakba Day activities and throughout the year. Generation after generation retains memories of Palestine. The metal key representing the homes that Palestinians thought they were only temporarily vacating has become the symbol of Palestinian refugees and their right of return.

This passion to return might appear to be poetic and sloganeering, but it will continue to be a thorn in Israel’s side as long as the larger Palestinian problem remains unresolved. The most logical way to overcome this popular and passionate issue is to work on providing a tangible resolution to the Palestinian conflict through the creation of a physical and sovereign state. Without ending the occupation and allowing Palestinians to exercise their right of self-determination on their own land, the right of return will continue to haunt Israelis and will be the main talking point for generations of Palestinian nationalists.

Perhaps the most efficient and logical way to overcome what has become the main source of frustration for a people that today numbers more than 12 million is the absence of a resolution to the larger Palestinian conflict. In a strange way, the most rational process for reaching an agreement on this thorny issue is to resolve the larger national conflict. By solving the conflict over land, it can be argued that Palestinian refugees would have a sovereign state to which to return, even if the return is not to the exact piece of land and the home that they and their parents once owned.

After 67 years of exile, the diaspora will not be erased so easily. Perhaps the best way to overcome the years since the nakba and the Palestinian refugee problem is to ensure the creation of a state based on the 1967 borders of Palestine. Short of that, all Palestinians will keep the conflict, and especially the refugee problem, alive, be it in Palestine or in the diaspora.