Israel’s political right has accused Arab Knesset members of treason over their petition to the UN against the new nationality law many consider discriminatory. 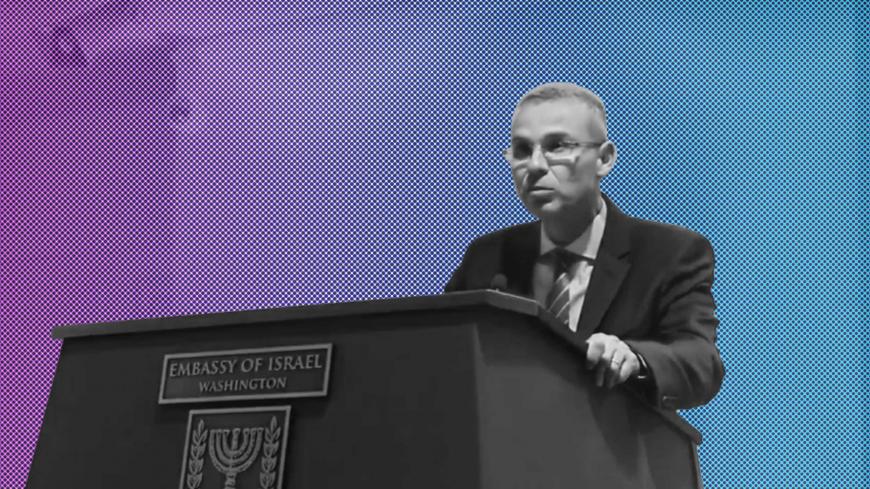 Israeli Tourism Minister Yariv Levin speaks at the the Balfour Gala at the Israeli Embassy in Washington, DC, Nov. 15, 2017. - YouTube/AmericanZionist

Knesset members from Israel's Joint List are asking the United Nations to condemn Israel over its new and controversial nationality law. Hadashot TV news reported Aug. 27 that the Arab Knesset members, Yousef Jabareen and Aida Touma-Suleiman, are working in conjunction with the Palestinian Ambassador to the United Nations Riyad Mansour to get the General Assembly to condemn Israel this September. They want the international body to declare that the nationality law passed in July is reminiscent of apartheid-era legislation in South Africa.

In an interview the next day, Tourism Minister Yariv Levin called the move “treason” and said he hopes and expects the judicial system "to finally put them on trial for the most severe offense in the law book.”

As a trained jurist, Levin certainly knows that these Knesset members will not be indicted for their actions. He is fully aware that they already enjoy parliamentary immunity. As such, his statement raises a question: By exactly what legal standards has he determined that what they did constitutes treason?

Levin wasn’t the only minister to react to the news with extreme vitriol. Minister of Housing and Construction Yoav Galant said that their actions crossed a red line and stated, “There is no room in the Knesset for those who act against Israel's interests.” Prime Minister Benjamin Netanyahu responded through his confidants, who said, “The cat is out of the bag.”

Israel’s Ambassador to the UN, Danny Danon, is busy reacting and responding to the issue, going so far as to send a letter to Knesset Speaker Yuli Edelstein, saying that these Arab Knesset members are causing enormous damage to Israel in their efforts to undermine the legitimacy of the state. When presented with this “incriminating information,” Edelstein reacted just as sharply. “Knesset members, who receive a salary from the state and are granted a comprehensive parliamentary toolbox,” he said, “have the gall to collaborate with our enemies and tarnish our reputation around the world. Anyone who cooperates with the Palestinian Authority against Israel must ask himself whether his place is in the Palestinian Parliament or the Israeli Parliament.”

Later, the chairman of the Knesset’s House Committee, Miki Zohar, announced that he would convene his committee for a special recess session to discuss ways to punish the offending Knesset members.

After two straight days of the issue figuring prominently on the national agenda, it appears that Danon has reason to be pleased. The political and media ruckus that he instigated succeeded tremendously. He featured in the headlines as a defender of Israel’s interests who exposed a subversive effort by Arab Knesset members. As far as his voters on the right are concerned, he has proved himself by taking an active role in countering a horrible act intended to sully Israel’s reputation in the international community.

Danon not only succeeded in getting the Knesset speaker and his colleagues on the right to react aggressively. He was also able to elicit a response from the leaders of the center-left, who also criticized the Knesset members.

The most abrasive of these responses came from Yesh Atid chair Yair Lapid, who described the appeal as subversive and disgraceful. Head of the Zionist Camp Avi Gabbay tweeted that Joint List Knesset members “continue to denigrate our country everywhere.”

Even Tzipi Livni, the leader of the opposition and one of the most stalwart opponents of the nationality law, expressed her reservations about the efforts to raise the issue with the United Nations.

The center-left's aggressive line, so much like that of the right, is causing damage to the struggle against the nationality law that it has been leading. As a reminder, lines such as, “We are ashamed of what you are doing to the country,” and “Netanyahu continues to incite and divide the country,” were integral to Livni’s attacks on Netanyahu after the law was passed.

The Arab Knesset members were elected to represent Israeli Arabs, who constitute some 20% of Israel’s population. They are the ones who stand to suffer most from the discriminatory nationality law, with its clauses that assault the principle of equality. The appeal by the lawmakers to the UN is part of a legitimate struggle that they are waging against a law that they deem harmful. It is the direct progression of a series of events that included ripping the proposed law to shreds in the Knesset plenum after it was approved and the Aug. 11 mass demonstration in Tel Aviv.

The UN petitioners simply carried the protests of Israel’s Arab population to the diplomatic level. They acted within the law, in an effort to present Israel’s nationality law in a negative light to the rest of the world. This is not treason but an effort to expose the problems of a law that even the leaders of the center-left consider to be disastrous to Israel’s democratic character. They never hid what they were doing. They gave interviews, they wrote Facebook posts, they delivered speeches and they even demonstrated. The whole world heard them. The whole world saw them.

But Danon took the issue to extremes, intentionally, while successfully carrying the Israeli political debate to the United Nations. Politicians on the right know just as well as the Arab Knesset members that the UN has no way to intervene. Even a formal UN condemnation won’t change anything. On the contrary, it will actually serve the narrative of the right that the international body is not objective when it comes to Israel and that the Joint List is nothing more than a bunch of “traitors.”

The Knesset members wanted to embarrass Israel and prove to their constituents that they are fighting on their behalf. Danon and the right may have been serving their own personal interests with their responses, but they were also serving their peers. Joint List Chairman Ayman Odeh was right in pointing out, “All in all, this is public diplomacy at its best. The nationality law delivered a mortal blow to the principles of equal rights for all citizens and to the idea of a democratic space.”

In terms of results, nothing has happened yet. Nevertheless, the right has taken advantage of a nascent move by Arab Knesset members to serve their own interests. Their attacks and charges of treason are not only disproportional to what their Arab peers are planning, but they are spinning out of control. The volatile atmosphere caused by the nationality law has already resulted in acts of violence by Jews against Israeli Arabs. Under these conditions, it is more than ever incumbent on the country’s elected representatives to show responsibility before they go accusing their peers of treason.