Iraqis split over US military decision to stay in Iraq

Iraqi Shiite politicians and armed groups close to the parties in power disagree over the international coalition’s announcement that it will keep its forces in the country. 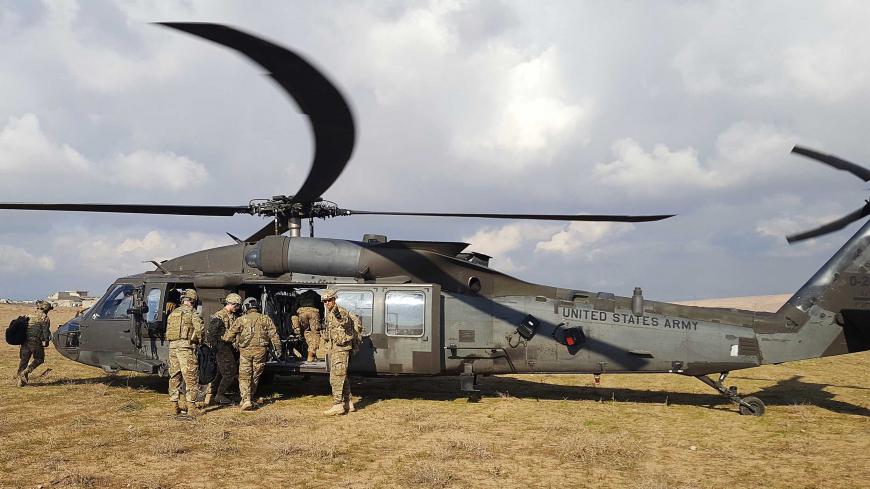 US soldiers ride in a helicopter at a military base north of Mosul, Iraq, Jan. 4, 2017. - REUTERS/Stephen Kalin

Iraq's political circles are divided over the recent US-led coalition's announcement that its military forces will remain in Iraq indefinitely.

Coalition spokesman Col. Sean Ryan said Aug. 19, “We’ll keep troops there as long as we think they’re needed." Once the Islamic State (IS) is defeated, the country will still need help stabilizing, "so that’s one of the reasons we’ll maintain a presence.”

The announcement came two days after the US State Department warned citizens against traveling to Iraq because of "terrorism and armed conflict."

Some opposition voices against the US presence in Iraq have seemed less harsh in recent months, though they say the extension must be approved by the Iraqi parliament. But members of some armed groups affiliated with Iraq's Popular Mobilization Units (PMU) — an umbrella military organization with ties to Iran — absolutely reject the US presence in Iraq. One PMU faction, the Hezbollah Brigades, said the US administration is hiding “ulterior hostile motives” by keeping its forces in Iraq.

At the official government level, Prime Minister Haider al-Abadi, who is heading a caretaker government, has yet to comment on the US announcement. However, Ihsan al-Shamri, an adviser in Abadi’s office, defended the US decision. “There are no changes regarding the presence of US forces in Iraq,” Shamri told Al-Monitor. “The government is negotiating with the US side on changing the missions of US military advisers from the stage of war to the stage of peace.”

He added, “As the war against IS has ended, it's necessary to change the mission of those [US advisers] to cope with the new post-victory period.” Shamri further said, “[Abadi] is now thinking about preventive security. … This is why the talks [with the international coalition] are focused on the US providing training, armament and intelligence to the Iraqi armed forces, namely information on [the situation] on Iraqi borders with neighboring countries.”

Back in April, the international coalition announced that major combat operations against IS in Iraq had ended. The coalition declared it would deactivate the land forces' command headquarters in the country and shift its role from supporting combat operations to developing Iraq’s military-related capabilities.

The Pentagon estimates 5,200 US troops are deployed in Iraq to provide training and consultations to Iraqi security forces. However, media outlets talk about the presence of more than 7,000 US troops.

Saad al-Matlabi, a member of the State of Law Coalition led by Nouri al-Maliki, said that although Abadi apparently thinks otherwise, “The decision to keep the US forces in Iraq doesn't fall under the prerogatives of the [administration], whose powers are executive.” Rather, he told Al-Monitor, “This decision should be discussed in parliament."

He added, “We should ask Abadi, who says [the decision] falls within the Strategic Framework Agreement [SFA] of 2008, according to his associates: Under which article of this agreement does the decision to extend the US presence in Iraq fall?”

Matlabi believes the agreement is defunct, as the US refused to activate it when IS occupied a third of Iraq’s territory in June 2014.

"Washington had [temporarily] frozen the SFA following disputes with former Prime Minister Maliki. But the US reactivated the agreement after Abadi came to power, and thus [all talks] are ongoing now under the framework of the SFA.” Because of this, he said, “The decision to keep the US forces in Iraq doesn't need to be submitted to parliament."

As the Shiite armed factions have reduced their threats to US forces deployed at military bases in Iraq, it seems no military clashes will erupt between the two sides anytime soon. Yet the factions still reject the US presence, and their positions often fluctuate depending on relations between Tehran and Washington. They could resume their threats if relations between US President Donald Trump’s administration and Iran continue their downward spiral.

Hassan Salem, the head of parliament's al-Sadiqoun Bloc (which is affiliated with PMU faction Asaib Ahl al-Haq), believes Iraq's position should be determined by legislators. Yet he called on Abadi not to bow to the US decision to keep forces in Iraq. The armed factions still consider the US an “occupying” state that negatively affects Iraq.

On Aug. 20, Salem distributed to reporters a statement that said Abadi "must respect the people’s will and refuse to succumb to US pressure to keep its forces [in Iraq].”