The Pentagon is removing mine rollers and armored carriers from Iraq as it draws down its presence in the country. 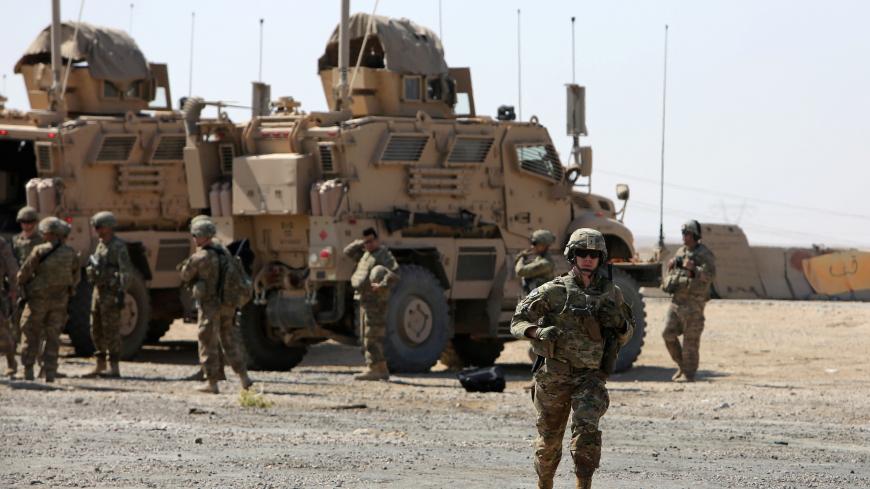 A US soldier runs at a military base near Mosul, Iraq, where Iraqi Security Forces were fighting the Islamic State, June 21, 2017. - REUTERS/Marius Bosch

The Pentagon is reversing a decision to send mine-clearing equipment and armored carriers to Iraq, saying they are no longer needed for the fight against the Islamic State (IS).

In a June 22 letter to Congress seen by Al-Monitor, Deputy US Defense Secretary Patrick Shanahan writes that more than two dozen armored carriers and equipment to clear mined roads are “no longer required to support the Iraqi Security Forces.” Instead, they will be converted to Pentagon stocks to be used in Syria.

Shanahan’s letter doesn’t make clear what prompted the Pentagon’s decision to shift the equipment out of Iraq. The vehicles, which according to US Army doctrine can support a brigade of up to 3,500 troops, had not yet been transferred to Iraqi soldiers in the field.

It’s not immediately clear where the equipment would be used in Syria, although State Department-led demining efforts in the war-torn country have mainly focused on the former IS capital of Raqqa. The city faces a World War II-level cleanup of unexploded mines and improvised explosive devices, US officials have told Al-Monitor.

“The Department continues to support our partners, the Iraqi Security Forces (ISF) and the Syrian Democratic Forces (SDF), in their efforts to defeat [IS] and prevent its resurgence,” Pentagon spokesman Sean Robertson told Al-Monitor. “The transfer of route clearance equipment to Syria will assist the SDF in successfully retaking the last remaining [IS] held territory in Syria.” In a statement released Friday, the US-led coalition fighting IS said the Kurdish-dominated SDF had liberated al-Dashishah, in the countryside of Northeastern Syria, the region where most of the 2,200 American troops in the country are based.

The Iraqi Embassy did not respond to requests for comment in time for publication.

The move appears to be another step in drawing down equipment and supplies used in the Pentagon-led campaign to defeat IS. In February, The Associated Press reported that the Donald Trump administration had begun to reduce the number of US troops in Iraq and was shifting weapons and other assets to Afghanistan. Robertson told Al-Monitor that the Pentagon would continue to “redirect equipment to where it will be most effective” when authorized.

The Pentagon officially declared an end to major combat operations against IS in April, shutting down the land forces command that oversaw that military campaign, but elements of the US 10th Mountain Division said it could bring home some troops early. The Pentagon estimated in December that 5,200 US troops are serving in Iraq.

At the NATO Summit in Brussels last week, Canada announced it would be taking control of the alliance mission to train the Iraqi army. Iraq’s military is still recovering from the IS fight that significantly eroded the fighting power of the Iraqi Security Forces and the elite Counterterrorism Service, which lost 40% of its combat power in the eight-month battle of Mosul, according to a 2017 Pentagon assessment.

Meanwhile, the ascendance of Shiite cleric Muqtada al-Sadr and his Sairoon Alliance in May’s parliamentary elections has cast doubt on the Defense Department’s future presence in Iraq. Sadr announced an alliance last month with Hadi al-Amiri, the founder of the Iran-backed Badr Organization, to try to form a new government. The party of Washington’s preferred candidate, sitting Prime Minister Haider al-Abadi, finished third in the May 12 election.

The Pentagon doesn’t have a long-term legal agreement to keep US troops in Iraq. US Central Command chief Joseph Votel said today, however, that he had seen no changes in Baghdad’s attitude toward the current arrangement, even as the NATO-led training mission begins.

“The government of Iraq has obviously been very, very supportive of this, and this initiative, which largely grew out of our secretary of defense and the secretary-general of NATO, it’s something that we see as very complementary to our efforts here,” Votel told reporters at the Pentagon. “I think that we’ll have an impact on the institutional development of the Iraqi Security Forces and security sector reform efforts that have been underway that the Iraqis have learned to diagnose for themselves.”

This story was updated on July 20, 2018 with comment from the US Department of Defense.