Iraqi Kurds, who remember the help they received from Iranian Kurds in the past, want to return the favor now that their brethren are suffering under US sanctions. 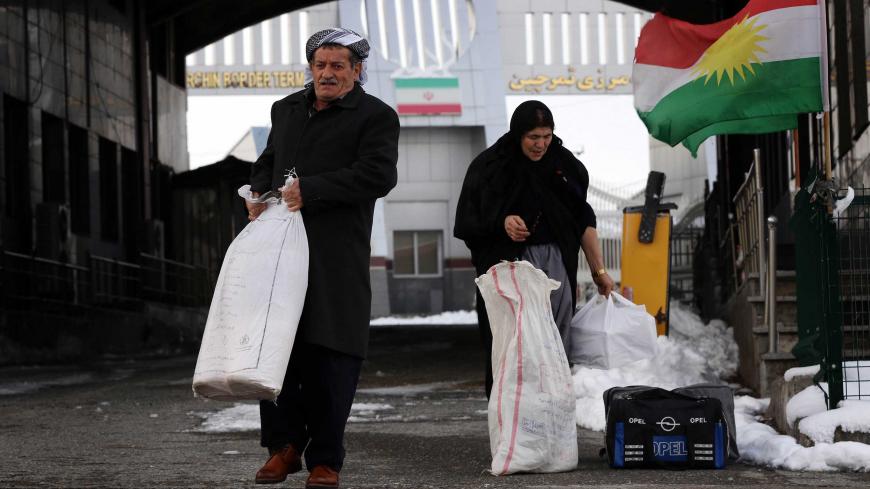 Dyari Abdulla carried a 20-kilo (44-pound) bag containing rice and sugar on his back on the border between Iran and Iraqi Kurdistan near Halabja. He waited in an orchard until his relatives from a nearby town in Iranian Kurdistan arrived, then he handed over the bag. “My relatives are suffering because of the high prices in Iran," Abdulla told Al-Monitor.

He remembers the harsh living conditions experienced by Iraqi Kurds in the 1990s when thousands of people died due to malnutrition because of international sanctions on Iraq. Like thousands of other young Iraqi Kurds, Abdulla risked his life trekking across the mountainous border illegally and flooding big Iranian cities seeking work so he could send money back to his family to survive. Now he fears for those across the border.

"It's going to get worse for people," Abdulla said.

Now, as Washington tightens the screws on Iran with crippling sanctions to bring the ayatollahs to their knees, hundreds of Iranian Kurds are flooding into Iraqi Kurdistan in search of work.

The US sanctions are causing turmoil in Iran, with the Iranian currency — the rial — losing half its value since April. High inflation, the lack of employment and spikes in the prices of essential commodities have caused intermittent protests across Iran in recent months.

“Let me be clear: The reimposition of the sanctions, we think, is already having a significant effect on Iran’s economy and on, really, popular opinion inside Iran,” US national security adviser John Bolton told Reuters Aug. 21 in Jerusalem. US President Donald Trump "has made it very clear — his words — he wants maximum pressure on Iran, maximum pressure, and that's what's going on,” Bolton added.

The United States appeared to have scored a victory when Iraqi Prime Minister Haider al-Abadi surprised many by stating Aug. 7 that his government, while opposing the sanctions, nonetheless abides by them. This baffled many influential figures in Iraq, given the tremendous influence Iran exerts in Iraq and the Kurdistan Region in all spheres including political, military and economic.

"I call on everyone to stand with the Islamic Republic of Iran and assist it," Ammar al-Hakim, head of Iraq's Hikma bloc and a close ally of Iran, said Aug. 8.

Facing huge opposition from Kurdish and Shia circles, Abadi soon softened his position on the sanction but has taken some measures. Ahmad Haji Rashid of the Iraqi parliament’s Finance Committee told Kurdish newspaper Azhans on Aug. 18, “The Iraqi government has decided to stop importing vehicles from Iran; moreover, the Iraqi banks do not do any trading with the Iranian banks, but it is difficult for Iraq to comply with all the measures. … Iraqi compliance with the American decisions to stop trading with Iran will create instability in Iraq, given the Iraqi economy is tied to the Iranian economy.”

Reuters reported Aug. 21 that the Iraqi government “plans to ask Washington for a waiver” from some sanctions, given the close trade ties between Iraq and Iran.

There were mixed messages from Kurdish circles in Iraq about the sanctions. The Kurdistan Regional Government (KRG) representative in Tehran, Nazim Dabagh, said relations between the Iraqi Kurds and Iran are historical. “Abadi was hasty and shouldn't have taken such a position, because his government is a transitional government,” the veteran Kurdish diplomat said.

He added, however, that the KRG should be cautious in dealing with both the Iranians and Americans. “I believe the Kurdistan Region should tread carefully and not become involved" in US-Iranian rivalries that would "use Iraq and Kurdistan as a battleground to settle scores," he told Al-Monitor from Tehran.

But KRG Prime Minister Nechirvan Barzani, who spent a formative part of his life in Iran and speaks fluent Persian, was quoted Aug. 16 by Rudaw — which is affiliated with his Kurdistan Democratic Party — as somehow supporting the sanctions. “To deal with US sanctions on Iran, the Kurdistan Region will take a step as part of Iraq and will abide by Iraq decisions. To that effect, we have spoken to the Americans and Iraqis, and we have asked for a US delegation to visit us and clarify which goods are allowed [to be traded] and which are not,” Barzani said.

As the Iraqi and Kurdish parties debate the wisdom of abiding by the American sanctions, the Iranian Consulate in Sulaimaniyah, Iraq, announced Aug. 18 a huge boom in the number of Iraqi Kurds visiting the country during the holiday season thanks to the strong Iraqi dinar against the rial. The consulate said that in the first half of August, it issued 2,800 visas every day, while the figure was 630 daily in the previous year.

Washington has tried to limit Iran's power in Iraq since US forces arrived there in 2003, but to no avail. It's not clear if Washington will succeed this time around, given the complexities of the relations between Iran and Iraq, including the Kurdistan Region.

Abdullah says he will continue to help his relatives across the border in Iran, as even more difficult times are approaching when US sanctions on the oil and gas sector kick in November. “Iranian Kurdistan was a lifeline for us when we were under sanctions,” he said.

Dabagh believes that even if Iraq complies with US sanctions, the KRG could act independently “to help in whatever ways possible to assist [Iran]” in order to reciprocate Iran’s friendship over the past six decades. “The countries that have come to the region for their own interests and to incite wars and create problems — I believe if their interests were realized tomorrow, they would abandon us once again,” he said.