Iraqi Kurds have performed a balancing act to remain largely impartial in the conflicts swirling around them. 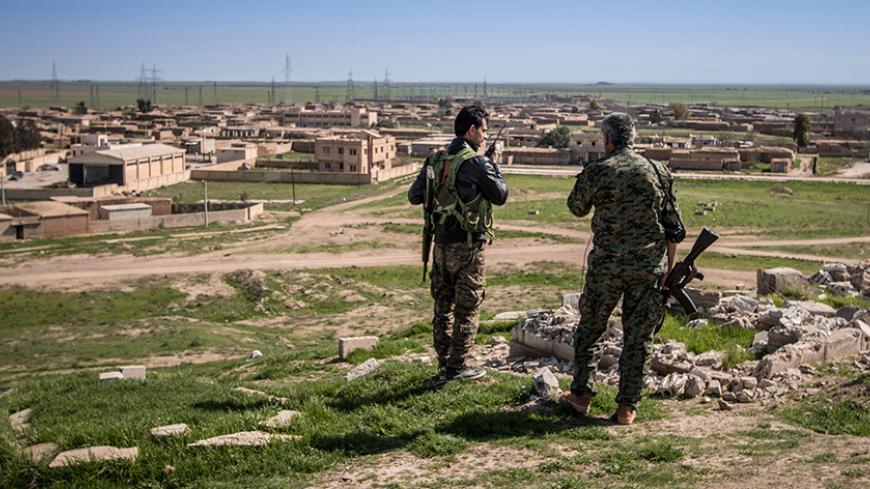 ERBIL, Iraq — As a coalition of Sunni Arab states led by Saudi Arabia targets Shiite Houthi forces and their allies in Yemen, Iraqi Kurds are watching with concern and caution, wondering how the repercussions of the region's deepening sectarian conflicts might affect them.

Sandwiched geographically between opposing Shiite and Sunni regional powers such as Iran and Turkey, Iraqi Kurds wonder how long until they are dragged into the unfolding regional hostilities.

"If the struggle reaches its pinnacle and leads to an even deeper polarization, Kurds might be forced to become part of it," said Muthana Amin, a member of the Iraqi parliament from the Kurdistan Islamic Union. "If Kurds become part of this struggle, then we will be serving outside agendas and will end up empty-handed."

In recent years, Kurds have shown signs of division in face of regional polarization. The eruption of the Syrian revolution in 2011 divided the largely united Iraqi Kurds regarding the Kurdish response to Syrian events. The two major Iraqi Kurdish groups, the Kurdistan Democratic Party (KDP) and the Patriotic Union of Kurdistan (PUK), appeared to be aligning themselves with opposite regional camps.

The KDP, led by Iraqi Kurdistan President Massoud Barzani, adopted a pro-opposition stance, as did most of the Sunni states in the region, from Turkey to Saudi Arabia and Qatar. The PUK, led by former Iraqi President Jalal Talabani, refrained from supporting that policy and has been seen as closer to the Iran-led camp.

While most other regional actors possibly chose allies based on sectarian identities, Iraqi Kurdish politics are hardly defined in terms of Sunni-Shiite affiliations. In fact, both the KDP and PUK are heavily dominated by secular elites.

"It's their geopolitics that dictates their decisions," said Hiwa Osman, an analyst of Iraqi and Kurdish affairs based in Erbil. "The difference is understandable: The KDP lives on the border with Syria, the Islamic State [IS] and Turkey. The PUK lives on the borders of Iran and [the rest of] Iraq and has no borders with Turkey."

The occasionally divergent policies on important issues in Iraq and the region are due to longstanding mutual distrust between the parties. Instead of empowering the Kurdistan Regional Government (KRG) to formulate and direct Kurdish policy on Iraqi and regional issues, the KDP and PUK appear to be taking affairs into their own hands. While the KDP is advancing its vision through its control of KRG senior positions such as president and prime minister, the PUK acts relatively independently using its affiliated armed forces. The latter also has control over local administrations in Kirkuk and Sulaimaniyah provinces, putting it at odds sometimes with official KRG policy.

For instance, while the KRG (and KDP) are against the formation of Iranian-backed paramilitary Popular Mobilization Units in areas under the Kurdish peshmerga's control, the PUK has adopted a more lukewarm position, allowing some units to operate in areas under PUK control.

During a civil war in the mid-1990s, the KDP and PUK fought over limited local resources. The KDP came to rely on Turkey for assistance, and later the Iraqi government, while the PUK enjoyed Iran's support. At the end of the bloody war in 1997, the two parties established separate spheres of dominance, with the PUK controlling southern Iraqi Kurdistan and the KDP controlling the north.

Following the fall of Saddam Hussein's regime in 2003, the two armed Kurdish parties worked toward establishing a united administration, and demonstrated unprecedented unity in dealing with many national and regional issues. However, in more recent years, the two parties have pursued different policies vis-a-vis such crucial issues as dealing with the central government in Baghdad and the extent of their relationships with regional actors.

But when IS overran large parts of Iraq in June 2014, the KDP was initially reluctant to act against the group, viewing its emergence as an outcome of the Shiite-Sunni conflict among Iraqi Arab populations — a conflict that did not involve the Kurds. In contrast, the PUK set out to engage IS in northern Diyala province in June 2014, arguing that IS posed a threat to Kurdistan's security.

Now that the Sunni Arab states, mostly from the Gulf, have formed a military and diplomatic coalition to check Iran's growing influence, Iraqi Kurds are asking how they will be impacted by the tectonic power shifts occurring in the region.

"There is a big struggle taking place in the region and no side will be immune to its sparks," said Firsat Sofi, a KDP member in the Iraqi Kurdistan parliament. "If Arab states undermine Iran's interests in Yemen, then Iran will seek to retaliate in a place like Iraq or Syria, where it has established its presence."

Despite the occasional leaning toward one regional power or the other, Iraqi Kurds have not become active members of regional conflicts. Whereas the Iraqi government has struggled to develop ties with Sunni Arab states and Turkey, the Kurdish region has been on relatively stable terms with Iran, Sunni Arab countries and Turkey, despite occasional ups and downs.

Sofi believes that divisions among Kurds might make them susceptible to bend under intense regional pressures. Others are more hopeful.

"The big challenge for Iraqi Kurds is to keep the balancing act that they have done so far," Osman said. "One thing we should not forget about Iraqi Kurdistan, and the Kurds in general, is that they are not genuinely part of this sectarian ideological conflict in the Middle East."

Amid the rapid destabilization, some see an opportunity if Kurds play their hand right.

"In Kurdistan we are far smaller than our neighbors to be able to ignore any of them," said Saadi Pira, a prominent member of the PUK's political bureau. "But Kurds can benefit from such regional divisions, as they present opportunities as well."

The Kurdish position in Iraq was strengthened when Shiite and Sunni Arabs in the country did not see eye to eye, thus allowing the Kurds to position themselves as king-makers. But it remains unclear if the Kurds can earn from broader regional Shiite-Sunni power struggles between powerful states.