How new alliance among Iraq's Kurds might actually deepen divisions

The recently formed alliance between Gorran and the Patriotic Union of Kurdistan has raised the ire of the Kurdistan Democratic Party, deepening divisions in Iraqi Kurdistan. 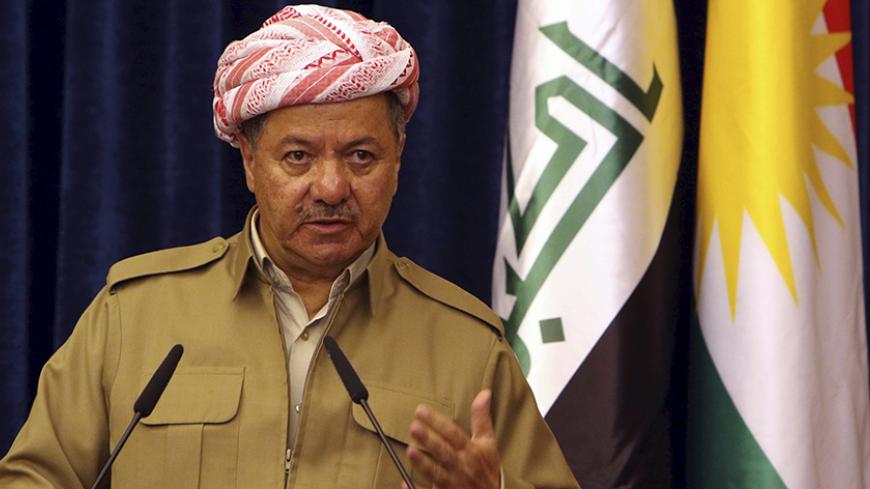 ERBIL, Iraq — Often touted as the main beneficiaries of Iraq's post-Saddam Hussein order, the Kurds obtained political recognition for their autonomous region in the country's 2005 constitution and have played what sometimes appears to be an outsized role in Iraqi politics. In key elections in 2005 and 2010, the Kurds' unity landed them the role of kingmakers, deciding who would get to sit in the coveted prime minister's office. Today, however, that unity appears to be history. The Kurds are now so fragmented that they apparently cannot agree on how to deal with the Baghdad government, jeopardizing their stature and position in the country.

An alliance formed in mid-May by two of Iraqi Kurdistan's main parties, the Patriotic Union of Kurdistan (PUK) and Gorran, has had the ironic effect of bringing Kurdish differences to the surface. The rifts among the Kurdish groups originally stemmed primarily from disagreement over governance in Kurdistan and the failure to devise a viable power-sharing arrangement. Disappointed by what they viewed as unilateralism on the part of the hitherto dominant Kurdistan Democratic Party (KDP), the PUK and Gorran signed a deal to join forces and form an alliance to be reckoned with in Kurdistan and in Baghdad. The PUK-Gorran bloc, with 30 seats in the Iraqi parliament, is larger than the KDP's, which has 28 parliamentarians — 3 of whom represent (Christian and Shabak) minorities.

The growing state of Kurdish division has now given birth to the PUK and Gorran perhaps seeking to assert themselves and their preferences not only in Kurdistan, but also in Kurdish relations with Baghdad. With regard to the latter, the PUK and Gorran are in favor of a more reconciliatory approach, while the KDP — whose leader, Massoud Barzani, is the de facto president of the Kurdish region — insists that Kurdish-Baghdad relations are at a dead end and the Kurds should part ways with Iraq.

“We favor dialogue to resolve the disputes with Baghdad,” Shwan Dawudi, a PUK member of the Iraqi parliament, told Al-Monitor. “We [and Gorran] will, from now on, work as one bloc. [We] want to move things forward and play a positive role in settling the disputes.”

The PUK-Gorran agreement was facilitated by the KDP's humiliating treatment of Gorran. In October 2015, after KDP offices came under attack by protesters in Sulaimaniyah, Gorran's stronghold, the KDP prevented Gorran's Yousif Mohammed Sadiq, speaker of the Kurdistan parliament, from entering Erbil, the Kurdish capital, to carry out his duties. That same month, the KDP also dismissed five Gorran ministers in a Cabinet shuffle.

Furious about the changed circumstances, Gorran negotiated a deal with the PUK, a once-powerful partner in the Kurdistan government and KDP ally. The PUK's popularity had suffered considerably after a group of its leaders split from the party, supposedly because of disagreements over how the PUK was run, to form Gorran in 2009. Now the PUK hopes to regain its past influence by allying with Gorran.

Although fissures in Kurdish ranks are nothing new and the Kurdish parties have had disagreements in recent years over various issues — such as dealing with the Syrian crisis, Baghdad and local governance — handling Kurdish relations with Baghdad had until recently largely been the domain of the Kurdistan Regional Government (KRG), which the KDP dominates. The KRG and Baghdad have been engaged in a longstanding disagreement over the KRG's handling of energy resources and disputed territories scattered over Kirkuk and Ninevah provinces.

“Now the KRG is semi-paralyzed, and there is no institution to monitor it after the parliament was rendered dysfunctional by the KDP. Its decisions represent the KDP, and its relations with Baghdad are according to the KDP's interests and preferences,” Kawa Mohammed, a prominent Gorran member of the Iraqi parliament, told Al-Monitor. “The KDP needs to act wisely and step forward so that Kurdish parties can agree on how to deal with crucial issues, including relations with Baghdad.” In addition, given that the International Monetary Fund is expected to give a $5.4 billion loan to Iraq, Mohammed said, the KRG should mend ties with Baghdad so it can receive a portion of the funds to help address its severe budget deficit.

In recent weeks in Kurdistan, however, events took a dramatic turn when Gorran rejected a June 23 call by Barzani for a meeting of all Kurdish parties to discuss preparations for a referendum on Kurdish independence from Iraq. Gorran claims no longer to recognize Barzani as KRG president following the controversial extension of his tenure in August 2015. Meanwhile, the KDP refuses to acknowledge the Gorran-PUK alliance, which it sees as a threat as the largest political bloc in Kurdistan. The KDP has repeatedly said it is willing to sit down with Gorran and the PUK separately, but not a joint delegation.

Trying to assert their newfound weight, members of a Gorran-PUK delegation met with senior Iraqi officials June 25 in Baghdad. The KDP used the opportunity to attack the two parties in the media, accusing them of deviating from the Kurdish position toward Baghdad.

“Iraq is in no better shape than us. What would encourage us to go back to Baghdad to seek their assistance?” Renas Jano, a KDP member of the Iraqi parliament, said to Al-Monitor. Jano believes internal Kurdish divisions do not justify returning to Baghdad, citing historical examples of previous deals between Kurds and Baghdad that have collapsed.

Acknowledging the current deadlock in Iraqi Kurdistan's politics, Jano believes the KDP should use the Gorran-PUK alliance as an opportunity “to work out a new agreement” on how to handle various challenges. If the new alliance insists on approaching Baghdad outside KRG official policy, it would effectively split Kurdish decision-making and undermine the Kurds' position vis-a-vis the national government.

As a result of a Kurdish civil war, Iraqi Kurdistan was divided into two separate zones from the mid-1990s to mid-2000s. Thus, the chances of a physical separation cannot be dismissed if the PUK-Gorran alliance and the KDP continue to pull away from each other.

With the Islamic State (IS) on a downward trajectory in Iraq, various actors are vying for influence in the post-IS order. While the Kurds' unity ensured their remarkable gains after the collapse of Saddam's regime, their current fragmentation might adversely affect their standing and gains in post-IS Iraq.

“Unless Kurdish leaders set aside their personal egos and rivalries for the sake of a greater Kurdish cause, the post-IS era could be disastrous for the Kurds on the national and international levels, [as] the international community will lose the current level of interest in the Kurdistan Region once IS is gone,” Yerevan Saeed, a Kurdish affairs analyst, told Al-Monitor. “The Sunnis are crushed in Iraq, and you have powerful [predominantly Shiite] Popular Mobilization Units backed by Iran, and the Iraqi government backed by both Iran and the United States, and they will pose serious threats to the current status of the Kurdistan Region.”