Long-time Kurdish rivals Gorran and the Patriotic Union of Kurdistan recently reached an agreement that might further entrench Kurdish division in Iraqi Kurdistan. 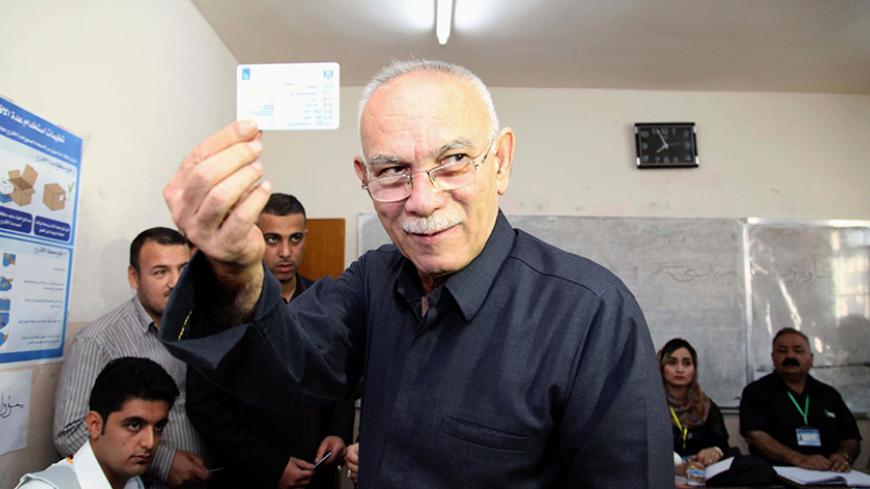 Nawshirwan Mustafa, leader of the Kurdish opposition movement Gorran, holds up his ID card during regional parliamentary elections in the northern Iraqi of province Sulaimaniyah April 30, 2014.

A deal between two main Iraqi Kurdish political parties, Gorran and the Patriotic Union of Kurdistan (PUK), is expected to increase tensions and lead to further fragmentation and destabilization of Iraqi Kurdistan’s political scene, at least in the short run, as it might trigger reactions from the major ruling Kurdistan Democratic Party (KDP).

The agreement signed May 17 by senior PUK and Gorran leaders in Sulaimaniyah comes after a year of political crisis in Iraqi Kurdistan sparked by unsuccessful Gorran-led attempts to unseat Massoud Barzani, the KDP leader and president of the autonomous region.

A governmental body known as the Kurdistan Consultative Council extended Barzani’s tenure in August 2015, a measure strongly protested by Gorran and a group of parliamentarians from different parties. As a result of mounting tensions and ensuing popular protests — which the KDP blamed on Gorran — KDP-affiliated security forces prevented Yusuf Mohammed Sadiq, the Gorran speaker of the Kurdish parliament, from entering Erbil on Oct. 12, 2015. The KDP also expelled Gorran ministers from the government without resorting to proper legal mechanisms.

Against this backdrop and a severe estrangement of Gorran’s ties with the KDP, the former has struck a deal with the PUK in an attempt to form a strong front to challenge and counter KDP’s domination over Iraqi Kurdistan government and politics.

“Naturally, the KDP will most definitely feel vulnerable and will resist most concessions if not all,” Mohammed Shareef, a Kurdish affairs’ analyst, told Al-Monitor.

The deal, which sounds more like a collaborative reform proposal, states that the PUK and Gorran blocs are committed to forming an alliance in parliamentary and provincial council bodies.

It also paves the way for the two groups to run on joint lists in future elections if they choose to do so.

The two parties have also agreed that the Kurdish parliament should reconvene “without any preconditions,” a call that appears to challenge Barzani’s KDP. The KDP has repeatedly said that it supports the parliament to convene but that Sadiq should be replaced.

“The KDP will not accept any preconditions,” Roj Nuri Shaways, a member of the KDP’s political bureau, told reporters in Erbil April 16, signaling his party’s refusal to accept PUK and Gorran attempts for the parliament to resume its work with its former leadership.

Over the past seven years, the PUK has suffered from a considerable loss of votes as the party’s former deputy head, Nawshirwan Mustafa, parted ways with PUK leader Jalal Talabani and established Gorran.

The relations between the PUK and Gorran have been marked by dramatic ups and downs, with the PUK at one point suppressing with a firm hand a popular protest movement in early 2011 encouraged by Gorran. In 2014, Gorran replaced the PUK as KDP’s primary partner in Kurdistan’s ruling coalition. But Gorran’s insistence on setting limits for Barzani’s term as the president of the Kurdistan Region and the expulsion of Gorran's ministers and parliament speaker last October brought to an end the uneasy alliance between the two sides.

When Gorran leader Mustafa, after about eight months of absence from Iraqi Kurdistan, returned home from London in late April, many wondered what the veteran politician would do to restore the party’s strength and credibility.

The deal with the PUK negotiated in just a month appears to be Mustafa’s response to the KDP and a tacit acknowledgment that Gorran's stated method of bringing about change on its own by relying on popular pressure has failed.

While saying the deal is meant to further democracy in Kurdistan and not aimed at undermining the KDP, Shorish Haji, Gorran’s official spokesman, told Al-Monitor that some degree of “confrontation and struggle will be inevitable.”

Haji said, “We had to find a solution between settling political struggles through fighting or — given that the parliament has been frozen — we had to reach out to other parties that share our worldview and work together to find a way."

Kurdish groups have a long history of armed internal struggle with the PUK and KDP fighting a civil war for four years in the mid-1990s. Subsequently, the Kurdistan Region has been divided into two zones, and despite a joint government, the KDP and the PUK each maintains influence over its territory.

Gorran was in the opposition until 2014 and has presented itself as an anti-establishment party attacking both the PUK and KDP over corruption, family rule and weak governance. It is not clear if Gorran will tone down its anti-establishment rhetoric, especially vis-a-vis the PUK, after this agreement. In addition, some have been asking if the former opposition group is heading toward more of a family-dominated structure, as Mustafa is often seen these days alongside his close relatives when receiving foreign diplomats and local politicians.

Gorran’s major base of power and activity has been in Sulaimaniyah province and areas dominated by the PUK, causing instability in those areas as it sought to take on the local PUK-dominated administrations.

“We needed to have an agreement and stabilize our bilateral relations [with Gorran],” Farid Asasard, a member of the PUK Leadership Council and one of the main drafters of the agreement, told Al-Monitor.

Asasard said that Iraqi Kurdistan suffered from an internal power imbalance, and that his party’s deal with Gorran will restore balance vis-a-vis the KDP and its perceived hegemony over the Kurdish region in the recent years.

“We believe that when you have one strong and weak side this will not lead to stability and peace. Stability will emerge only between two strong sides,” Asasard said.

The KDP’s less than excited reaction to the news of the Gorran-PUK deal comes at a very sensitive juncture for the party, as Barzani is positioning himself as the leader of a possible push toward statehood.

The PUK-Gorran deal stipulates the two parties’ commitment to hold a referendum on independence in Iraqi Kurdistan but says it has to be approved by the parliament. But given chronic power rivalries between the KDP, PUK and Gorran leaders, it is not yet clear how the three parties will manage to transcend their differences and work together on such a crucial matter for Iraqi Kurds.

The deal seems to be a bitter pill for the KDP to easily swallow.

“The content of the agreement shows there is some sort of preparation to create problems in [Iraqi] Kurdistan,” Saro Qadir, a former senior KDP official who is still considered close to the higher echelons of the party, told Al-Monitor.

The PUK-Gorran deal comes at the time of the centennial of the Sykes-Picot agreement signed by two British and French officials at the end of World War I. Following the agreement, large parts of the Kurdish homeland was divided among Iraq, Syria and Turkey.

With the rise of the Islamic State (IS), the weakening of the Iraqi government and the raging chaos in Syria, Kurds are closer than they have ever been in the last century to build their own state. While ideally the PUK-Gorran deal might pave the way for broader power-sharing with the KDP, in reality it might have the unintended consequence of setting the stage for years of intense rivalries and enhancing the lines separating KDP's zone of influence from that of the PUK and Gorran.

“Both the fragile security situation as a result of the war with IS and the dysfunctional economic reality [in Iraqi Kurdistan] render the situation far too profound and the whole Kurdish enterprise too vulnerable to allow for any irresponsible behavior to manifest itself in the further fragmentation of the Kurdish body politic,” Shareef said.