Former Iraqi Prime Minister Nouri al-Maliki visited Sulaimaniyah to welcome the coalition between the Patriotic Union of Kurdistan and the Movement for Change, deepening the dispute between Sulaimaniyah and Erbil. 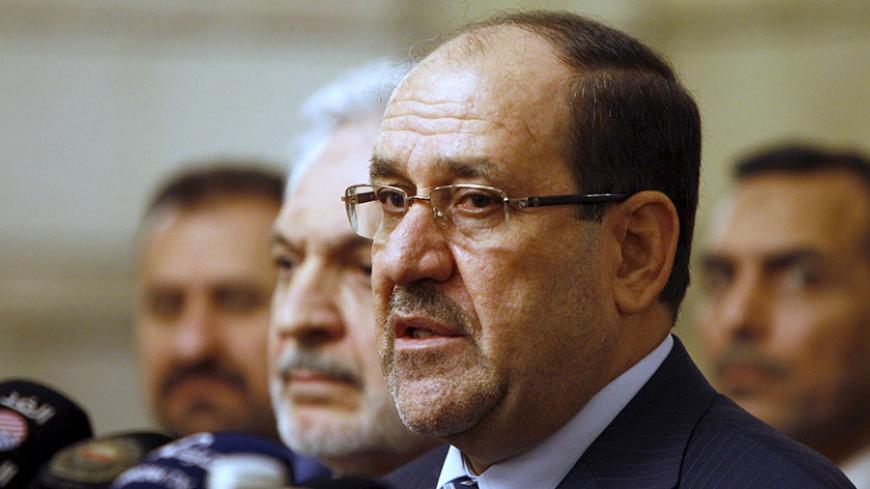 ERBIL, Iraq — Former Iraqi Prime Minister Nouri al-Maliki visited the city of Sulaimaniyah on July 18 for a meeting with the Patriotic Union of Kurdistan (PUK) and the Movement for Change (Gorran) in his capacity as the head of the State of Law Coalition and the secretary-general of the Dawa Party. The visit has raised much controversy as to whether it would further deepen internal political differences in the Kurdistan Region of Iraq.

Maliki visited the city to bless the recent alliance between the PUK and Gorran.

Upon his arrival in Sulaimaniyah, Maliki met with PUK Secretary-General Jalal Talabani and then visited the party's political bureau before heading to Gorran's offices.

The leaders of the Kurdistan Democratic Party (KDP) cautiously welcomed Maliki's visit, although there was some criticism that Maliki was not clear about his intentions. Nechirvan Idris Barzani, KDP deputy president and prime minister of the Kurdistan Regional Government (KRG), said his party would receive Maliki if he decided to visit Erbil. However, he had previously criticized the former prime minister, saying, "Had he had good intentions, he would have asked to visit Erbil as well, but we do not know what his intentions are."

This reflects KDP leaders' discomfort with this visit. There was explicit criticism from the chairman of the party council in Sulaimaniyah, Adham Barzani, who said, "I hope Maliki's visit will not adversely affect the latest initiatives of [KRG] President [Massoud] Barzani," in reference to the latter's call for a referendum on the independence of Kurdistan.

Adham Barzani made scathing comments against Maliki, accusing him of "denying people their livelihood and salaries," in reference to Maliki's cutting off salaries of KRG employees in the political row with the region when Maliki was prime minister. Adham Barzani is known for his strong stances against Baghdad and his full support for the secession of Kurdistan from Baghdad.

In the same vein, even some of the PUK leaders were also not very welcoming of Maliki given his previous stances vis-a-vis the KRG. PUK leader Mustafa Jawresh told the Rudaw news website that he "would not have received Maliki even had it been by PUK request." Jawresh added that Maliki's visit came only to deepen the rift and increase tensions because of his negative stances toward the Kurdish people.

Maliki's schedule called for a visit to Halabja province, but the trip was canceled suddenly with no reason given after the city's administration had taken the necessary measures and preparations for the appearance. Rudaw reported that the visit had been canceled following the outbreak of demonstrations by people refusing to receive him in the city. PUK sources did not confirm this, however.

Maliki's visit comes in light of the political and legal divide in Kurdistan between the KDP and Gorran. When the term of the KRG president came to an end in August 2015, Gorran abstained from extending Barzani's mandate.

When the KRG parliament failed to quickly reach a compromise on the issue, the Judicial Council extended Barzani's term for two years. On Oct. 12, KRG parliament Speaker Yusuf Mohammed Sadiq of Gorran was banned from entering Erbil, exacerbating the political tension.

In a statement to Al-Monitor, Adnan Othman, a journalist and a Gorran official, said, "Disputes revolve around the KRG's management and the KDP's insistence on not surrendering the presidency of the [Iraqi Kurdistan] region at the end of the president's term." He said Maliki's visit was not that big of an issue. "The deepening of already existing differences is not of great significance. We have already stood up to Maliki's face," Othman said.

Jabbar Qadir, a member of the Kurdish Academy, told Al-Monitor, "The dispute has political, economic, social and even regional dimensions and Maliki's visit adds fuel to the fire."

Adel Bakhwan, an expert in Kurdish affairs and researcher in the School for Advanced Studies in the Social Sciences in Paris, told Al-Monitor, "The differences between the two sides come within the framework of a string of failures over the past 25 years, of which one could mention the Kurdish parties' inability to create an independent political space, build a national army beyond the parties' influence, failure to strengthen the infrastructure of the national economy and [failure to address] sharp social disparity."

He said, "The split has been gradually deepening between the affluent minority at the summit of power and the poor majority of people. This is not to mention the diplomatic failure in managing these differences."

Bakhwan added, "Maliki's visit will further increase the tension between the two sides, as Kurds still remember that he was the one to cut off the livelihood of people in the region and threatened to use the military. This visit suggests that Kurds are ready to use whatever distasteful political card against each other."

In addition to the already existing differences, the gap is widening between the citizens in the region and the KRG institutions, given the government's poor management of public services and failure to pay the salaries of employees. According to a report by Radio Nawa, the estimated number of KRG employees in the region is 1.4 million and they are being paid only a quarter of their monthly salary.

In light of the lack of confidence between the two parties, it seems that the Kurdistan Region is divided into two separate regions of influence between the KDP and the PUK, where any action from Baghdad such as the Maliki visit can deepen the split.