Iraqi Kurdish political forces have recently increased their calls for a referendum on Kurdish independence, but Iran may try to prevent this from happening. 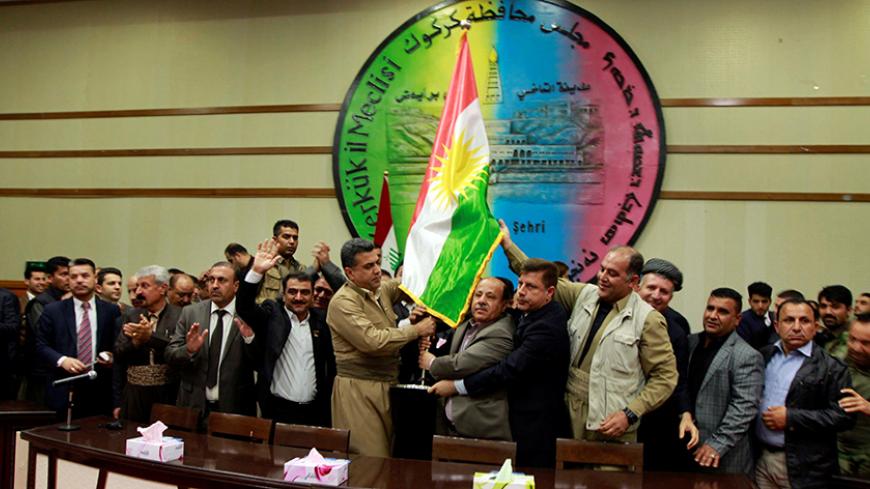 As talk of an independence referendum for Iraq's Kurdistan Regional Government (KRG) grows, Iran's role is becoming more visible, especially that of Qasem Soleimani, the powerful commander of the Islamic Revolutionary Guard Corps' Quds Force. But it appears that this role is retreating in the face of Kurdish ambitions for more independence.

Kurdish media outlets reported April 10 that Soleimani had met senior leaders of the Patriotic Union of Kurdistan (PUK) in Sulaimaniyah. Rudaw, a media organization aligned with the Kurdistan Democratic Party (KDP), reported April 11 that the goal of the visit was to prevent the KRG from holding an independence referendum.

But it appears that PUK officials were not the only parties to the meeting. Soleimani had discussed the poll with KRG President Massoud Barzani in Erbil. Soleimani is Iran's top official in Iraq, according to KRG Prime Minister Nechirvan Barzani. As such, he has had many relationships with Kurdish figures, especially in the PUK and the Kurdish Movement for Change (Gorran), since the 1990s.

Iraqi Kurdish political forces recently have increased their calls for a referendum on Kurdish independence. The leadership of the KDP has said such a poll will be held this year. The KDP and the PUK agreed to set up a joint panel April 2 to decide how the poll would be run and set a date for it.

Iran is against such a step and sees an independent KRG as a red line, something KDP Secretary-General Fadel Mirani dismissed on April 11, saying, "We don't need permission from anyone to hold a referendum." But it is impossible to ignore the clout of neighboring states opposed to Kurdish independence. Iran especially enjoys serious influence over the PUK and Gorran in Sulaimaniyah, which is close to the Iranian border.

Iran also has various means of affecting developments in Kurdistan. Economically, the Iranian border is a lifeline to the PUK and Gorran heartlands. The border is even more important in light of continuing intra-Kurdish disputes. Iran could economically strangle certain areas of the KRG. "Iran's strategy in Iraq is a policy of divide and rule," Joost Hiltermann, the program director for the Middle East and North Africa for the International Crisis Group, told Al-Monitor. "Kurdish society is very divided at the moment and Iran has a chance to exploit those divisions."

Iran would lose much of this leverage were Kurdish parties to put aside their differences, because there is major trading activity across the KRG's border with Turkey, which could serve the entire region from east to west. All this depends on the level of coordination between Iran and Turkey, which also opposes steps toward Kurdish independence in Iraq.

As the commander of an influential military force in the area, Soleimani plays a prominent role in Iran's security apparatus in the KRG. Iran has a major security presence throughout the region. There are also Iranian Kurdish opposition factions operating from Iraqi Kurdish territory that occasionally use it as a launchpad for attacks on Iranian soil. This has prompted Iran to beef up its presence in the KRG. David Pollock of the Washington Institute cited a Gorran movement official as saying that Iranian agents have 700 safe houses in Sulaimaniyah alone.

Hemn Seyedi, a former leading official in the Kurdistan Democratic Party-Iran, which is a splinter of the Kurdistan Democratic Party of Iran (KDPI), told Al-Monitor, "In the last two decades, Iran has carried out dozens of security operations on Iraqi Kurdish soil. It has assassinated dozens of Kurdish opposition activists and bombed KDPI bases during incursions on KRG territory."

In December, six members of the KDPI died in an explosion in a base in the KRG town of Koya. The party leadership accused Iran of carrying out the attack. Nechirvan Barzani did not rule out the possibility that Iran was behind it.

Soleimani may also use Iran's considerable diplomatic, economic and security apparatuses to prevent the region becoming independent. Kurdish studies specialist Kamran Matin of the University of Sussex told Al-Monitor that if there really was a referendum and Kurdish leaders took steps toward independence, it is possible that Soleimani would provoke the central government in Baghdad and Shiite militias against the KRG. "Iran could also take the presence of opposition Kurdish-Iranian forces in the region as a pretext for military intervention there," he said. "On the other hand, Iran could enter into an alliance with Turkey to put pressure on the region. Finally, the Iranian Revolutionary Guard could use extremist Sunni Kurdish groups against the regional government, as it did early 2000s, when it it supported the Ansar al-Islam group in order to win political concessions from the region."

But Hiltermann said it is unlikely Iran would take such measures in the near future. "I don't think Iran is very worried, given that it is only a referendum and it will not receive much international support at this stage," he said.

Despite Iran's leverage in the region and Soleimani's moves to prevent the region from gaining more independence, the region has won major privileges in recent years thanks to support from the United States.