The post-election politics of the Kurdistan Region of Iraq is subject to relationships among Iran, Iraq and Turkey. 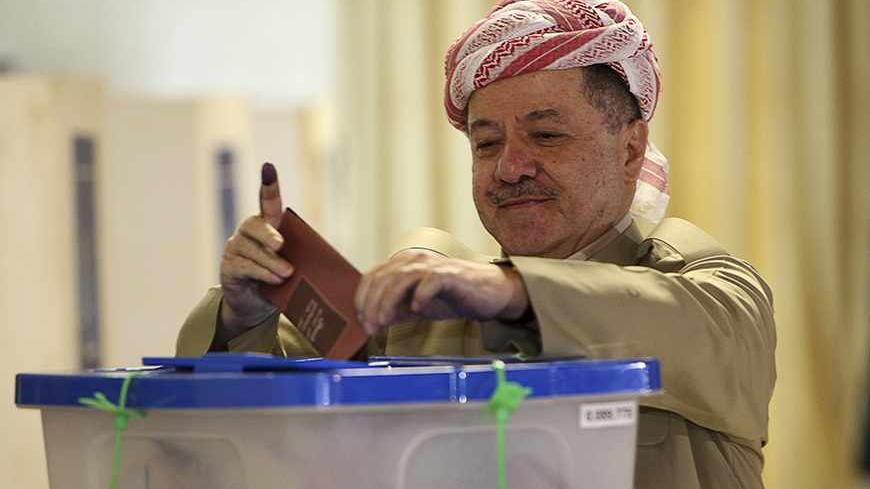 The Kurdistan Regional Government's (KRG) new cabinet will not solely be determined by the political victors of the Sept. 21 regional elections; Turkey and Iran —the two rival regional powers — continue to exert pressure on this process to protect their interests and allies in the next government.

Both visits were attributed to the weakened post-election position of Iran's main ally in the Kurdistan Region of Iraq, the Patriotic Union of Kurdistan (PUK), which is led by ailing Iraqi President Jalal Talabani. Additionally, Barham Salih, Talabani's deputy in the PUK, has been officially invited to Iran to discuss with Iranian officials the new cabinet’s formation, according to Iran's consul in Erbil, Seyid Ezim Husseini.

Criticizing Barzani’s increasing dependence on Turkey, a Kurdish political analyst wrote, “Turkish treatment of the KRG is the same [manner of treatment] by Ottoman sultans with walis [regional governors] under their control. Over few months, the wali of the KRG was called to pay a visit  to Turkey so as to be given instructions on what to do and what not to do."

Interestingly, in the Kurdistan Region's Sept. 21 legislative elections, none of the political parties scored a landslide victory that would allow them to form a new cabinet unilaterally. Of the 111 parliamentary seats, the Kurdistan Democratic Party (KDP), led by KRG President Massoud Barzani, secured 38 seats; the Gorran Movement, led by Nawshirwan Mustafa, won 24 seats; Talabani's PUK, 18 seats; the Islamic Union, 10 seats; and the Islamic Group six seats. The election reshaped the political order, as Gorran became the second-leading party following a substantial decline of the PUK’s clout.

Lately, both the KDP and PUK have grown more dependent on Turkey and Iran rather than the United States — something made clear in the two parties’ media discourses. The KDP media outlets, especially those sponsored by Nechirvan Barzani, celebrate Turkey's presence in the region while PUK leaders approach Iran more. Adel Murad, secretary of the PUK central assembly, recently commented on the PUK's dependence on Iran to secure its positions in Baghdad's majority Shiite government.

Awene, an independent weekly newspaper in the KRG, reported that Iran wants the PUK to participate in the new cabinet. Iran does not consider the KDP a close ally because of its strong ties with Turkey. Moreover, the election success of the Gorran Movement has reinforced Iranian concerns about losing influence in the KRG; they do not trust the Gorran movement, whose new leadership supports balanced relations and neutrality in regional conflicts.

Despite these concerns, Iran wants the movement to be included in the new government because their involvement will be important to regional stability. A Kurdish leader, speaking anonymously to Asharq Al Awsat, said Iran wants the Gorran Movement to have an active role in order to maintain stability and reduce Massoud Barzani's power over the region.

The newspaper also reported that the US government is worried about the increasing influence of Iran and Turkey in the region. Due to this, the United States is seeking to build a large consulate in Iraqi Kurdistan strengthen its influence.

Regional dynamics will be influenced by the broader context of Iraq’s relations with Turkey and Iran. If the tensions between Iraqi Prime Minister Nouri al-Maliki and Turkey are not resolved — in particular if Turkey's wishes are not met by Maliki — Turkey will try to bring Sunnis and the KDP together to confront him. The PUK is not strong enough to resist the KDP's wishes if Barzani wants to join a Sunni-Kurdish coalition. Even so, Iran will do its best to not allow the PUK to join such a coalition. In the absence of Talabani, the PUK has been divided into three major wings, therefore internal conflicts may not permit the party to come to an independent decision.

The strong ties between the KDP and Turkey, and the PUK and Iran, have divided KRG policy into different axes. The Gorran Movement has yet to back any regional force, but since they are in the KRG, they will either be drawn closer to Iran or Turkey in order to secure competitive leverage. Interestingly, Gorran Movement head Mustafa has already paid a visit to Iran, but there have been no subsequent developments between the two sides. On the Turkish side, Gorran has already started engaging in diplomatic activities with Turkey. Their representatives are seen in Turkey regularly, and Gorran has blamed Turkey for turning its relations with the KRG into relations between just Turkey and the KDP.

All in all, the cabinet has not been formed, but the shadow of Iran and Turkey is obvious. To exclude or to include the opposition parties is not a decision that can be finalized in the KRG alone. One of the opposition demands to participate in the cabinet is to institutionalize regional and foreign relations, but it is not clear if this demand will be met in the end.