Iraqi Kurds stuck between Iran, US

The Iraqi Kurds are worried about the US-Iran rivalry in Iraq, as it will weaken their position in the country more than ever before. 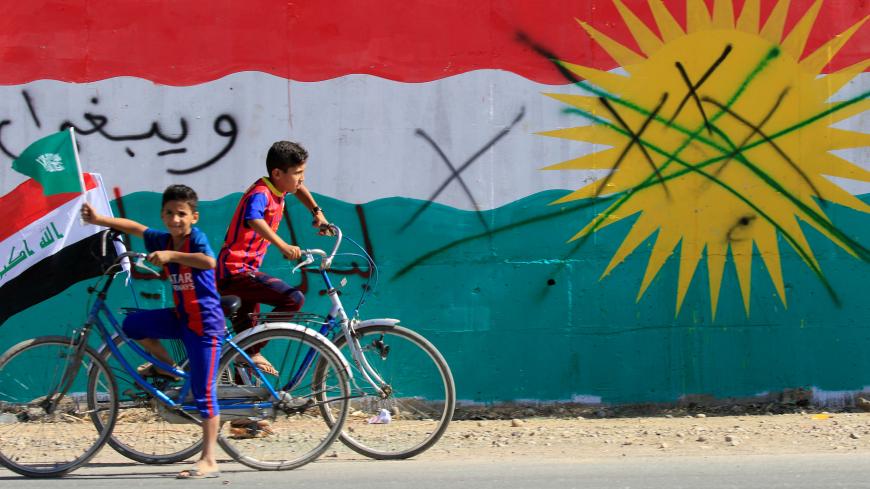 A boy rides a bicycle with an Iraqi flag in Dibis area on the outskirts of Kirkuk, Iraq, Oct. 17, 2017. - REUTERS/Alaa Al-Marjani

The United States' economic and diplomatic pressure on Iran is expected to reach its crescendo in early November with the imposition of oil and gas sanctions. The Iraqi Kurds who were punished by Tehran and snubbed by Washington last year following their ill-conceived referendum for independence are under extensive pressure to choose a side in this international affray.

“The Kurdish parties are not united and therefore they cannot avoid getting pulled into this rivalry. They will be hit by some sparks from the fire,” Ahmad Haji Rashid, a veteran Kurdish lawmaker in the Iraqi parliament, told Al-Monitor. “What is happening right now in Iraq is a clear war between Iran and America.”

The Kurds who lost much of their influence in Baghdad over misreading international support for their independence referendum last autumn are again struggling in between the pro-Iran and pro-American camps in Baghdad. Haji Rashid, nominated by his party for the position of the second deputy parliamentary speaker, has come under extreme pressure from the head of the pro-Iran Fatah Alliance, Hadi al-Amiri, to withdraw his candidacy in favor of another candidate. Haji Rashid even implied that financial incentives were offered to him to withdraw, but he refused.

Jamal Kocher, a popular and experienced Kurdish politician from the Kurdistan Islamic Union, believes that the Iraqis and the Kurds have little power over their fate in the face of Iranian and American interests. "Who appoints the prime minister of Iraq?” Kocher quipped to Al-Monitor on Sept. 13 in Dahuk before proceeding to answer the question. “Qasim Soleimani comes and gathers the parties from all sides and appoints a government, just like that. Then the American Qasim Soleimani — I mean Brett McGurk — comes and sits down with the Kurds and Iraqis and says that we need to do this and that. Then [Prime Minister Haider al-] Abadi parrots the same line on TV.”

This is significant coming from Kocher because he is seen as a measured and experienced politician who has dealt with Iraqi and Kurdish parties for years.

Other Kurdish politicians concede that the Americans and the Iranians have made life impossible for the Kurds, leaving them in a limbo unable to decide what to do. "These days the Kurdish side is under extensive pressure from Iran and the United States, which has clearly weakened the will of the Kurds to make up their mind,” wrote Farhad Abdulaziz Aladdain, an adviser to Iraqi-Kurdish President Fuad Masum. “The Kurds have decided [under these pressures] not to join any of the two main blocs … but continuing this position may be detrimental to the Kurds’ interests in the end.”

While the Kurdistan Democratic Party (KDP) and the Patriotic Union of Kurdistan (PUK) have realized they need unity among the Kurdish parties if they want to have influence in Baghdad, the fissures in Kurdish politics run so deep that it is almost impossible to create unity among the Kurds. Moreover, the chances of creating a united front is slipping away as the campaigning for the regional elections set for Sept. 30 is getting underway across the three provinces of the Kurdistan Region. If the previous campaigns are anything to go by, the Kurdish parties will not shy away from employing any underhand methods and propaganda to weaken their opponents, which ultimately undermines Kurdish unity in Baghdad.

Meanwhile, as the pressure from the Trump administration mounts, Iran wants true allies in Iraq in positions of power. In that vein, Iran is working hard in Baghdad and the Kurdistan Region to strengthen its position by helping its allies to overcome their differences. Iran, which sees the PUK as a loyal ally in Iraqi Kurdistan, is pushing to strengthen the PUK under one strong leadership from the Talabani family. Iran whose wishes come in the form of recommendations rather than orders, prefers former Iraqi Deputy Prime Minister Barham Salih to reach an agreement with the PUK following his split last year. Iran appears to have realized that succumbing to the PUK and the KDP pressure in 2014 in support of a meek individual as president of Iraq did not pay off for Tehran. While Iran has arguably become a force for instability, Tehran is interested in stability in Iraq so long as the odds are stacked in its favor.

Whereas the late Jalal Talabani turned the presidency — a ceremonial position — into a powerful office to determine and resolve the sectarian and political differences of Iraqi political factions, the current president has turned the presidency into a truly ceremonial office. For that reason, Iran seems to have accepted Salih, a student of Talabani’s school of dialogue and diplomacy, to the presidency despite Salih having cordial relations with the Americans. This could be a silver lining in the whole Iran-US saga in Iraq, perhaps a veiled message from the Iranians that despite the saber rattling of the Islamic Revolutionary Guard Corps, they want to have an interlocutor, a channel of communication, with the Americans in Baghdad, similar to the role Talabani played between Iran and the Americans from 2003 until he fell ill in late 2012.

The economies of Iraq and the Kurdistan Region are so intertwined with Iran it would make it very difficult for the Kurds to survive if the United States zeros in on them to stop trading with Tehran once the sanctions are fully in place, unless Washington offers an alternative. “It will have a direct economic impact on Iraq and Kurdistan because our economy is linked to Iran,” said Haji Rashid.

The two-term parliamentarian Kocher believes that the American strategy in Iraq is confused even as Iran strengthens its hands. “The Americans are controlling the sky [of Iraq] while on the ground it is the Iranians who rule. … The Kurds can’t decide right now because America has not made up its mind,” Kocher said. “Does Iraq favor the United States or Iran?”

The Kurds are stuck between a rock and a hard place. The Iranians have been loyal allies for the Iraqi Kurds for decades, while America is vital for the survival of the limited authority the PUK and the KDP have in their semi-autonomous region. “Perhaps the only wise thing the Kurdish leadership has done recently is to say that they would follow Baghdad regarding Iran’s sanctions,” Kocher noted.