Iran steps up pressure on Iraqi Kurds to halt referendum

Iran is stepping up pressure on Iraqi Kurdish political parties to refrain from holding their upcoming referendum on independence. 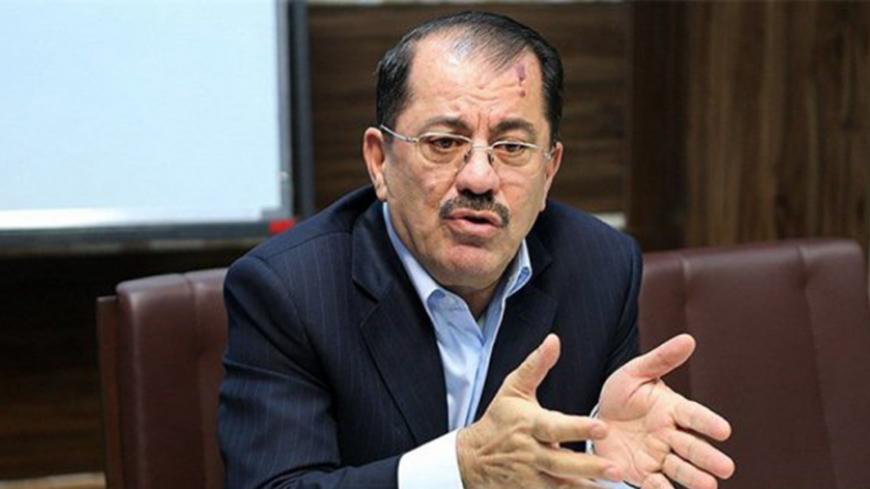 Iran and the Kurdistan Regional Government (KRG) have become entangled in a war of words as the referendum on Iraqi Kurdistan’s independence nears. Both sides are now making veiled threats, which — if they materialize — could have serious consequences on stability in the region.

The Iranians, whether under the shah or the Islamic Republic, have worked hand in glove with the Kurds to undermine the Iraqi central government’s authority and thus should not be expected to be adamant about preserving the authority of the state at any cost.

Yet, according to Nazim Dabagh, the KRG representative in Iran, the situation right now is tense. Dabagh, who accompanied a delegation from his party, the Patriotic Union of Kurdistan (PUK), in meetings July 17 with Iranian officials, told Al-Monitor, “The Iranians say, 'We are for the territorial integrity of Iraq and we will do everything to preserve it.'" Dabagh is well-versed in Iranian politics, having served as a Kurdish representative in Tehran for most of the last four decades. "I personally think that holding the referendum without the approval of Baghdad and the neighboring countries, without a doubt, will cause problems." When pushed on what kind of problems Iran could cause, Dabagh — who was speaking via telephone from Tehran — did not elaborate.

Another source familiar with the content of the PUK meetings in Tehran who does not want to be identified told Al-Monitor that the Iranians were angry about the referendum and reminded the Kurds about their deep mutual ties and how Iran had assisted the Kurds at critical junctures since 1975, and in recent years, having been the first country to shore up their defenses against the Islamic State in August 2014. “As long as you halt the referendum, we will do everything for you within Iraq; we’ll help you implement Article 140 [of the Iraqi Constitution on disputed territories and Kirkuk] and press Baghdad to reinstate your share of the [Iraqi central government’s] budget," said a top Iranian official according to the source familiar with the meetings. "However, if you go ahead with the referendum, we will do whatever necessary to stop it — things that you cannot even imagine," warned the Iranian official, reportedly dressing down the PUK delegation.

Iranian officials in Tehran were more measured in their public statements but to the point nonetheless. Ali Shamkhani, secretary of the Supreme National Security Council, warned the same day he met with the PUK delegation that a referendum for independence is a plot of some countries to sow division in Iraq. "The referendum will isolate and increase pressure on the Kurds of Iraq, and it undermines Kurdistan and eventually the whole of Iraq." The same day, Maj. Gen. Mohammad Bagheri, chief of staff of Iran's armed forces, said, "This subject [Kurdistan referendum] is not acceptable to Iraq’s neighbors at all; preserving the independence and territorial integrity of Iraq is in the interest of all ethnic [and] religious groups.”

However, in its meetings in Tehran, the PUK delegation maintained that the decision to hold the referendum was collective and made by Kurdish parties, but assured the Iranians that they will relay Tehran’s message to other parties. On July 30, during the second meeting of the Kurdistan referendum committee, the PUK delivered the message of opposition from Tehran. The response from the main party driving the vote, the Kurdistan Democratic Party (KDP), was clear.

"We will not delay it [the referendum] by one minute or bring it forward by one hour; at 8 a.m. Sept. 25, people will cast their votes," KDP leader and de facto KRG President Massoud Barzani told the committee members. It appears that Barzani, whose term as president of Iraqi Kurdistan expired two years ago, is trying hard to resolve the internal Kurdish disputes while simultaneously sending strong messages to the countries that appear opposed to the referendum. In the July 30 meeting, Barzani dropped his opposition to the reactivation of the parliament and even agreed to discuss the controversial issue of the presidency, which has been at the center of the dispute between his party and the Change Movement (Gorran), whose ministers the KDP-led government fired in October 2015. It is not clear if Barzani will succeed in convincing the Change Movement to back the referendum given the deep animosity that exists between the two parties.

Iran may be counting on the PUK, with which it shares strong and longstanding ties. But If the Change Movement agrees to back the referendum, this will put the PUK in a difficult position. To avoid political suicide, such a scenario will leave it with no choice but to back the process. Indeed, KDP-affiliated media outlets are already labeling whoever opposes the vote a “traitor.” It appears unlikely that Tehran would be unaware of this dynamic and the impact it could have on its closest ally in Iraqi Kurdistan.

In the meantime, with the referendum drawing near and a delay unlikely to materialize, tensions are expected to mount. “This is our right and we will defend this right. … When Kurdistan becomes independent, if there were to be an attack … we would give our blood to defend it. … We hope these [neighbouring] countries do not oppose the wishes of the Kurdish people,” Adham Barzani — a senior figure within the KDP and a cousin of Massoud Barzani — told Kurdistan24 on July 23.

Nonetheless, Iran should be expected to continue its unrelenting pressure on the Kurds to halt the referendum, partly worried about the impact an independent Kurdish state in northern Iraq would have on its own 8-million-strong Kurdish community, which fought a bloody battle for independence in the 1980s. In this vein, a delegation from the Islamic Revolutionary Guard Corps Quds Force arrived in Iraqi Kurdistan secretly July 30 and met with all parties over three days, including Massoud Barzani, Prime Minister Nechirvan Barzani and top PUK officials. One source who is intimately aware of the content of one of the meetings told Al-Monitor that the Iranian delegation once again expressed opposition to the referendum. However, the source added that the Iranians also insisted that in the case of cancellation or postponement of the vote, Massoud Barzani should not lose face.