Iraqi Kurds maneuver to get closer to Iran

Following the rupture caused by the Sept. 25 independence referendum, the Kurdistan Regional Government and Iran are moving to bolster ties. 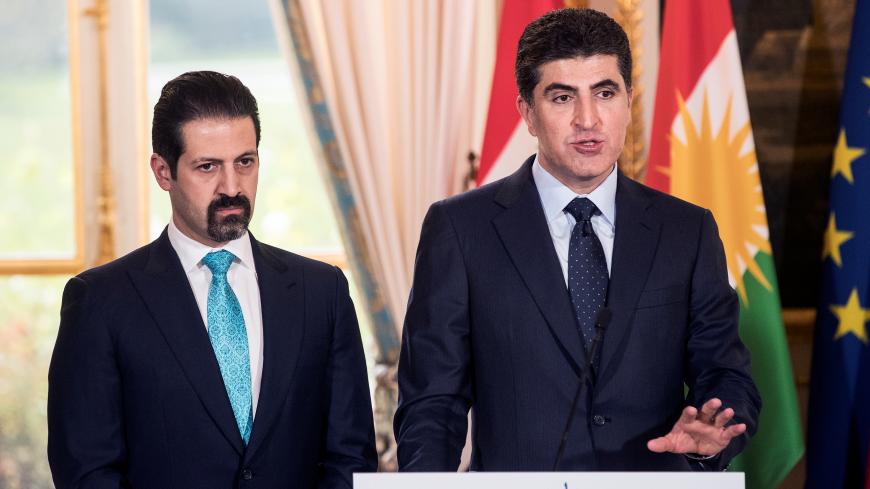 Iraqi Kurds have given reassurances to Tehran that they will not allow Kurdish opposition groups to launch cross-border attacks from Iraqi Kurdistan, a major development in the warming up of relations between Erbil and Tehran. This comes as ties reached a breaking point following the controversial Sept. 25 independence referendum in Iraqi Kurdistan.

“We cannot tolerate the fact that some counter-revolutionary groups use the Kurdish lands to kill our soldiers and citizens, [then] return to the areas under the [Kurdistan Regional Government's (KRG)] control and claim responsibility with audacity in interviews with the official Kurdish media,” Ali Shamkhani, the secretary of Iran’s Supreme National Security Council, reportedly told a Kurdish delegation headed by KRG Prime Minister Nechirvan Barzani on Jan. 21.

The KRG came under a crippling economic blockade and political pressure following the September referendum, with KRG officials now trying to repair relations with Baghdad and neighboring countries — including Iran, a key player with a long land border with the Kurdistan Region and enormous clout in Baghdad.

Both the Iraqi Kurds and Iranians have described the meetings in Tehran as positive and a step in the right direction of accepting the KRG once again as a responsible partner in the region. Al-Monitor has learned that the delegation headed by Barzani explained to the Iranians in clear terms that their overreliance on Turkey and the West — including the Americans — in recent years was misplaced and that they will from now on readjust their policies to reflect the position of Iran in Iraq and in the region.

Prior to the Sept. 25 plebiscite, Iran warned all the Kurdish parties about holding the referendum; when its warnings fell on deaf ears, Tehran did everything in its power directly and through its proxies to bring the Kurds to their knees. It closed off all land border crossings — a vital lifeline for the KRG — and helped the Iraqis retake most of the disputed territories from the Kurds, including Kirkuk, which contributed around 300,000 barrels per day to the KRG oil output, nearly half of the total Kurdish government revenue.

Iran is said to be highly concerned about the security of its western border with Iraqi Kurdistan and the activities of some hostile countries and their intelligence agencies in the region. Iran has had an uneasy relationship with the main ruling parties in the Kurdistan Region over the security of the border areas since the Kurds obtained their de facto autonomy in 1992. Several Iranian Kurdish opposition groups with thousands of peshmerga forces have been based in the region over past decades. Iran sees these groups as a security threat and has tried to neutralize them through assassinations, cross-border raids and security agreements with the two ruling parties in the Kurdistan Region — the Kurdistan Democratic Party (KDP) and Patriotic Union of Kurdistan (PUK).

The KDP and the PUK have found it difficult to strike a balance between adhering to Kurdish nationalism by supporting Iranian Kurdish groups in pursuit of their aims in Iran and maintaining cordial and neighborly relations with the government in Tehran. Iranian Kurdish groups have launched a number of cross-border raids in recent years, killing a number of members of the Islamic Revolutionary Guard Corps and border guards. Iran has often responded by shelling the border areas inside Iraqi Kurdistan, causing fear among villagers.

But given the dire economic situation in Iraqi Kurdistan, which has brought the KRG to the edge of bankruptcy, the Iraqi Kurds appear to have no options but to concede to Iran on the issue of security of the border areas, which Shamkhani described as a “red line for the Islamic Republic of Iran.”

“In every meeting we have with the Iranians, they emphasize security,” KRG representative to Tehran Nazim Dabagh, who accompanied the Barzani-led delegation, told Rudaw on Jan. 23. “This [trip] was an important step in opening a door that was shut before, and from now on, maintaining [this relationship] depends first on the KRG and second on Iran. … The security of the border area should be maintained.”

Dabagh, who has decades of experience as the Iraqi Kurdish representative in Tehran, said that the Kurdish delegation gave "reassurances" to their Iranian hosts that they will abide by international law in maintaining security in the border areas and respect the Iraqi Constitution and territorial integrity of the country. “In return, Iran has given all assurances that it will help in reaching an agreement with Baghdad in the short term,” Dabagh added.

But while Erbil and Tehran appear to have agreed to maintain security in the border areas based on previous security agreements, the implementation of this depends on the reaction of the Iranian Kurdish parties based in Iraqi Kurdistan.

One day before the KRG delegation headed to Tehran for talks, the five main Iranian Kurdish parties along with armed peshmerga forces came together and established a “coordination center” to channel their efforts against Iran.

“There was intense discussion over the principles of participating in the center; the main points were the belief in the toppling of the Islamic Republic, [and the creation of] a democratic, federal and secular Iran … where the rights of the Kurdish nation are taken into account,” a statement on Komala website, one of the main opposition groups, read. Al-Monitor’s calls to the KRG spokesperson for comment on this development went unanswered.

Mustafa Hijri, the secretary-general of the Democratic Party of Iranian Kurdistan (KDPI) — the main Iranian Kurdish opposition group — believes that the recent understanding between Iran and the KRG on the issue of security of the border areas is nothing new and, given the porous nature of the Kurdish highlands, it would be difficult to seal off the border completely.

“No aspects of our struggle will be compromised as a result of these kinds of agreements,” Hijri told Al-Monitor via a spokesperson. “We will find appropriate avenues to carry on our struggle in Rojhelat, and we will persevere,” he said, referring to the Kurdish region in Iran by its Kurdish name.

”Our activities … inside the country [Iran] consist of mainly grassroots work, but if necessary we will carry out armed activities to protect or support our grassroots units.”