By rectifying his statement on supporting US sanctions against Iran, Iraqi Prime Minister Haider al-Abadi is balancing between the United States and Iran in Iraq to keep both sides as his supportive allies. 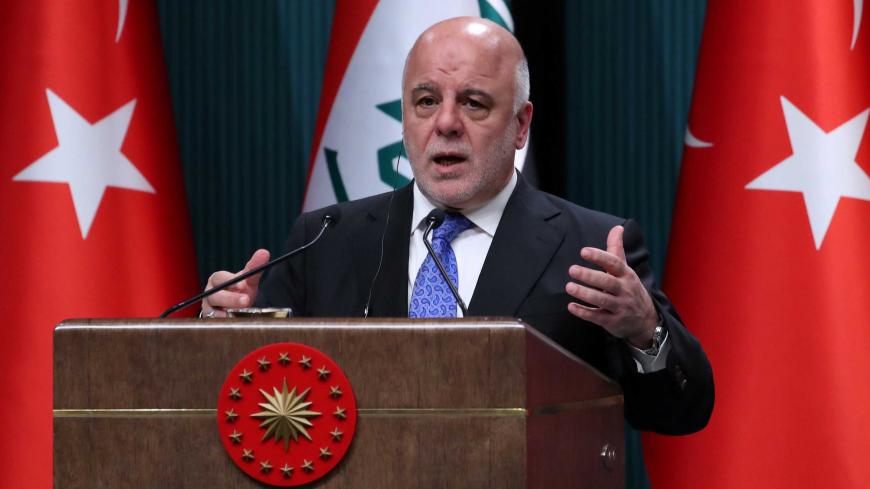 Ever since US sanctions on Iran were reactivated on Aug. 7, Iraqi Prime Minister Haider al-Abadi has been struggling to balance Iraq's relations between the United States and Iran so as not to lose either of them as a supportive ally.

Abadi's statement Aug. 7 that Iraq will abide by US sanctions triggered Iran's anger; many pro-Iranian parties and militias slammed him and requested that he retreat from his position. Likewise, Iranian officials criticized him and asked Iraq to pay war compensation to Iran for eight years of fighting in the 1980-1988 Iran-Iraq War if it is going to support US sanctions on Iran.

After the backlash against him, Abadi finally clarified on Aug. 13 his previous statement, saying that he plans to only abide by part of the sanctions but not all of them. "Iraq will not use the dollar in its trade with Iran," Abadi said, adding that Iraq will trade with Iran using other currencies.

A day after Abadi’s clarification, the US State Department reacted to his new position. In a press conference Aug. 14, State Department Spokesperson Heather Nauert was asked what the US response was to Abadi's position. “You know our concerns about Iran and about trading with Iran, and we will continue to hold countries accountable for any violation of sanctions,” Nauert replied.

Abadi’s change of position clearly shows that he was under a great deal of pressure from Iran. Iranian news agency Mashregh News, which is associated with the Islamic Revolutionary Guard Corps, quoted Iraqi officials and experts as saying that Abadi’s initial position in regards to abiding by US sanctions was made to satisfy the United States in order to guaranty himself a second term. In reality, he actually lost this chance, as the leaders of his party, Islamic Dawa, are now discussing his removal from the party.

A senior source within Abadi's office told Al-Monitor on condition of anonymity that the discussions about sacking him from Islamic Dawa are a warning signal from Iran that the latter will push its allies in Iraq to replace him in the upcoming government. The source added that Abadi’s new position was meant to address this issue in a way that calms Iran’s ire but does not trigger US anger.

Regardless, Iran has enough influence to replace Abadi with other candidates. The Fatah Alliance, the second biggest winner in the May parliamentary elections — is completely pro-Iranian, as are some other Shiite parties such as the State of Law Coalition, which already criticized Abadi for his support for the United States and expressed its support for Iran. The representative of the Kurdistan Regional Government in Iran, Nazem Dabbagh, also slammed Abadi for his commitment to US sanctions, calling his statement a rash decision that should never have been spoken. He also expressed Erbil support to Iran and said that “Kurdistan will continue trading with Iran.”

Washington understands Abadi’s difficult situation more than anyone else and does not want to lose him as a close ally, but a pro-Iranian prime minister in office would weaken the US position in Iraq. Therefore, the US Embassy released a statement Aug. 15 confirming that Iraq has not violated US sanctions and Spokesperson Nauert's statement was not about Iraq specifically, so Iraq will not be subjected to US sanctions.

Abadi is also facing a difficult situation balancing between Turkey and Washington, whose differences have recently escalated.

in his joint press conference with Turkish President Recep Tayyip Erdogan on Aug. 14, Abadi said that Iraqi government supports Turkey in its economic crisis that has resulted from US sanctions imposed on Turkey, pointing out that his visit to Turkey was to strengthen cooperation between the two countries.

Iran and Turkey are working on using their local currencies in trading instead of US dollars to reduce the effects of sanctions on their economies. As Iraq's economy desperately needs Iranian and Turkish goods, Iraq is likely to join this trend of using its neighbors’ currencies or other currencies rather than US dollars in its trade with them.

In this situation, US sanctions will bring Iran and Turkey closer in Iraq and provide an opportunity for Abadi to gain their support for a second term after he already gained the US support for the same matter.