Iraq is willing to abide by US sanctions against Iran, according to Prime Minister Haider al-Abadi, yet pro-Iranian parties and militias slammed Abadi, calling for support for Iran against these sanctions. 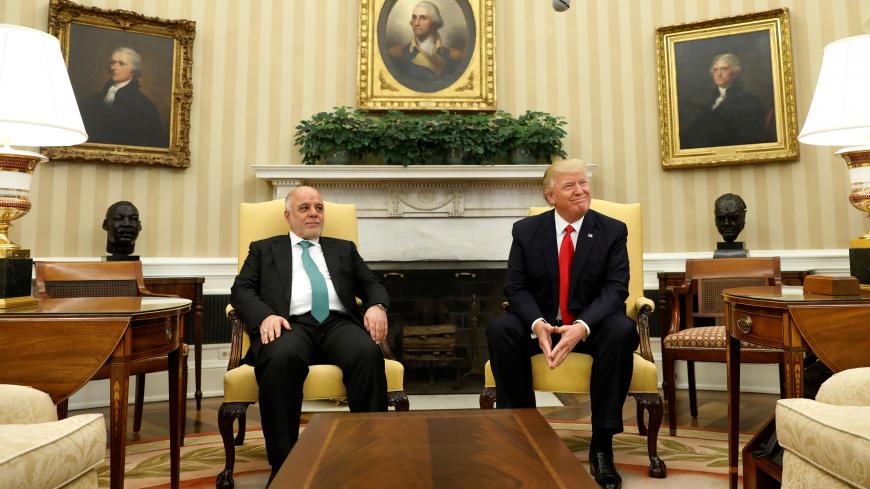 Ever since the first round of US sanctions on Iran went into force on Aug. 7, there has been no shortage of contradicting statements from Iraqi officials in local media outlets. Parties and militias have proclaimed their willingness to respect the sanctions at times; at other times, they have taken a condemning stance or expressed their dissatisfaction. This puzzling landscape reflects the Iraqi government’s confusion and inadequacy to take an independent and strong stand in a country that has long been the site of a power struggle between the United States and Iran.

One day before the sanctions began, Iraqi President Fuad Masum said in an interview with Alhurra TV channel, “The situation in Iraq and the nature of our relations with Iran makes it difficult for Iraq to comply with the sanctions imposed by Washington on Tehran.” Masum proceeded to stress again how difficult it is to implement those sanctions in conflicting phrasing.

Despite Masum’s confusing response, Prime Minister Haider al-Abadi seemed to have a more transparent stance on the sanctions when asked in his weekly press conference on Aug 8. “As a matter of principle we are against sanctions in the region,” he said, before recalling the harsh international sanctions enforced on Iraq in the early 1990s following the regime’s invasion of Kuwait. Abadi asserted that while Iraq “will abide by them to protect the interests of our people," he stressed that Baghdad won’t "interact with [the sanctions] or support them."

Just hours before Abadi’s press conference, Kurdistan Regional Government Prime Minister Nechirvan Barzani said in his weekly press conference, “The region’s stance on the US sanctions against Iran will be along the lines of Iraq’s,” implying that he is yet to receive any instructions about dealing with the sanctions. This contradicting rhetoric indicates that the sanctions in question have never been seriously discussed within the Iraqi government, and no instructions have been given about them.

The fluctuating official Iraqi position has been met with an uproar from the political parties and armed Shiite militias close to Iran. Not only have they expressed their dissatisfaction over the sanctions, but they have also slammed the prime minister’s complying position.

The question remains, however, how will Iraq deal with those sanctions? What actions are to be taken by the government? Is there a practical plan in the works detailing Iraq’s supposed compliance with the sanctions, and how would the country keep itself out of harm’s way considering that Iraq relies heavily on Iranian products and is currently engaged in electricity, gas and oil contracts with Tehran? It seems that Iraq has no answer to those questions, as Al-Monitor received no responses after contacting advisers and individuals with close ties to the prime minister. Apparently, everyone is avoiding speaking to the media in light of the heated outcry against the prime minister by the pro-Iran groups and militias over his statements on compliance.

Saad al-Hadithi, an Iraqi government spokesman, tried to alleviate the enraged response by underplaying the impact those sanctions would have on Iraq in statements he made to al-Masalah news agency. “The sanctions are limited to a specific issue that has something to do with banking transactions and money transfers,” he revealed. “The other matters are of no concern to Iraq. As such, the Iraqi government will abide by the part [of sanctions] regarding transactions and money transfers in US dollars with Iran. Other than that, Iraq won’t have any problems.”

Nonetheless, things are pointing in the other direction, that Iraq will take the quickest and heaviest damage in the wake of the US sanctions on Iran in light of strong trade ties between Iraq and Iran that exceed $12 billion annually, not to mention the important economic partnerships between Iraq and Iran in the sectors of electricity, gas and oil, which might crumble if Iraq complies with the US sanctions. All of these trades, needless to say, involve banking transactions and money transfers, which Hadithi referred to in his statements.

Still, Madhar Mohammad Saleh, an economic adviser to Abadi, revealed on Aug. 9 that some diplomatic efforts have been made to spare Iraq fallout by the way of legal workarounds to maintain Iraq’s broad ties with Iran without running the risk of violating the sanctions, even though Saleh came short of detailing how that could be accomplished. However, past experiences show that Iraq might take alternative routes for money transfers without the use of the dollar currency, such as directly exchanging goods or moving Iranian goods to global markets through Iraqi corporations.

In turn, Nabil Jafar, who teaches economics at the University of Basra, stressed, “Iraq has no choice but to comply with the rounds of US sanctions on Iran because it is directly connected to exporting oil, namely the primary export of Iraq,” adding, when “the second round of sanctions comes in November, Iraq might be denied exporting its oil if they took a stance against complying with the sanctions on Iran.”

Jafar acknowledged that implementing those sanctions will have a toll on the Iraqi economy. “The Iranian gas import will stop, which means that some power stations will be out of commission, effectively complicating the electricity crisis,” Jafar said. However, he showed some optimism, adding, “The Iraqi industries might see a much-needed rise in order to make up for the shortage of imported goods from Iran.”

In reality, Iraq is facing an impossible dilemma. Even if a new, Iran-friendly government comes to power, siding with Iran against implementing the sanctions might still be the grimmer option, an outcome Iraq certainly can’t afford in light of a complicated domestic landscape and a popular unrest that stem from the lack of services and overwhelming corruption.