Tensions between Baghdad and Tehran grow after Iraq's prime minister said his country would abide by US sanctions against Iran, while the latter demands compensation for damages in the 1980-88 Iran-Iraq War. 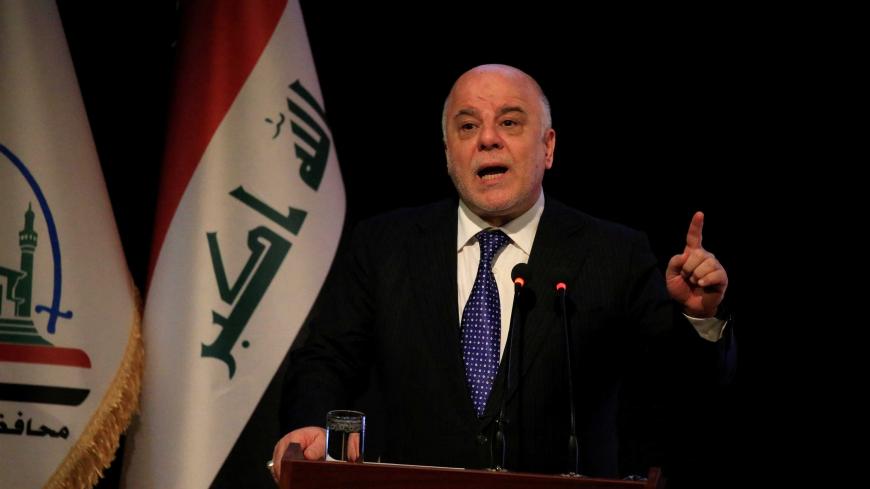 Iraqi Prime Minister Haider al-Abadi said Aug. 7 that Iraq will abide by US sanctions on Iran to protect Iraq's own interests. Abadi spokesman Saad al-Hadithi confirmed Aug. 13 that Iraq will not violate US sanctions on Iran and that “Iraq's stance toward the US sanctions imposed on Iran stems from the general interest of Iraq, and was not impetuous or hasty, but was subjected to study, and was not affected by the positions of other states or political parties.”

After Iraq said it would abide by US sanctions, several Iranian officials raised their voices against Iraq, calling it traitorous and demanding the country pay compensation for damages caused in the 1980-88 Iran-Iraq War that took place under Iraqi President Saddam Hussein, who was executed in 2006.

The controversy over Iraqi acceptance of the US sanctions and then Iran’s demands for war compensation has divided the Iraqi street into two opposing camps.

Pro-Iranian Shiite parties and militias slammed the prime minister for turning his back on Iran and supporting the hostile US position against Iraq's neighbor.

The Iraqi Shiite militia Asa'ib Ahl al-Haq said in a statement Aug. 8, "We regret the issuance of such a position by the Iraqi prime minister, and we believe he did not need to commit himself and oblige the Iraqi state to such a commitment, especially as his government is working outside its electoral period and without parliamentary cover." The militia said, "This position is not binding to the next government, which we hope to be based on Iraqi interests and will take into account the sovereignty of Iraq and not be part of the Trump administration in its reckless policies regarding the region and the world."

Hassan Salim, a leader in the Fatah coalition, which came in second in Iraq's still-inconclusive May elections, called on the Iraqi government to "repay Iran's favor," referring to the help provided by Iran in removing the Islamic State from Iraqi territory.

Mojtaba al-Husseini, the representative in Iraq of Iranian Supreme Leader Ayatollah Ali Khamenei, launched an attack on Abadi because of the prime minister's stance on US sanctions against Iran, calling him an irresponsible and defeated character. A prominent pro-Iranian cleric in Baghdad, Jalal al-Din Ali al-Saghir, also criticized Abadi's position of supporting an unjust action against "a Muslim country and neighbor and ally of Iraq in all its positions." Saghir called Abadi's decision a scandal that cannot be covered by any pretext. The grand Sunni mufti of Iraq, Mahdi al-Sumaidaie, who is close to Iran, also slammed Abadi. Sumaidaie said he will be the "first to support Iran against US sanctions."

Meanwhile, the Iraqi Foreign Ministry, in an attempt to repair the gap between Iran and Iraq, issued a statement Aug. 8 criticizing US sanctions on Iran and expressing Iraq's gratefulness to Iran for supporting Iraq in fighting the Islamic State. Abadi's office also had announced that he would visit Iran and Turkey very soon to discuss Iraq's relations with the two neighboring countries, but the visit to Iran was later canceled due to his busy schedule, which indicates escalating differences between the two countries.

On the other side of the divide in Iraq, several politicians criticized Iran for demanding war compensation in reaction to Iraq's announcement to abide by US sanctions against Iran. Jawad Boulani, a former Iraqi interior minister, said in an interview with the Al-Sharqia TV channel, “It is Iraq’s legitimate right to follow its own interests in its relations with other countries and Iran has no right to complain or ask for compensation. The Iraqi government should put an end to Iran's illegitimate demands for compensation.” It is worth mentioning that UN Security Council Resolution 598, when ended the eight-year war between Iran and Iraq, did not oblige Iraq to pay compensation to Iran, and that the negotiations between the two countries over the war ended in 1991.

Iraqi member of parliament Faiq Al-Sheikh Ali also replied to Iran’s demand for war compensation from Iraq, saying, “On behalf of the families of the victims of terrorism, I ask Iran to pay compensation for 1 million Iraqis killed when Iran brought al-Qaeda to our country beginning in 2003 under the pretext of fighting the Americans.” He also called on the Iraqi government to consult with the UN in order to receive a legal opinion regarding the Iran-Iraq war compensation.

Finally, the rising tensions between Iran and Iraq regarding the US sanctions against Iran indicate that Iran will use all its means to bring one of its allies to head the new Iraqi government in order to prevent Iraq from getting closer to the United States. As Abadi has already made his decision to stay in the US orbit and distance himself from Iran, the Islamic Republic will do all possible to replace him with a Fatah or another Islamic Dawa Party leader who is closer to Iran.